Skip to Content
0 shares
I should have never hoped for rain.  Because it’s pouring at our house!!!  Okay, not really, there is no rain, but it’s hard to maintain a positive attitude today.
You see, Baby D had a fever and ear infection Friday and Saturday and is recovering now.  Monday, Daddy got sick, had a fever and was bedridden for over 24 hours.  Then, Tuesday, Captain Fussybuckets developed a high fever.  I took him to the doctor and it was determined that he has strep.  So, that’s probably what Daddy had, as well.
Now, ear infections stink.  But they’re no where in the league of strep.  I had NO idea how awful strep is.  A two year old with strep?  Miserable doesn’t even come close to describing it.  Tuesday night, he was waking up crying every hour.  Finally at 3:45, I told Daddy to go to his bed and bring Fussybuckets into ours so one of us could get some sleep.  Last night even coming close to his bed caused a fit, so I went to bed with him in our bed at 9:30.  Thank goodness, because he was up every hour, or more often, again last night.
The worst part is that there is NO consoling a child with a sore throat.  He doesn’t understand why he’s feeling the way he does, there is nothing in this world that can take his pain away except for time.  Sure, Motrin, Tylenol, Chloraseptic all take away a little of the pain, and antibiotics work (hopefully) over time, but we, as parents, just feel completely helpless.  He’s still completely miserable and has eaten very little over the past few days, and slept very little, too.  Add that all up and it’s one cranky little dude.  He did manage to eat two cheese slices today, and is drinking water, but other than that, he wants to eat, he’s hungry, but everything makes his “throat burn.”  He’s frustrated, we’re frustrated, we’re all cranky and miserable.  Daddy is feeling better, so he’s working, but it’s hard for him to do anything work related because he’s worried about his family.
To make matters worse, and yes, this is just me complaining at this point, but there’s a water leak in our neighborhood so the water has been out for 2 hours.  How’s that for icing on the cake?  Try completely knocking out the germs with no running water!
I keep reminding myself that things COULD be worse.  I could still get sick and be completely incapable of taking care of my kids.  I’m not out of the woods yet.  So, if you’re the praying kind, please say a quick prayer that I don’t get sick.
Thanks for listening to me whine!
One more thing….we woke up this morning to this on our back porch: 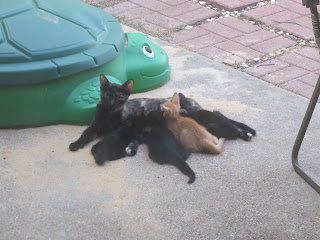 Cute, right?  Granted, it did make Captain Fussybuckets smile, which the smiles have been VERY few and far between these past few days.  But, this momma got a little annoyed because a) I’m allergic to cats and b) that’s a sandbox they’re sitting next to.  The lid is on, but of course I’m freaking out that they’re using the sand as a litter box!  arggggh!  Oh well.  I’ll try to be nice to these kitties.  But I am NOT feeding them!
Click here to cancel reply.

Oi! You poor thing! That does sound horrible. I hope everyone gets better soon =) And yeah, even with the lid on, I'd be freaking about the sand/litterbox thing too.