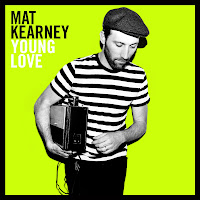 I had the opportunity to listen to the new album by Mat Kearney called “Young Love.”  I’ve been out of touch with the new music scene since having kids (bad excuse, I know!) so I had never heard of him.  But after listening to this album, I can honestly tell you, he’s GOOD.
The first track “Hey Mama” is very contagious.  It’s one of those feel good songs that gets stuck in your head, but you don’t really care.  Totally addicting!
The the second song “Ships In The Night,” Mat’s “rapping”/”talking” reminds me of Everlast from the 90’s. (I don’t listen to Everlast, I just know what he sounds like. :o)
The rest of the album I would categorize together.  The first two songs sound different than the rest.  The rest of the album is GOOD, don’t get me wrong, but the first two songs are a change from the rest of the album.
To sum it up, Mat’s album is very easy to listen to.  There are upbeat songs, slow songs, and all seem to have a very good story behind them.  It’s not the kind of music I usually listen to, but I found myself singing along and enjoying it anyway.
I recommend buying “Young Love” today!  Also, check out Mat’s website:  www.matkearney.com (remember! Mat with one “t”!)
Enjoy!

Disclosure:  I received a digital copy of “Young Love” by Mat Kearney to review.  All opinions in this post are all mine.

Hi stoppin by from the blog hop. Im now following you via GFC. Please follow me back at http://jessycaspage.blogspot.com/Have a great rest of the week!

Wife on the Roller Coaster

What a cool song! I'm always in the market for new music. THanks for sharing!

I'm a new following from the blog hop. Nice to meet you! Hope you can stop by and say hi. :)