A few blogging friends of mine and I were chatting about Baby's First Birthday.  What did you do/are you doing for your baby's first?  Is it a big gathering for everyone you know, or something low key?  Here's what was said:

Ashleigh: My son is having his first birthday party this month and it is Yo Gabba Gabba theme with a pinata, lots of decorations and grab bags for the other kids. However on his birthday we are going to the Museum of Play with a few of our friends and their children so all the kids can have a blast!

Sarah: Ours was a family day. It was kind of disappointing that neither of our parents made the effort to come to our daughter's first birthday. Understandably we lived several states away from them but still, I would have thought they would want to be there.

Emily: Is it weird that we had a mid-day cocktail party? My mom baked and decorated a baseball cake & cupcakes, and I hung baseball themed decorations, and there were presents, too. But really, I wanted the first birthday to celebrate all that The Texan and I had accomplished together during the first year of The Boy's life. We invited family and friends and grilled in our backyard while everyone enjoyed homemade watermelon margaritas. {And they were delicious, too!}

Gena: Both of my boys had an extended family birthday that was simple and fun. A few gifts, food, and a cupcake smash and it was a great time!

Darcy: I threw a Halloween birthday party with awesome decorations and themed food that I made. We invited friends and family. Invites were sent out well in advance but I was very disappointed in some of the family that didn't attend (aunts/uncles of Rissa). I mean it was her first bday and some of their excuses were meh in my opinion. She might not remember but I do! One thing though was I hadn't allowed her to have cake until then, but she barely touched it. I was hoping for a fun mess.

Kathleen: We just invited family and did a very laid back party. Ice cream cake, presents. We didn't do decorations or goodie bags this time. He won't remember it anyways.

Leila: We had everyone (family and family friends) over for a dinner plus gift opening and cake. I made the cake, but we purchased a smaller cake just for them to dive into. Because it was their first birthday and they didn't have "friends" (and won't remember it) we just made it special for them. We do this every year (minus the individual cake thing) until they reach school aged where they finally make friends.

Mary: I am a strong beliver that the first party is way more for the adults in the babies lives then the baby. We were celebrating all of our accomplishments (like making it through the first year) with the people who care and geared the party to that as well as the food, the drinks, the invites, etc. (btw… Emily love the cocktail party!) Anyone who says that the party is for baby makes me laugh and as Leila pointed out – they don't have friends 🙂 I sort of feel that way about the second and third birthdays as well, but at least they are more aware that the party is for them.

Ghada: not weird at all that you did cocktails. It is nice to create memories, but at the end of the day the child is not likely to remember except through pictures/videos, however you capture the day. We did a very small get together with a cake, one set of grandparents and a few friends. As he's getting older, we are doing more – giving him more of what he wants.

Lena: I went all low key – just a trip to the restaurant with family. But I did 1 year old photo shoot. Lots of pretty pictures. Who knows, they might love or hate me for this 15 years from now

Valerie: My first child I went all out but the second got a very laid back day which wasn't even a party really.

Thank you for joining the conversation Ashleigh of Living Off Love and Coffee, Sarah of East 9th Street, Emily of Nap Time is My Time, Gena of Life With Captain Fussybuckets, Darcy of Tales From the Nursery, Kathleen of Callista's Ramblings, Leila of Life as Leels, Mary of iNeed a Playdate , Ghada, Mama goes BAM, Lena of Way2Goodlife, and Valerie of Valerie's Reviews 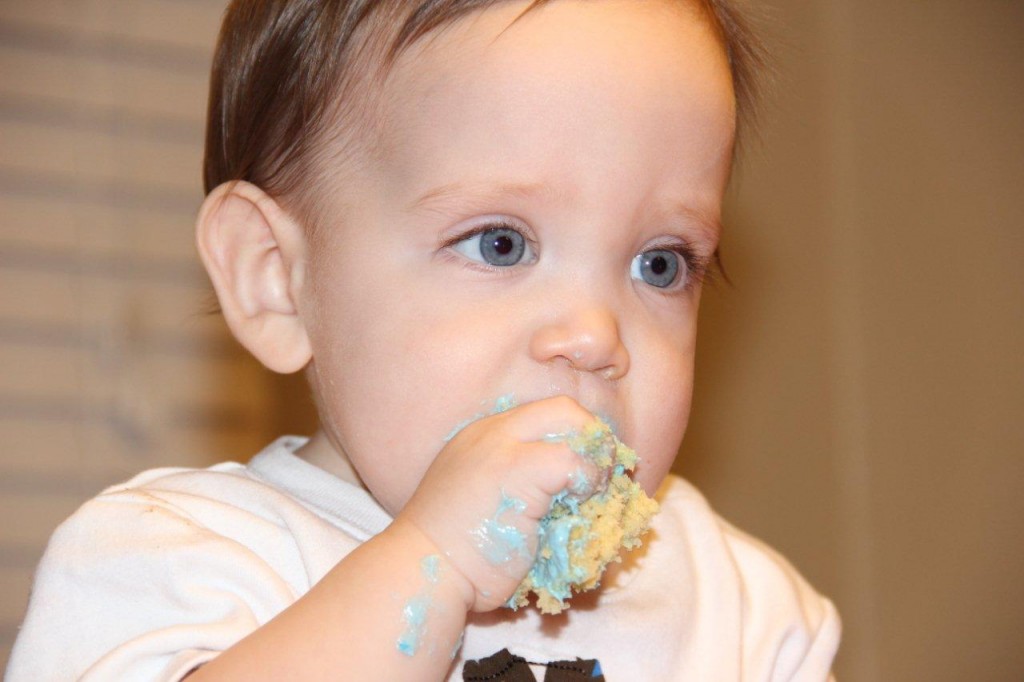 How cute!  I love first birthdays!