Skip to Content
0 shares
Captain Fussybuckets has been in a big boy bed for about eight months or so.  He hasn’t always done well.  He started off great and for the longest time, it was just like he was in his crib.  He didn’t realize he could get OUT of his bed until a few months ago.  He didn’t abuse this until recently, however.  Up until a few weeks ago, he’d still call for us to come get him out of his bed when he woke up.
Well, that was then.  Over the past few weeks, he has started turning the doorknob on our bedroom more and more with each passing night.  We always put him back in his bed, unless it was after 6 and we knew he needed more sleep (as did we!) because he went to bed so late the night before.  BUT when he turned the doorknob after 6, it was sure to wake Baby D up in his own room (because he is very loud and it is usually followed by door slamming.)  And he did NOT go back to sleep.
Last night we decided to bust out the baby gate, per “Solve Your Child’s Sleep Problems” by Dr. Richard Ferber.  Dr. Ferber bought us some extra sleep when CF was super young and waking every 45 minutes or so.  So, I busted out the book again and it says:  “When your child is unable to control his behavior by himself, you have to set limits for him and enforce them.”  Okay, got that.  He goes on to say that some kids can be coaxed with rewards.  We tried the sticker chart thing and yeah, that was a bust.  Who cares about a sticker when they want their Mommy & Daddy at 2 AM??
He also says that kids cannot be expected to have self control on their own will in the middle of the night.  That is the hardest time to have self control, and it’s true.  And children should not be punished or threatened in the middle of the night because they don’t have self control and are just in a bad habit.
So, back to the limit setting.  Dr. Ferber talks about using a baby gate to keep the kid in the room.  So last night, we busted out the baby gate.  We explained to the Captain what it was all about, and what the purpose was.  He was excited.  We agreed to leave the door open so he wouldn’t open the door and forget about the baby gate and run into it.  We left a light on and it took him about 40 minutes to fall asleep with all of this excitement.  Then, we went to sleep around 10.  Then….
At 2:30, the doorknob turns.  It was Captain Fussybuckets.  I was shocked because I didn’t hear any noise prior to that and I had no idea how he got over the gate.  I took him back to his room, and there was his IKEA kid’s chair.  DUH!  I didn’t take the chairs out!!
Well, long story short, he would not go back to sleep.  Over an hour later, after many talks with Mom & Dad, he burst into tears for the thousandth time and I decided that enough was enough, that we had to have our sleep.  I know, any form of sleep training is hard and you have to stick with it.  But anyway….I brought his stuffed couch bed in our room and put it at the foot of our bed.  He brought his light up turtle, blanket, and pillow.  And he went RIGHT to sleep.  I, of course, did not.  He had put his turtle on his tummy, and with every breath, the stars danced on the ceiling.  So around about 4 AM, I went to his bed.  And then, I proceeded to have the best 3 hours of sleep I had acquired in a loooooooooooong time!!!  He stayed on the floor the rest of the night morning and Daddy slept well, too.  Then, Baby D woke up at 7 and I got up with him.  He hasn’t slept in that late in a long time, as well.
So, what’s the problem?  Well, I’m just stuck.  He needs to be in his bed.  If we are all in our beds, we all sleep better.  I can’t sleep well with him in the floor.  Daddy and I both can’t sleep with him in our bed.  (Seriously folks, it’s like sleeping with a rabid octopus.)  But I have a hard time going back to sleep with him coming to our room every 2 hours.
Daddy and I both have very important jobs.  While my job is staying at home taking care of the boys, I think everyone can agree that it’s important that I have enough sleep for this job, even though I don’t leave the house.
So what’s the answer?  Should we keep on returning him to his bed, bribing him with stickers and treats, hoping that one day it will click?  Or should we just set up his couch bed in our room for him to come lie on when he’s scared or wakes during the night?  Or does someone else have a brilliant idea that we haven’t tried?  Remember, he’s two, so I don’t want to scare him back to his bed with threats.  That’s just not a good idea because he’s not old enough to understand or have self control to not come to our room.
I know, all of you co-sleepers are laughing at me.  ha!  Seriously though, co-sleeping would be more of an option if, like I said, he wasn’t a rabid octopus!!!!  hahahaha! (but there is a solution for that – Magic Bumpers!)
Anyway, your thoughts & comments are welcomed!  I’d definitely like to hear what others have to say!  He’s always been a not-so-great sleeper, but it’s sad when your almost 3 year old is waking as often as a newborn and your 8 month old is sleeping through the night. *sigh* 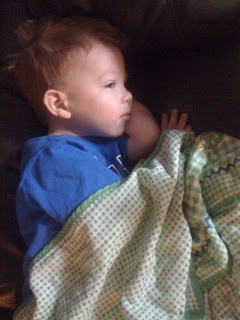 The Boy That Never Yawns - Life with Captain Fussybuckets

[...]  This is the kid that STILL​ wakes up in the middle of the night and comes to sleep on a tiny fold out couch on our bedroom floor, which CAN'T be quality [...]

Ha! He's a smart one. I don't think I would have thought of using a chair to climb over the gate.

Thanks for dropping by!

Sorry not sure how I deleted that here we go again...Hi I found you at a blog hop and am following along maybe you could pop by and meet us too! As I am typing this my almost 7 month old and my 6 YEAR OLD are in my bed. Hubby is working tonight so it is just me and the 2 kids. When He is home the babe sleeps in his bed fine. When I put him down he cries and cries when my husband does it not a problem I think it is because I am the food source. As for my 6 year old well he has the best excuse ever but we are still trying to break the habit. A year and a 1/2 ago he had a large cancerous tumor removed from his brain one of the conditions of him coming home was that one of us sleep in the same room as him. They were worried about him getting up in the night and falling. Anyway he no longer needs the supervision but the habit has been formed. All that to say I am not the best person to be offering advice. I once read in a book that children need to see Mommy and Daddy together. With Dad at work all day etc. The suggestion was for Mom and Dad to have 15-30 minutes of couch time together in front of the kids. Then go through a normal bed time routine. Explain the routine that they need to sleep in their own room etc. The theory was once the child sees the regular interaction between Mom and Dad they don't need to get up at night to see them together personally sounds a little werid but anything is worth a try :) Hope you gets some ZZZZZ!

Zoey went through this same thing and I think it might have been about the same time or a few months earlier. Did really well switching to a big girl bed and then all of a sudden, not so much! We wondered if she was having nightmares or something because she was REALLY upset. So after several sleepless nights we did put her crib mattress on the floor in our room. It lasted a few months probably. We always started her out in her own bed and most often, she found her way to our room and just snuggled herself in and she went right to sleep. It might have been cheating on our parts, but we were so tired after weeks of losing sleep and arguing in the middle of the night! Then one day she just stopped coming in and stayed in her own room. Now we've moved on to other sleeping issues, but I guess they go through stages and we just have to roll with it!