It always amazes me how different each of the boys are.  They really do have different personalities, likes, dislikes, and of course, funny sayings.  Lately, D (4.5 years) has been obsessed with the game – Chutes and Ladders.  He has played it with different people, but God bless Grammy for playing with him over and over and over again when she came to visit a few weeks ago.  Oh, to have a grandmother's patience! 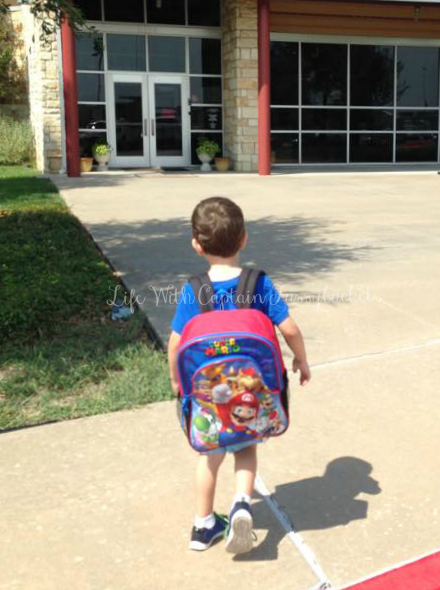 D started half day pre-k yesterday.  He has stayed home with me all of his life, except the two times he went to Parents' Day Out (it was his idea to go so after he didn't want to go anymore, and since the rest of us minus Daddy were staying home, I let him quit.  Some may say that was bad, but I wasn’t going to force a three-year-old to go if he doesn't want to.)  He also went with his older brother three hours a week to "school" with a teacher friend from church, which was a very beneficial supplement to homeschool.  He learned so much and had fun, but he was also the only other student besides the Captain.

So, I NEVER thought he would actually enjoy pre-k.  Monday was the first day and he didn't shed a tear.  In fact, I was kind of hanging around his chair as he began coloring his paper and he turned to me and said "ok, you can go now."  I was SO proud of him, but yikes, rip my heart out, kid!  Yesterday there were near tears, but he ended up having a great day and even earned a certificate for good behavior!  He can't remember what he did to earn it, but hey, he's four. So what's the key to his success?  I'm not sure, but I do know that his distraction and motivation has been Chutes and Ladders.  We played about five games on Sunday night before school started the next day.  We played Monday morning.  We played Monday night and Tuesday morning, as well.  Daddy played with him when he got home from work.  D wins probably 90% of the time, it's crazy.  I mean, it's a game of counting and chance, but it's not really something you can be considerably better at and always win, but he's really good and I can't figure out how he does it!

Chutes & Ladders has helped his math skills.  It is impressive to watch him recognize numbers, count spaces, always go the correct direction and…even correct us when we accidently go the wrong direction!  Numbers is definitely his "thing."

What astounds me about playing this game with D, though, is his outlook on it and the amount of encouraging he does for us.  He is so optimistic.  There's a HUGE purple slide going down the middle of the board.  Once you climb to the top, if you get that slide, ("chute") then most would feel a sense of failure and just know that the game is lost.  But D….he says "at least I have a chance to get the tall ladder back up to the top now!"  He is always strategizing and seeing his options and possibilities.  He hasn’t uttered one negative word about how much it stinks to almost win and then have to go down three slides in a row.  And when I say “ugh!” when I get the big purple slide, he says “Mommy, at least you still have a chance to get the big ladder now!”  He looks at it as an opportunity, not a failure.

What a great way to look at things, in the eyes of a four-year-old.  If life makes you go down a huge slide when someone is one spin away from winning everything, it’s okay.  There’s still a chance for you to make a comeback because you could get the big ladder!

I hope D keeps this attitude and applies it to his daily life.  He has always been the more laid back of our three kids and being an anxious person myself, I am thankful that he can have that peace, as well as the optimism.

Just remember that it’s okay if you have to go down the big slide…because you still have a chance to climb the big ladder.