It's hard to believe that Hubby and I are the parents of three boys.  Baby Brother is eighteen days old today and as always, I cannot believe it has been that long since I woke up at 5:50 AM and as I was getting out of bed, my water broke, and we headed to the hospital.  It was a quick and easy labor and delivery, which I felt I was due after long and difficult labors with the other two, ha!

Lots of people have asked "is he a good baby?" to which I reply "as good as a newborn can get, I guess."  What a difficult question!  I think he's perfect and the only babies I have to compare him to are his brothers, which were about the same.  The Captain was probably a lot more "difficult" in the first few days but that was due to feeding issues and us just being new parents.  It happens.  It wasn't his fault.  I think all three of my sons were "good babies" but if they weren't "good," then it wouldn't be their  fault.  I dunno!

Baby Brother (that's the best nickname I could come up with, yes!) is a grunter, however.  He grunts in his sleep.  He grunts to get out of his swaddle.  He grunts when he's not swaddled.  I know newborns make a lot of weird noises and that's normal, but it is a bit difficult sleeping with his grunting going on two feet away from me.  At least he sleeps well, so far.  I always say that my boys starting waking up more and getting tricky with their sleeping habits at about 6 weeks, so I am enjoying the time before we hit that mark!  🙂

The Captain and D are still blissfully in love with their little brother.  The Captain asks to hold him about 10 times a day and will sit and hold him, look at him, and smell his little head for about 5 minutes at a time.  D loves to hold him, as well, but his max is about 20 seconds before he says "I'm done." or "he's fussy!  he's fussy!"  But, D is the master of the paci, or "meh" as D always called it.  He gently puts the paci in Baby's mouth and instructs his brother to take it.  It's pretty precious.  D is still in love with his "mehs" even though he turns three next week, yes.  It's a special bond the brothers have, I suppose.

We haven't been out too much, with the ice storm and cold weather, but we have made it to Target once as a family and church a few times.  Baby Brother has done well and Mommy hasn't lost her mind yet, so I guess we are doing okay!

Thank you for all of your well wishes and congratulations!  Thanks for bearing with me as I post the bare minimum so I can enjoy time with our three amazing sons! 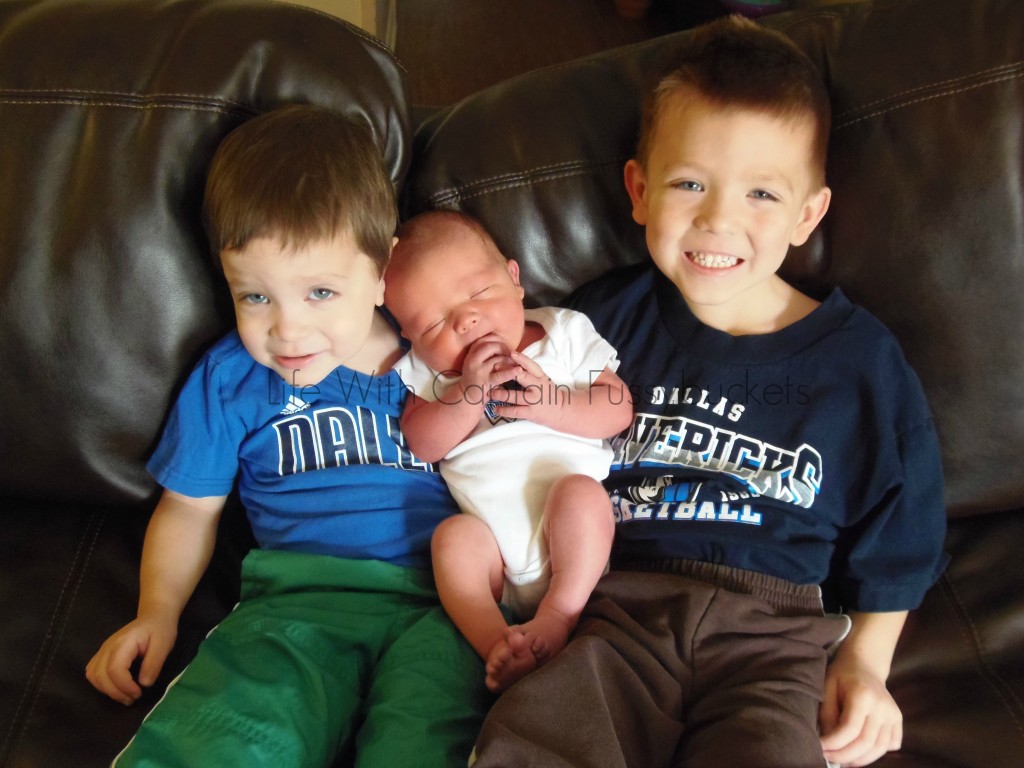