I can think of many times in my life that I was a nervous wreck.  I have always been a bit of a worry-wart, so these nervous times are pretty commonplace…from job interviews, to speeches, to evaluations while I was teaching, to my own wedding!  The times when I have been most nervous, however, have been times when I was completely out of control of my kids’ well being.  When I went to the hospital with contractions to have Captain Fussybuckets began the most nervous I have ever been, I believe.   Being my first time, I didn’t know what to expect, even though I had done a ton of reading and we even went to childbirth class, I truly had no idea.  When we got to the hospital, a day after my due date, they were about to send me home when they decided to monitor his heartrate a bit.  After doing so, they discovered that his heartrate wasn’t where it should be.  After I had a contraction, it took too long to get his heartrate back to normal, so they decided then to induce in the morning.  All throughout my labor, we had a bunch of scary moments.  The nurse couldn’t find the heartbeat, his heartbeat was extremely low, my epidural wasn’t working correctly, and finally, many hours later, the Captain was born with the cord wrapped tightly around his neck three times.  The doctor clamped the umbilical cord to cut it and it burst, spraying blood all over my hubby.  Of course, we had NO clue what was going on and even though the doctor was calm and collected, we were worried and super nervous.  Add in the fact that Captain Fussybuckets didn’t cry for what felt like FOR-ever, THIS was the most nervous I have ever been in my entire life.  Not until we heard him cry and then I got to hold my sweet baby did I feel relief.  But, I suppose moms and dads never get real relief from those nervous moments.  There have been many times we have worried about our sons and they’ve done things to make us very nervous, but we have learned to just have faith that everything will be okay.  It definitely doesn’t get easier and I’m sure it never will! 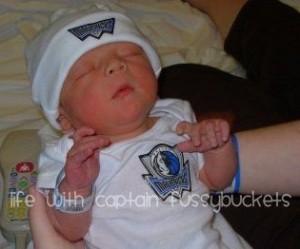 What has been your most nervous moment?

Do I have to pick one? My daughter too was born with the cord around her neck. During labor, her heart rate kept dropping. When she was born, it took a while for her to cry and she ended up having a hole in her lung from gasping for breath when she came out all choking! :( On top of that, she started having breathing spells at 9 months that appeared like seizures (she'd hold her breath and in turn her body would shut down - blue lips, eyes rolled back in head, stiff body). That lasted until 4ish. And then, oh and then, the seizure she did have after she fell from the top of the slide this year at school. That's just my daughter (now 6). My son... oye. He has more scars than me and he's only 4! He cut his eye open on the bath tub at less than a year old; cut his wrist, arm and thumb on a vase he broke at the nanny's house; and had stitches in his eyebrow - all by age 3! My kids are going to give me gray hair with all of my nervousness!

holy cow, Leila!  They need to live in a bubble for a few days to let you rest!

Oddly, my fear with having my first baby was using the bulb to pull snot from his nose.   Nothing else bothered me or made me more nervous then thinking about that - until I actually had to do it.  Cute pic!

haha!  We only used the bulb a number of times.....I hate that thing almost as much as they do!

I'd have to agree with you - my most nervous moment was the birth of my son. His heart rate was dangerously low, he wasn't responding at all, my blood pressure was very high and the doctor came in to tell me I needed an emergency c-section and then she said the worst thing I've ever heard "I don't know if he will make it...all I can say is that I will do my best".  That was by far the worst and most nervous point in my life. Thankfully he was born without any issues at all. :) By the way - beautiful baby photo above! :)

thank you!  And thank you for sharing your story!  I'm so glad he's okay now!

I share the same story with you. I was a nervous wreck during the birth of my children. In a way, I was more nervous to second time because of the roller coaster I went through the first time. Thank goodness both boys are healthy today.