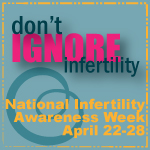 If you read my story yesterday, you read that I “met” a lot of women going through their own battle with infertility on the message boards at Fertility Friend.  One of those friends that I met during this time was “Sarah”.  Coincidentally, she had her baby girl a month before Captain Fussybuckets was born, but the journey it took to get there was a long one.

Sarah had heavy, painful periods since her late teens/early 20’s, but her doctors just said to take medicine to ease the pain and that was it.  It wasn’t until she and her husband started trying to get pregnant that she realized that the painful periods were not normal.  It took a miscarriage and over a year of actively trying to get pregnant for Sarah to finally reach out to an RE, a Reproductive Endrocrinologist, to get some answers.  Sarah was over 35 at that time, which made it more obvious that she needed the help of an RE.

The RE told Sarah that she had endometriosis, a condition in which cells from the lining of the uterus grow outside of the uterine cavity, most commonly on the ovaries.  Endometriosis is fairly common in women who struggle with infertility.  Sarah’s RE recommended a “lap,” which is short for “laparoscopy.”  A lap is a surgical procedure in which a camera is used to look inside the abdominal cavity.  The RE also removed some tissue and adhesions caused by the endometriosis during the lap.

A month after the lap was perfomed, she became pregnant and had a healthy baby girl as a result!  The procedure was all it took to erase some of the endometriosis enough to get pregnant.  Sarah and her husband feel extremely lucky because this kind of surgery doesn’t always produce these results so fast, but for them it did….twice!  Sarah recently had another lap after trying to get pregnant with a second child for some time.  Again, they were lucky enough for it to happen the very next month.  Our thoughts and prayers are with them to have another happy and healthy pregnancy!

Sarah wants my readers to know two huge things in the world of endometriosis.  One, a big sign, other than the painful periods, is painful intercourse.  If you’re having these two issues, please consult with an ob/gyn and specifically bring up endometriosis.  She also feels that endometriosis is not talked about enough and many ob/gyns don’t know enough about it and often times shrug off women’s complaints of pain because every woman, at some point, has had pain during menstruation and intercourse.  But endo is more…..and if you’re having constant pain, please find a doctor that will listen.  For more information about endometriosis, please go to The National Infertility Association’s Resolve website.