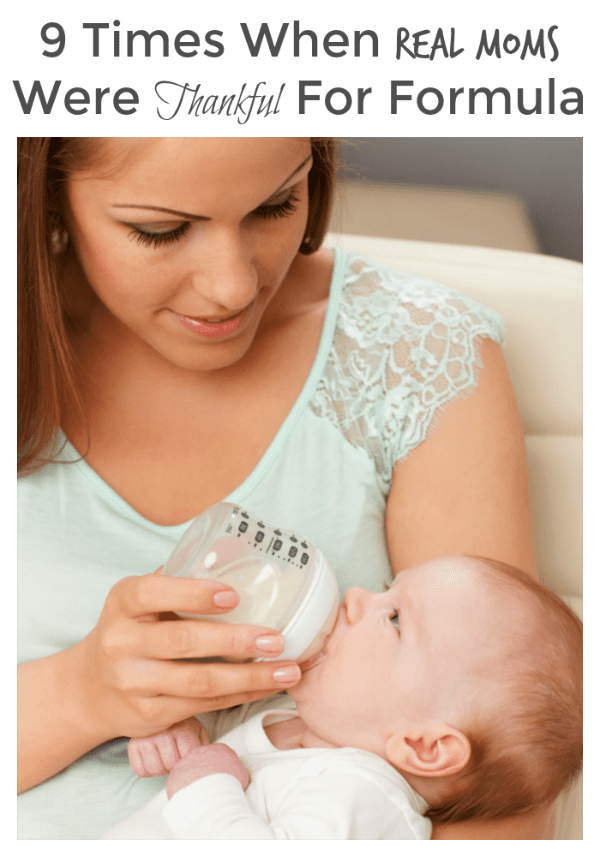 Every baby is different.  That reason right there is the very reason I began this blog over five years ago.  After three babies, that is more true today than it was then.  We did a lot of different things with each of our three babies, but one thing that was a must was supplementing with formula. We are so lucky to live in a day and age where we do not have to worry about giving our babies good nutrition!

I asked my friends to share their positive stories of formula and why they were thankful for it.  Here is what they said:

Nine Times When Real Moms Were Thankful For Formula

One of the things that was great about formula was that I was super sick for an extended period of time and Chris was able to help feed Mackenzie by giving her a bottle of formula.  ~ Susan

Formula was a huge help. I was unable to purely breastfeed twins. Having 1 bottle of formula right before bed helped them stay full longer during the night and helped me have a better pumped milk supply.  It was a great backup in case I needed to be on medication that would be not safe in breast milk. 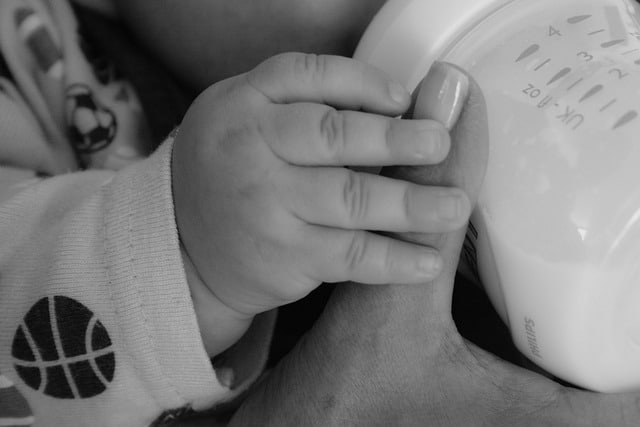 When my son was diagnosed with a cows milk allergy at 3 months I was extremely happy that there was a formula that he could have that was safe for him that didn’t cause him to have blood in his stool. This also came at a time when I had just started back to work full-time and going on an entire dairy free diet myself was just not something I could do easily. ~ Keriann – Toy Queen

When Jason was 2 months old, and diagnosed with dysphagia I was so grateful to have formula to supplement. I found it nearly impossible to keep my supply up without skin to skin contact.

To know there was an option, to know that I had choices, as helpless as I felt in the whole situation, was really empowering. ~ Amanda

I was able to breastfeed all three babies, one until 4 months, one until 2.5 years, but they all required formula supplementation as babies because I simply didn’t produce enough.  I have always been thankful for formula to help my babies thrive. I pumped every 3 hours around the clock for 4 months. I barely stayed ahead of my son’s needs. Finally I was just done. Emotionally and physically too exhausted to do it any more. I quit pumping and switched to formula. We were both happier. I was now able to snuggle him while feeding him instead of propping a bottle with my feet while pumping in the middle of the night. ~ Anne

Exclusively breastfeeding made my PPD so much worse. I couldn’t produce enough while pumping so I could never keep up with her needs and had to go back to work when she was 10 weeks old. Having formula saved my sanity honestly. Her dad would give her a bottle in the middle of the night so I could get a solid chunk of sleep, I’d nurse as much as I could, and pumped at work. I nursed for 13 months because I supplemented with formula. I never would have made it that long without it. ~ June

That both is ok and killing yourself make breastfeeding happen, losing sleep, not healing is far worse for your baby…  ~Maurleen

Now that we know how valuable formula can be for our little one’s health, how do you know which formula to choose?  What are the nutritional benefits for using formula?  Stage 1 Gerber® Good Start® Infant Formula is designed to provide complete nutrition during each stage of development. Comfort Proteins® allow your baby to get complete nutrition.  Vitamin D, antioxidants, and iron for healthy growth and development is in each bottle.  It is also easy for tiny tummies to digest. Stage 1 Gerber® Good Start® Infant Formula is modeled after the proteins found in breastmilk and made to be gentle on a developing digestive system. Furthermore, it is all Non-GMO! 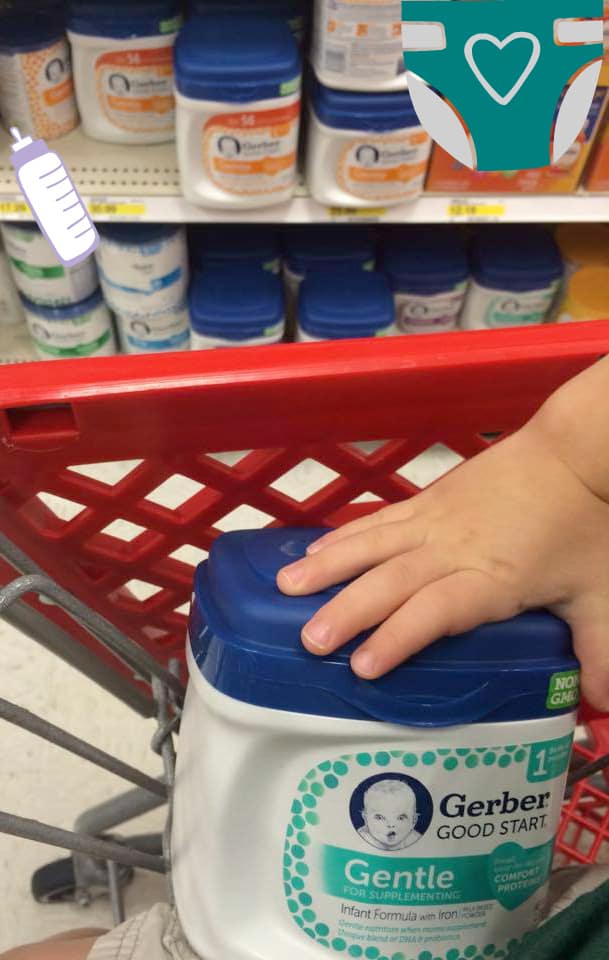 Rest assured that Gerber® knows tiny tummies. Our oldest was colicky for awhile, until we adjusted is formula.  Every baby is different, and Gerber knows that.  The Gerber® Good Start® Staging System has a great range of products for your baby’s specific needs.  All Gerber formulas provide proper, expert-recommended nutrition and comfort to babies and parents, too.

Do you have a story about a time when you were thankful for formula? I would love to hear about it!

It's rare you find a positive article about formula, I love this. I formula fed my son and I supplement with my daughter. It means that I can have some time to myself and not worry about her being fed.

I breast-fed for 2 years and also used formula.  Formula feeding is a great way to foster the bond between baby and dad or grandma or other family and care-givers.

I agree!  It does not have to be one or the other.....formula serves a great purpose!  Thank you for your comment!