I don't remember the first time it happened.  I do, however, remember the last time it happened.  It wasn't pretty.    I remember many times that it happened.  One day, in particular, I was about 7-8 months pregnant with Baby D and I took an early Saturday morning trip to the store.  I also took along the 12 year old boy who was in our care at the children's home and Captain Fussybuckets, who wasn't 2 yet.  We had to go to get a few items, I forget what they were, but all CF wanted was a balloon.  And boy, did this store have balloons.  After all, he is a toddler. He didn't want to ride in the basket.  So I let him down.  Mistake #1.  This kid was running around like a wild banshee, finding things he wanted and then discarding them when something else caught his eye.  The 12 year old was getting annoyed.  I was getting annoyed.  I almost cried because I was sure no other child in the history of children was this horrible.

Before kids, I scoffed at the parents who would buy their kids candy and toys when they were throwing tantrums.  And somehow that day I got out without buying Fussybuckets anything, but I'll tell you, my mind was racing with what to get this kid to calm down.  Now when I see kids that are acting out in the store, I want to buy that kid a huge chocolate bar, just to make the Mommy (or Daddy or Grandma…) feel better.

Fast forward to a few days ago.  I left Baby D at home with Daddy (because let's face it, I'm a wuss and I avoid the two child, one adult grocery trip like the plague!)  Fussybuckets had just woken up from a nap, had a good snack and a drink, and we were on our way.  Since we just moved in, we still had a lot of stuff to buy, even though we had been shopping the week before.  There were a lot of "I wants" and "I wish I could haves," but every.single.time. that I said "not right now, please put it back…."   the 2 1/2 year old demon precious child of mine actually put whatever it was back.  (yes, I was letting him walk on his own, he's earned that privilege.  If he wanders or throws a fit, it's back in the cart!)  I was flabbergasted.  He actually put it back!  From sippy cups to cookies to random other things he thought he wanted…he always put them back.

The true test came at the end of our shopping trip.  M&Ms.  WHY ON EARTH DO THEY PUT CANDY IN THE CHECKOUT LINE?????  Seriously.  These people are TRYING to kill us, I just know it.  Anyway…..he grabbed some M&Ms.  (This kid loves chocolate like his mommy.)  Trust me, I was starving and wanted the M&Ms, too.  But I politely asked him to put them back, and he did.  He actually had a semi freakout because he couldn't find where he got them from.  It probably LOOKED like a train wreck to everyone else, but our groceries were bought with no candy and we both left, feeling happy.

I immediately called Daddy to brag about this awesome behavior. And some may frown upon this and call it counter productive, but whatever, it was my call.  A few hours later, Daddy went to the store and bought him some M&Ms at my request.  I explained to him that because he always put the things back at the store when I asked him to, I chose to reward him.  I made it very clear, though, that if he had thrown a fit, he would not have gotten anything.  (and hey, they were peanut M&M's, so there's a little nutritional value in there!)

Now listen.  I'm not saying that I'm a good parent or that his behavior is indicative of anything that Daddy or I have done.  Maybe he was just having a good day.  There have been times since then that he has been out of control and things we are still working on but that's what I've learned…that everything is a process.  I just have to remember to continually stay patient with him and someday his behavior will change.

And don't get me wrong.  I still think he's one of the most rambunctious, attitude-y, often times naughty 2 year olds out there.  But, it's all about the baby steps, right? 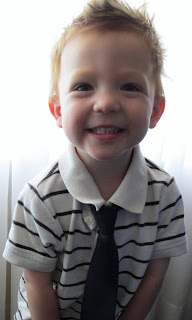 p.s.  If you see us in the store, and CF is having a bad day and throwing an epic tantrum, please just look the other way and pretend you don't know us, okay?  ha ha !!  Because it WILL happen again!

He is just so cute it's probably hard to say no to him. One of my grands is a hyper five year old boy. I love the time he spends with me. I have been teaching him about greed. Children are all so special. I enjoyed your story. Doylene

Thanks, Jeanne! It means a lot coming from you because you have taught him and know his true colors. hahaha!!!

Honey....I guess I missed the tantrums. All I know is that he, once again, put back everything I asked him to. Well, except that candlestick that we had to sneak away from him. Oh well. Baby steps. hahahahaha!

That little booger. I agreed with everything you said until I scrolled down and saw that picture of him. How could this cute innocent angel, make us think such horrible thoughts? haha, I'm sure that's what his grandparents are thinking. By the way, we did another big shopping trip today, and both boys did well. FussyB through a couple small tantrums, and baby D was too out of it to care. So, we took our sweet little time. Good call mommy! You deserved that grande, fat-free, mocha, frappuccino, cut the whipped cream. love you!

YAYYYY!!! What an awesome kiddo and what a great mama. :)