With the Captain's non-willingness to try hardly any vegetable, I'm always trying to think of ways to sneak in hidden veggies.  This probably has been done before, but here is my recipe for Baked Spaghetti with zucchini and butternut squash.

First, You take a zucchini:

Then I peeled it, but you can very well leave the skin on.  I just thought it would "hide" better without the skin.

Then I chopped it up, not too small, but not too big: 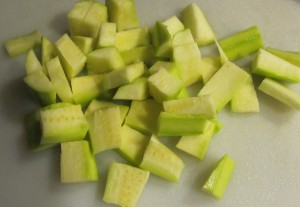 Then I tossed it in with the lean ground longhorn meat when it was about halfway cooked: 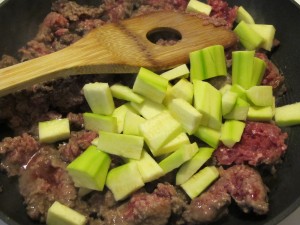 Then, when the meat was cooked, I added some spaghetti sauce, which often times has extra veggies already.

Then….I added three frozen pureed butternut squash cubes that I had in the freezer.  I like to add them to my spaghetti sauce because it makes it yummy and well, it's hidden!  No way would my hubby or my son touch butternut squash on it's own and it's likely that my hubby even knows it's in there. 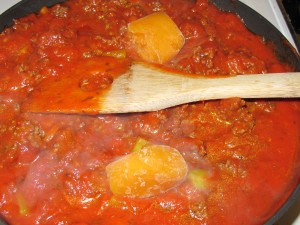 Anyway, so then you throw in some whole wheat noodles or our favorite – Barilla PLUS® noodles, made with golden semolina and flaxseed, spelt, oats, barley, and legumes!  (but you'd never, ever know it, I promise!) 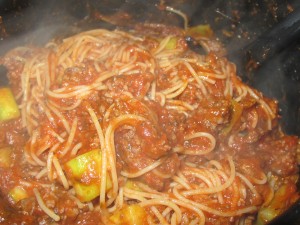 Then you put it in a casserole dish, sprinkle with mozzarella cheese and bake at 350 degrees for about 20-30 minutes or so.  I served our baked spaghetti with bread and zucchini cooked in olive oil with salt and Italian seasoning: 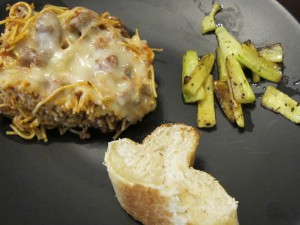 So how did my family like it?  The hubby loved it and asked to have it again.  He likes zucchini, though, so I knew he would like it.  Baby D gobbled up every bite including the zucchini!  He won't eat zucchini by itself, so this is a huge deal!  The Captain, however….I can't get one past him!  He picked out the zucchini but he did eat one on accident and was very proud of himself for chewing and swallowing it.  He couldn't pick out the butternut squash puree' though!  ha!

So, I call it a huge success!

How do you sneak veggies in to your family's meals?

[…] they can be a great side dish or a whole meal rolled into one.  Casseroles are also great for hiding vegetables in a delicious dish, using leftovers, or for busy week night dinners.  They usually […]

This looks so yummy, I love baked spaghetti!