The Captain LOVES to do artsy and crafty things and while I was a kindergarten teacher, I am NOT as crafty as the typical kindergarten teacher.  Lately he has been coming up with ideas of things he'd like to make and I've been assisting him as much as I can.  And lately he's had the idea that we  need to "sew" things.  I DO know how to sew, but I do not have a sewing machine, so, alas, I cannot sew him a police costume like he wants.  So, we settled on a police badge.  This is FAR from Pinterest worthy, but my friend Janet isn't scared to show her crazy crafts for kids and neither am I!

1.  Get an old cardboard box.  We seem to have a TON of these to spare lately: 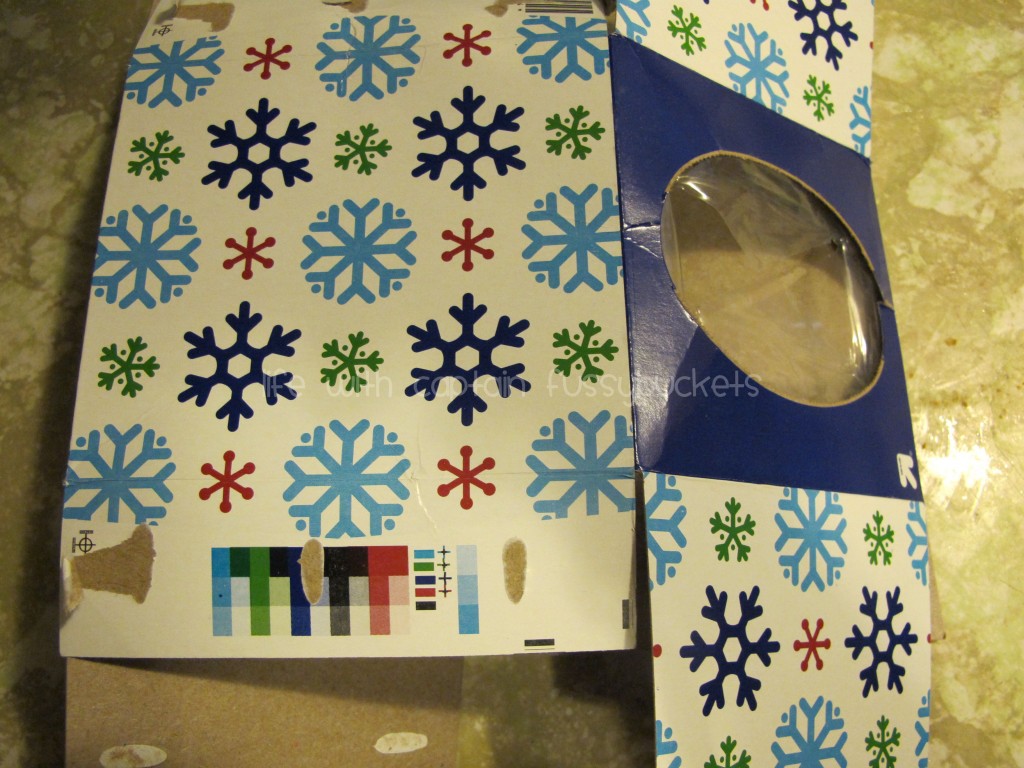 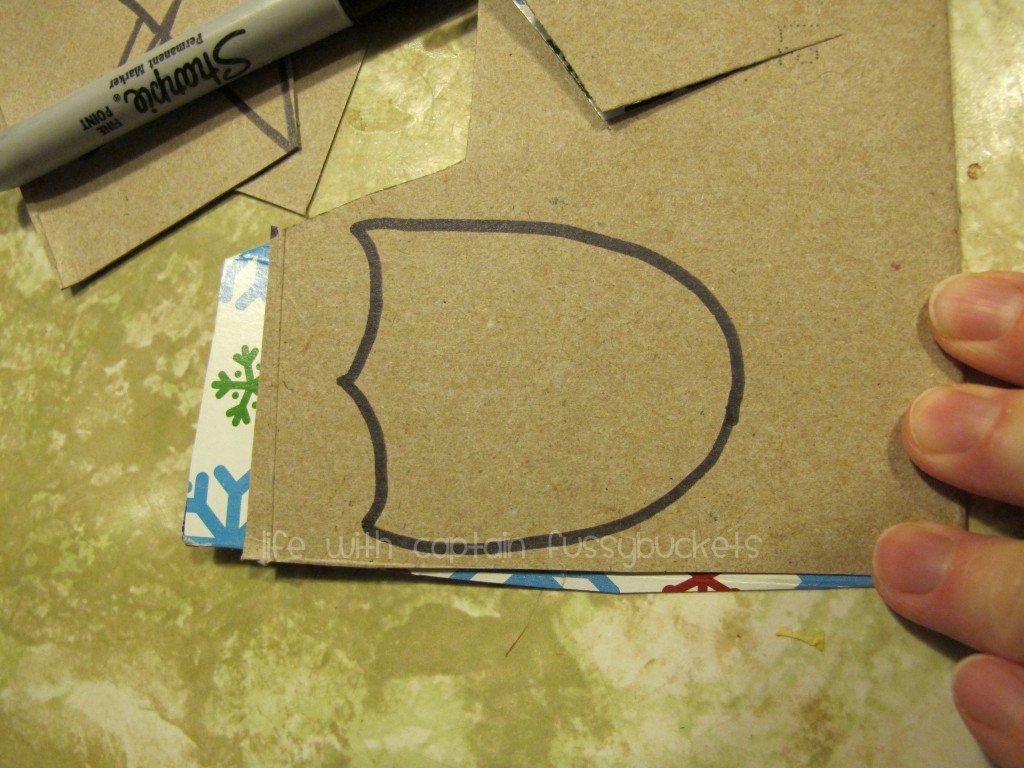 3.  Cut out badge.  I learned back in my teaching days that cutting out two or three at once is the fun, easy (lazy) way to do it.  Just stack two pieces together and cut! 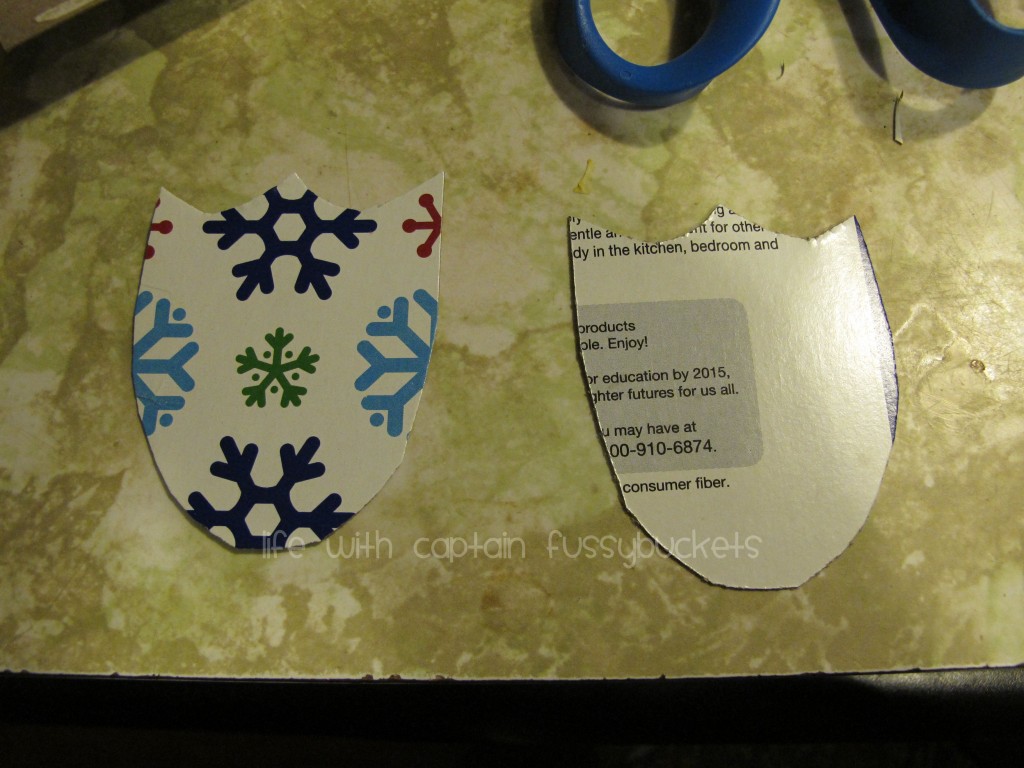 4.  Cover the badges with foil – something a four year old can do!  We used a small piece of packing tape on the back to secure the foil. 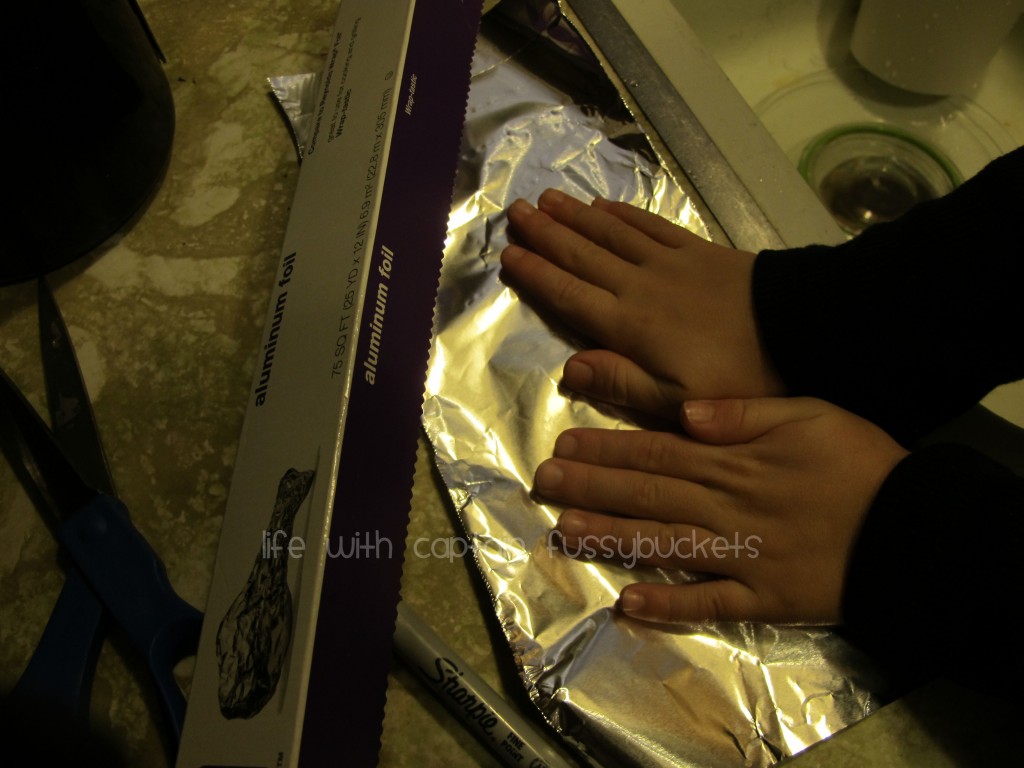 5. I cut D's to sort of curve on top.  Yes, it looks like a tulip.  The Captain didn't like that and wanted to leave it the way it was: 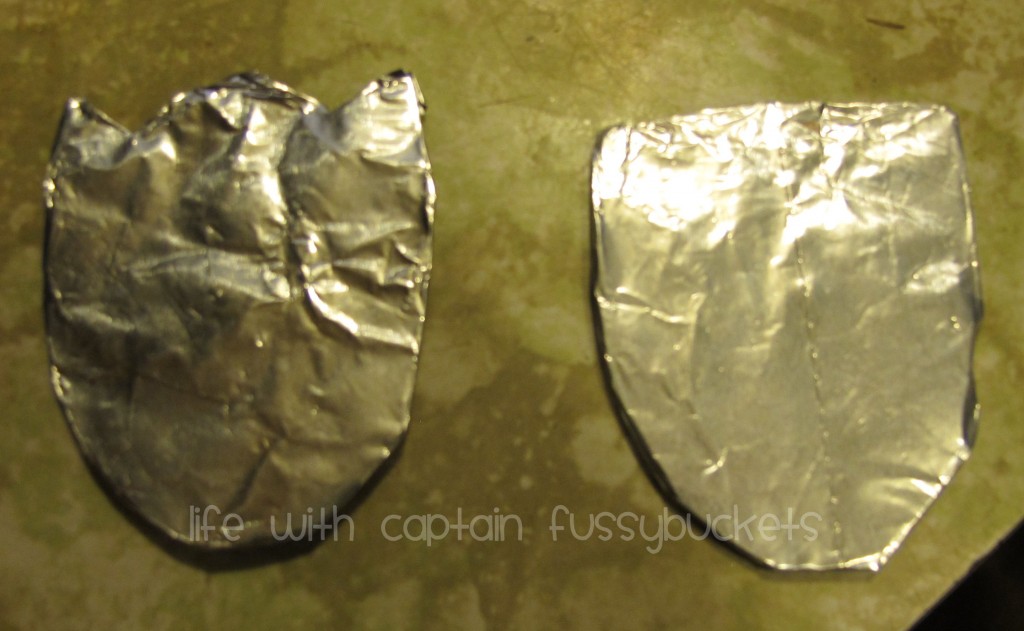 6.  Next up, decorate.  The Captain wanted an eagle on his and instead of figuring out how in the world I'm going to draw an eagle, I let him practice his drawing skills: 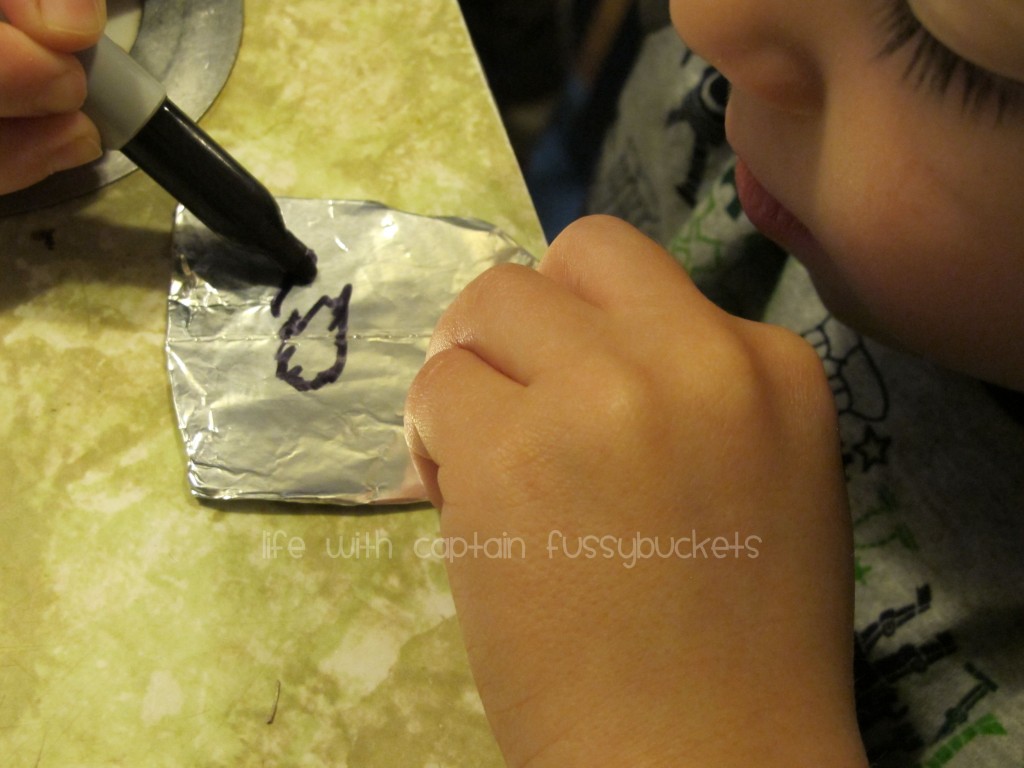 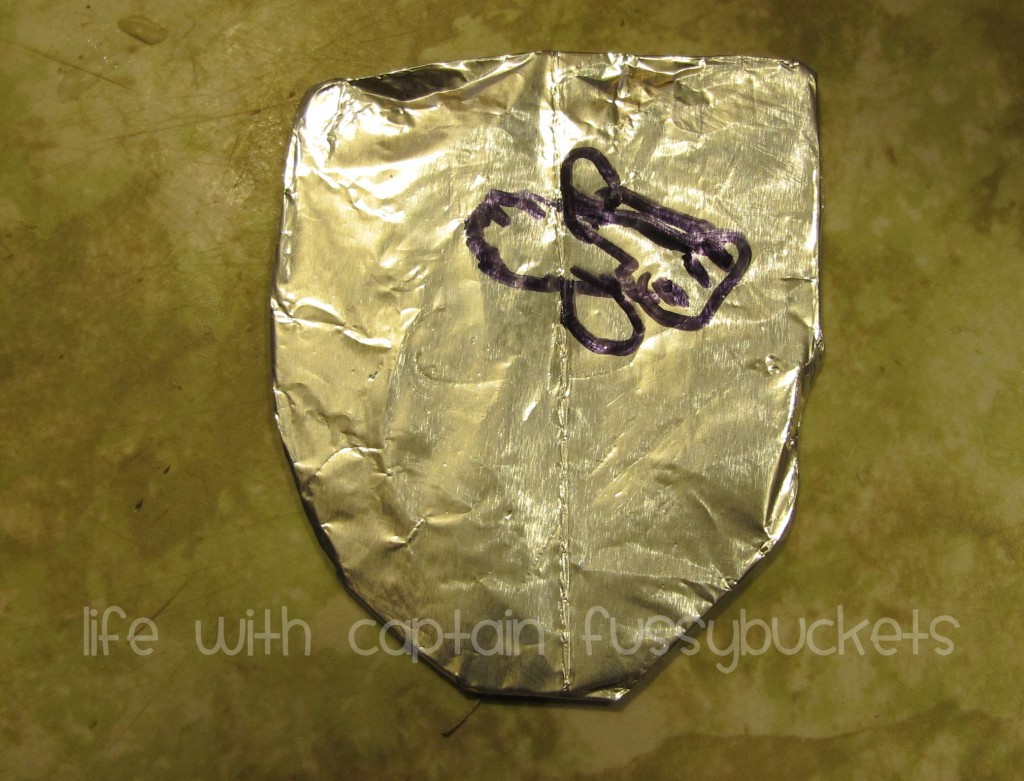 Time out.  It really bothers me when "kid" crafts I see on Pinterest are *SO* perfect.  Like….I honestly see some that claim their 3 year old made them and it's obviously not true.  It's OKAY for crafts to look like crap. (sorry I said the "c" word, Mom!)  They don't have to be perfect and they don't have to be framed and chances are, you can throw them in the trash in a week anyway!  So stop trying to make them perfect and let the kid do it!  Honestly.  I know a few kids off the top of my head who are OCD about their work because *someone* implied to them that their work wasn't *perfect.*  Stop it!  Okay, rant over…let's continue…

8.  With that said…D wanted nothing to do with drawing on his, so I just drew this for him.  (ironic after what I just said, I know, but he's 2!) 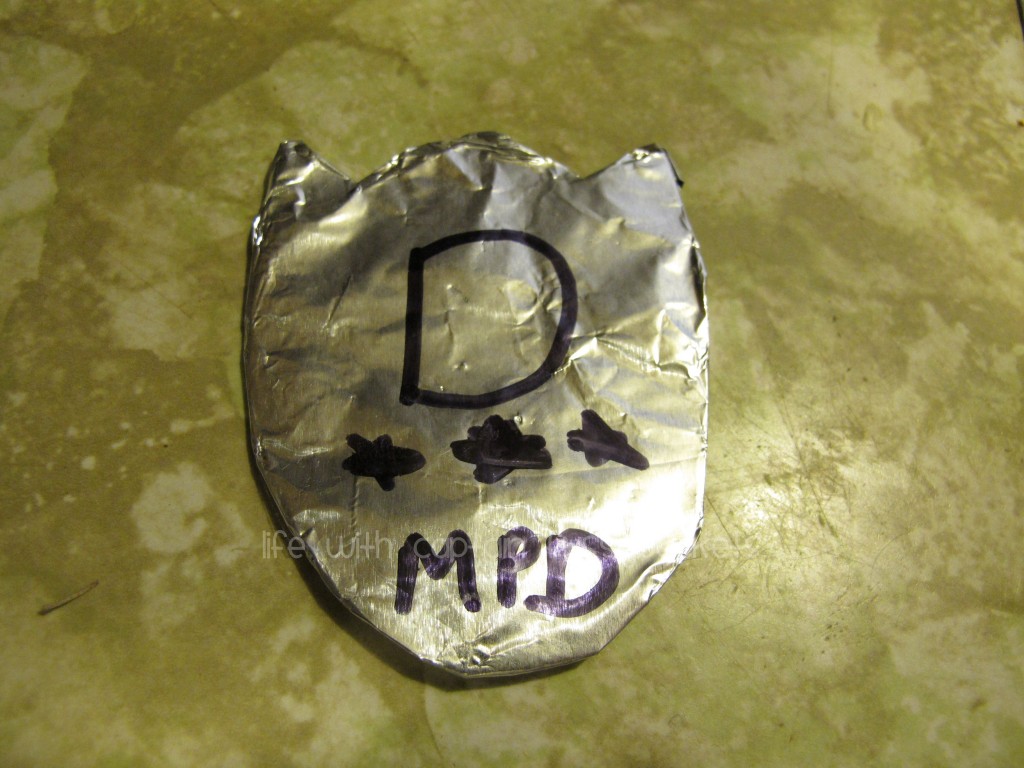 9.  Hot glue safety pin on the back.  This part is obviously only for parents: 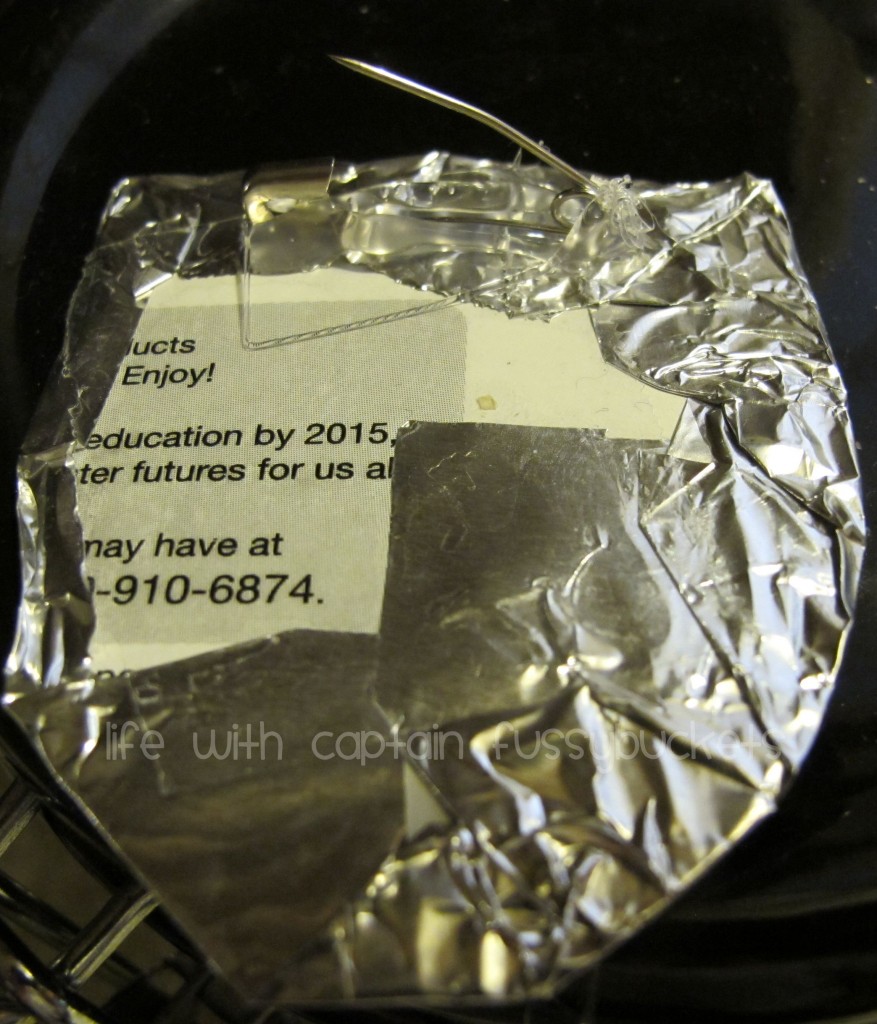 10.  Baby D was BEYOND proud of his new badge.  You would've thought I just sewed him a new costume!

11.  And the Captain was beyond thrilled with his badge as well.  This is him being a stern policeman: 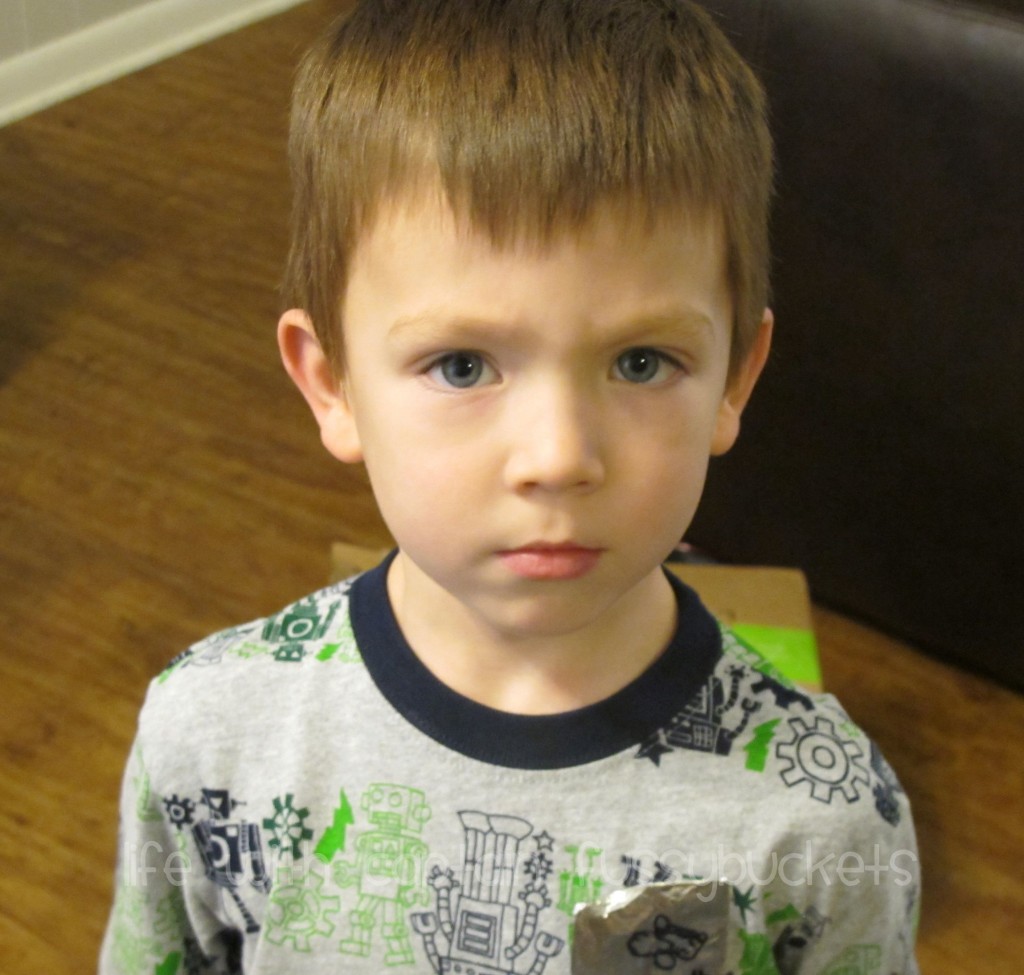 After this picture was taken, however, he went to his room and got out a blue outfit to wear.  Then he wanted to make a police hat out of cardboard.  Seriously, he is the mouse from "If You Give A Mouse A Cookie."  I should've named this post "If You Give the Captain a Homemade Police Badge…"  But, it's cute, and he's four, and he has an active imagination.  I let him try to make his police hat and it was cute how his little mind was racing, trying to figure out what he could use to make it.

A few notes about our project….Sharpie rubs off of foil eventually so maybe next time we should use something else OR just keep rewriting over it.  Also, the hot glue doesn't hold forever, either, but it's not bad.  If your kid wears it all day, you'll just have to reapply hot glue at night.

This is super cute! My son would love his own police badge. I love that it's made from things I already have at home, too - no trip to the craft store!

How sweet is this! I can even do this craft. ;)

So easy, yet I bet it would make tons of kids happy! My boys would enjoy making these.

Yes!  Amazing what a little foil can do to make someone feel special!!  ;)

What a great idea!I totally love this!  Do you have a pin button?

I love that book: If you give a mouse a cookie :) At least he is loving the awesome attention you are giving him.

me, too!  He feels pretty special with his badge!