The other day, we participated in the Bountiful Baskets food co-op for the first time, and were delighted what we had in our box!  Delicious strawberries, blueberries, kiwis, apples, a pineapple, zucchini, tomatoes, a yellow bell pepper, broccoli, lettuce, and……green chard.  Huh?  Green what?  What was I supposed to do with this?  I read that it was kind of like spinach, which I like.  I found a recipe for cooking green chard  (well, it was called Swiss chard in the recipe…I’m still unclear about all of these different kinds of chard when I didn’t even know one kind ever existed…)  Anyway, you can find the recipe here -> Swiss Chard recipe.

So here’s how my first experience with green chard went: 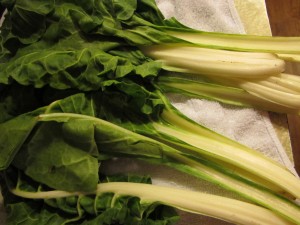 Step one:  Wash the chard and cut the tough ends off.  The recipe said 1/3 of the stalk, but if I did it over, I would chop the whole stalk off because I don’t like stalk.  Just like I don’t like broccoli stalk. 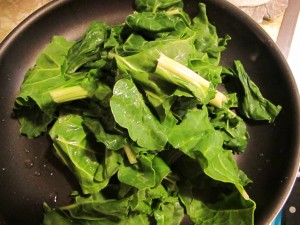 Step two:  Put some olive oil and garlic in a pan.  (The recipe said to add some dried crushed red pepper, but I didn’t have any.)  Add the chard. 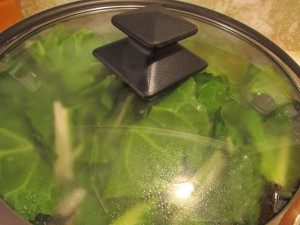 Step three:  Saute’ chard and cover for about five-ten minutes.

Step four:  Turn over leaves and cook for another five minutes. 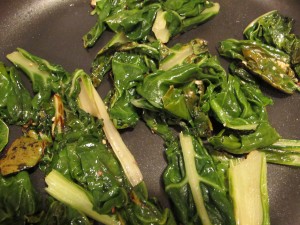 You see I burnt a few leaves, but they were still tasty.  My hubby said it tasted like spinach, and all he wanted was one bite because he’s not a spinach fan.  Baby D liked to play with it, but wouldn’t take a bite.  The Captain would even look at the stuff, hardly, let alone put it anywhere near his mouth.  So I was left to eat it all, but I didn’t eat it all.  I ate all that I could.  It wasn’t BAD, but it definitely wasn’t something I’d request again.  It had sort of a buttery taste, and the garlic really complimented it.

One of our friends said we could use it in a salad like spinach.  I think that if we do get chard in our box again, that’ll be the way to go.

Thanks for reading about my experiment in chard!

I love chard and kale now, but it took a while. I eat it for breakfast with protien from the night before dinner, or with an egg.  For me, it can only be lightly sautéed so it is just warm fresh not limp. And olive oil, garlic and a pinch of sea salt are my best friend .  What I do love about this for my breakfast is how wonderful it is for me, and how filling it is.  Glad you are having fun now with your co-op!