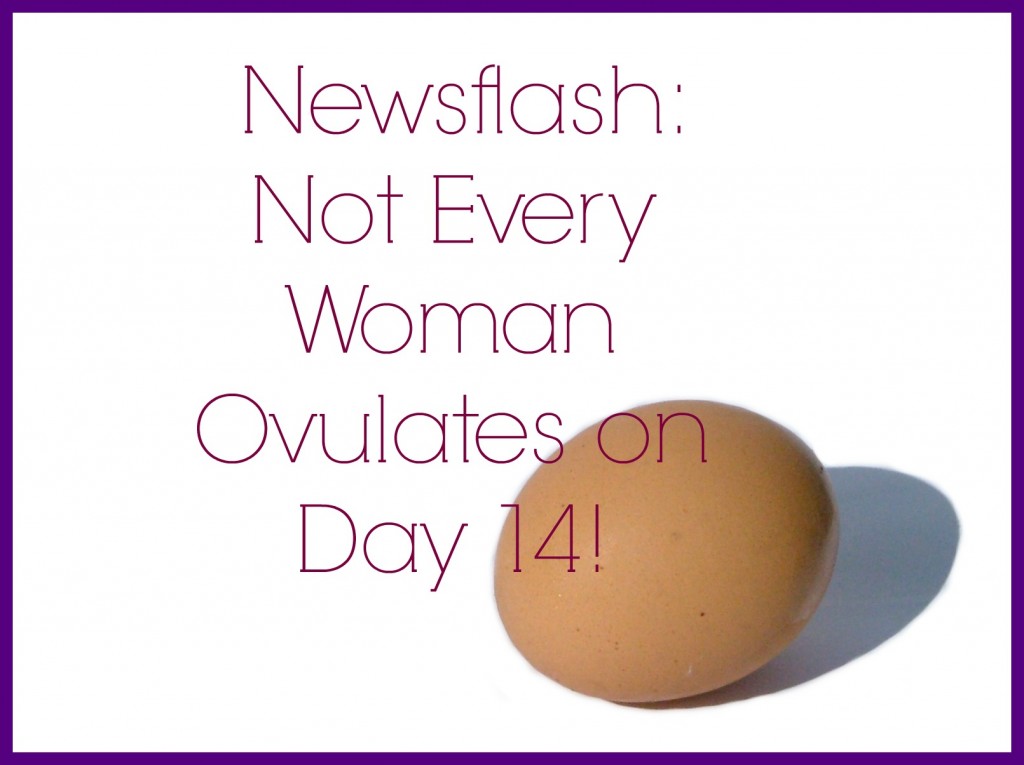 This may be too much information for some readers, but something has been bothering me for a long time.  Why is it that medical professionals and informative websites that claim to help women conceive a child miss out on vital information?  For instance, the OB/GYN on "The Doctors" said in a show a year or two ago that if you want to conceive, you should try on the three days prior to Day 14 of your cycle and one or two days after.  That was it….nothing about how some women ovulate early, some ovulate late…..just Day 14 is your lucky day.  And I've read this same information time and time again and it's JUST NOT VALID.  Sure, *most* women might ovulate on Day 14, but where does that leave the rest of us?  Thinking something is seriously wrong with us, spending tons of money on ovulation prediction kits every month, and scrambling for medical help.

When trying to get pregnant with our first, I began temping using a basal thermometer, just to see where I was and what my body was doing, and I'm so glad I made that decision.  Obsessive, maybe, but it led me to realize that my body did not like following the norm.  My cycles were all over the place.  After about 6 months of trying, I had cycles where I ovulated on Day 25 and then, at the time, it was about Day 60 with no signs of ovulation.  Trying to conceive is stressful enough, but I can only assume that those with 28 day cycles don't have to be as patient because they're only waiting 2 weeks to ovulate and then 2 weeks to find out if theyr'e pregnant or not.  Still stressful, still annoying, but, well, you know what I mean.

So, at the time, I thought I had only one choice.  Clomid.  If you don't know, Clomid is a drug that basically kicks your ovaries into high gear and makes them ovulate earlier and stronger so the egg is of good quality and your chances of conceiving are better.  There are a lot of horrible side effects, but I was prepared for them.  But, my first doctor thought I had no clue what I was talking about, thought that my long cycle with no ovulation was just a fluke, and treated me like an idiot.  So, I moved on.  Thankfully, a nurse practitioner and infertility nurse DID listen to me and did know that I knew my body well and so we proceeded with Clomid, under a doctor's supervision.  My body hated the Clomid.  My ovaries felt they were on fire, I was bloated, but the Clomid worked and on Day 19, I ovulated.  Yes, still no Day 14 ovulation like *everyone* was saying would happen.  *eyeroll*

Captain Fussybuckets was conceived and I was thankful.  I knew that I needed help with my ovaries and I am so, so, SO thankful someone listened to me and we went ahead with the Clomid.

Fast forward to Baby #2.  Four months of trying to get pregnant and nothing.  I was temping and charting again and my cycles were getting longer and longer.  I consulted a doctor, but he had me wait one more cycle, and that was it.  Thaty cycle, I ovulated on Day 30 on my own and we were lucky enough to get pregnant.  All was well.  No Clomid needed, Baby D came safe and sound.

Fast forward to Baby #3.  Same story, different child.  But this time, we were trying to be more natural with our lives and I wasn't sure if I wanted to use a synthetic drug like Clomid, even if I really needed it.  I began researching online and actually, was researching "short luteal phase" because by temping, I noticed that the days between ovulation and the beginning of my next cycle were less than 10 days, when it's supposed to be closer to 14, thus indicating what they call a "luteal phase defect."  I read on a few different sites that a natural treatment for short luteal phase was a dose of 50-100mg of B6 a day, plus raspberry leaf tea.  Easy enough.  I ordered a whole box of tea and drank it daily, along with taking my B6.  (keep in mind that if you're taking another prenatal or multivitamin supplement, you don't want to exceed 100 mg of B6 a day.)

Well, wouldn't you know….I ovulated on Day 17.  After a few months of Day 45, 55…etc…Day 17 really did happen.  And wouldn't you know again, I found out I was pregnant 10 days later!  I was in shock.  I was feeling so overwhelmed with joy and fasination that something so simple really worked.  Was it a coincidence?  Definitely not.  My body had never ovulated that early.  Will it work for everyone?  Oh, for sure it wouldn't.  But it did for me.

So, my suggestion to women who are trying to get pregnant, listen to your body.  Get a basal thermometer and start charting with sites like Fertility Friend, research natural solutions to whatever your issue is, THEN talk to a doctor if you're still having trouble.  And if that doctor thinks you're crazy, move on to the next one.  And the next one.  You deserve great treatment and care.  And if you need synthetic drugs or surgery or extra intervention, that is perfectly fine, that's what they're there for.  Best of luck to you if you are trying, because no matter what the issue is, it is stressful.

sidenote:  This Day 14 confusion also enfuriates me because of the whole "over my due date" thing. Doctors usually give one due date, based on last menstrual period, assuming you ovulated on Day 14.  It's standard, but don't freak out if you go "over your due date" because few people know when they actually conceived.  Over and out!

*Any medical information not intended to diagnose or treat any condition.  As always, check with your doctor before taking anything.  Contains affiliate links*

I love this post I am currently 14 weeks pregnant thanks to my second round of clomid! I also did not ovulate on day 14 more like days 16-20 of a 35 day cycle!

Very interesting! With my first, we got pregnant right away. My second took us six months, and then with my third it was right away, after getting my MP back. Now that we're trying for our fourth, it's taking us awhile. I'm still breastfeeding however, and have been blaming it on that...since my MP's are not very consistant. I think I'll try the tea and vitamin thing and see if it helps.

I hope it works for you or at least you don't have to try very long!

I just use cervical mucus to tell (because BBT won't tell you when you are going to ovulate..just AFTER) but I like you do not ovulate on day 14. I'm one week late and even though it hasn't hindered gettting pregnant, I do have to make sure to adjust things so that my due dates are correct. Otherwise I seem to be one more week past due than I actually am.

Yes, CM is very important!  I chose to leave that tidbit out because some can't stomach it...lol...but it's a crucial part, too.

I argued with my BFF about this because she kept telling me she was using an "app" to track her anticipated ovulation, soley by LMP. I finally convinced her to buy an ovulation kit and guess what, her timing was completely off! Needless to say she's deleted the app. :)

haha!  You're a good friend!

Very important to listen to your body.  We know it best!