Around the middle of May, I began to get concerned about the boys' behavior.  I was looking at a summer with all three kids after the Captain ended his year in half day pre-k.  He is 5 1/2 and definitely acting like a 5 year old boy who has been surrounded by other 5 year old boys for months!  Thankfully no bad words have come up, but the potty talk and laughing incessantly at "poop" and other words were common, and he was teaching D, who is 3 1/2, just how hilarious they are.  There was also the disobeying, defiance, and being mean to each other that was driving me crazy.  Something had to be done.

Daddy is gone a lot during the summer because he is a youth minister.  Camps, trips, and other work engagements keep him busy and so I knew I had to do something to stop the negative behavior and get us all working together so we could have a great summer.  I began to think of what I should do…and then I remembered something that works brilliantly with all kids:  rewarding positive behavior.

When I was a teacher, I tried many things – treats, treasure box, encouraging words, and more.  But the one thing that got the best response from my class was when I gave them a sticker for any outstanding positive behaviors.  Soon, the whole class was trying to earn a sticker with their positive behavior that, while the negative behaviors didn't go away completely, they definitely decreased!  I saw this same phenomenon a couple of years ago when the Captain brought home a "Shine God's Light" sticker chart from VBS.  He was supposed to earn stickers by doing positive things for others, like praying for them, giving them something nice, or just doing something thoughtful for another person.  He was so excited about this chart, but for a (then) 3 year old, there were a LOT of spaces to fill.  You can't tell from this picture, but this was about half full: 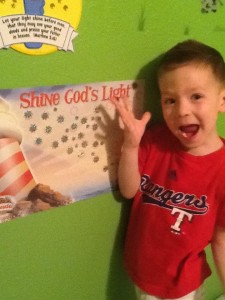 It took him about two years to fill up this chart, but when he did, we rewarded him with something he wanted:  a new basketball.  He didn't know he was working towards a basketball, but when the chart was full, he happened to want a basketball, so that's what we gave to him for his positive behavior.  I always prefer to get the kids something as a reward, not "just because," so I go that route whenever possible.  $15 for something he wanted, to reward him for two years of doing great things.  Pretty good deal, if you ask me!

So back to our current situation.  We needed to do something!  I was pretty much done with sticker charts, but I remembered that we had some aquarium stones and of course, lots of different sized jars!  I worked with the boys to make up a list of ways they could earn stones and informed them that they would be working TOGETHER to accomplish one goal.  Here are the four ways we came up with to "Shine God's Light" and earn a stone for the jar: 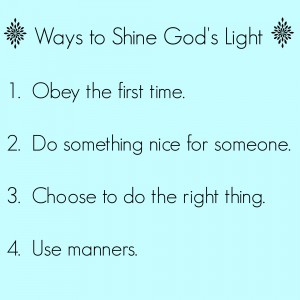 They had to come up with what they wanted to work towards together, and when the jar was full, they would both get to enjoy the reward.  This has helped with the competitiveness and while it is sometimes hard to agree on something they both want, they really do work together!  The first goal they wanted to work for was to get the "Frozen" DVD.  Once I handed out the first stone, they were on a roll.  Their behavior really changed almost instantaneously.  Now, of course, they're still humans and we all make mistakes.  I just focused on correcting their negative behaviors but really rewarding their positive behaviors.  The boys were telling each other to "please move" and "thank you!"  They were obeying the first time (this one is the hardest and will continue to be the hardest because no one really likes to stop what we are doing and do something someone asks of us.)  It took about three weeks for the boys to fill the jar and when they did, we went out and bought the "Frozen" DVD the same day. 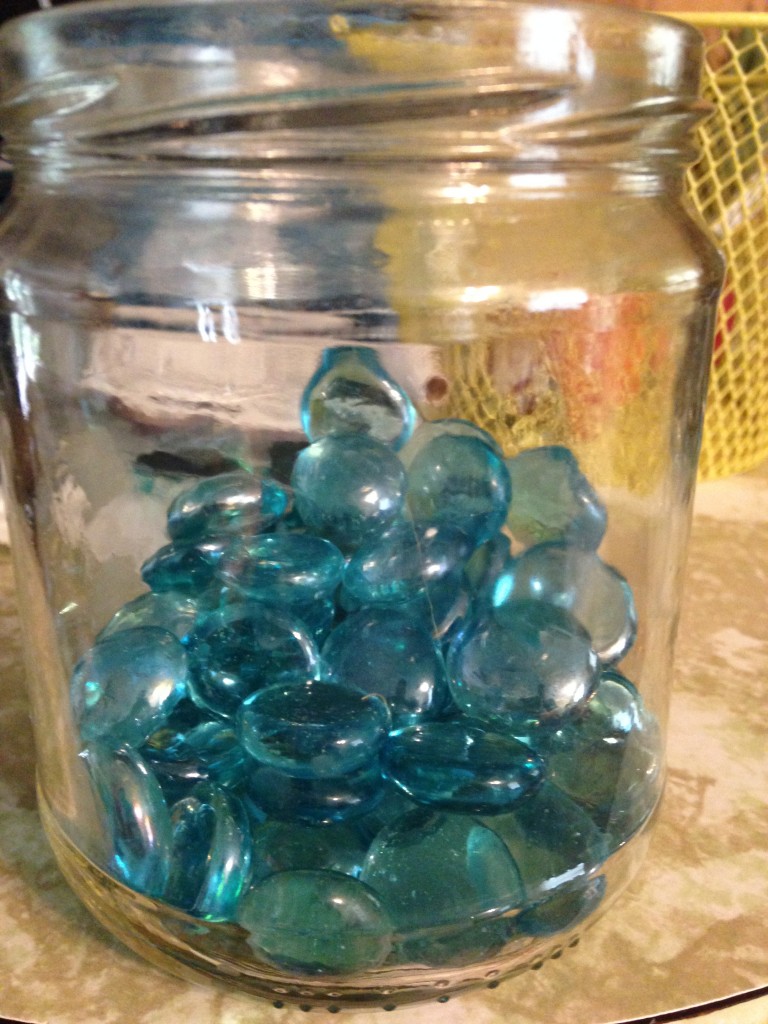 When that goal was met, the boys talked together about what they wanted to do next.  Another movie?  no.  A toy?  no.  They had been asking to do something special as a family, particularly asking to go to iT'Z, which is like a nicer, more pleasant experience than Chuck E. Cheese's and has a rock climbing wall, bowling, and more.  I'm not a huge fan of either place, but hey, if they want to work for a trip to go there, I'll be happy to reward their positive behavior.  So, I told them that the little short jar wouldn't really work because a trip to iT'Z is more expensive than a DVD.  I took a taller jar out of the cabinet and showed them and they agreed that they could work towards filling up that jar and earn the trip they had been wanting.

(This also is a great way to delay an allowance in our house.  The Captain, especially, gets money and it burns a hole in his pocket.  He will waste it on anything and everything he sees if he doesn't have some guidance.  The stones in the jar have some "value" to them, but they're not monetary.  They can see that the jar for the DVD was shorter than the jar for the trip to iT'Z, so they can grasp the concept that some things cost more than others, but there is no handing out money.  There is no "you do this chore, I pay you $$."  An allowance will come in the future, but for now, this is a great intro to an allowance.  It's a reward for good behavior, not payment for a task.

This was our "Shine God's Light" jar a few days ago: 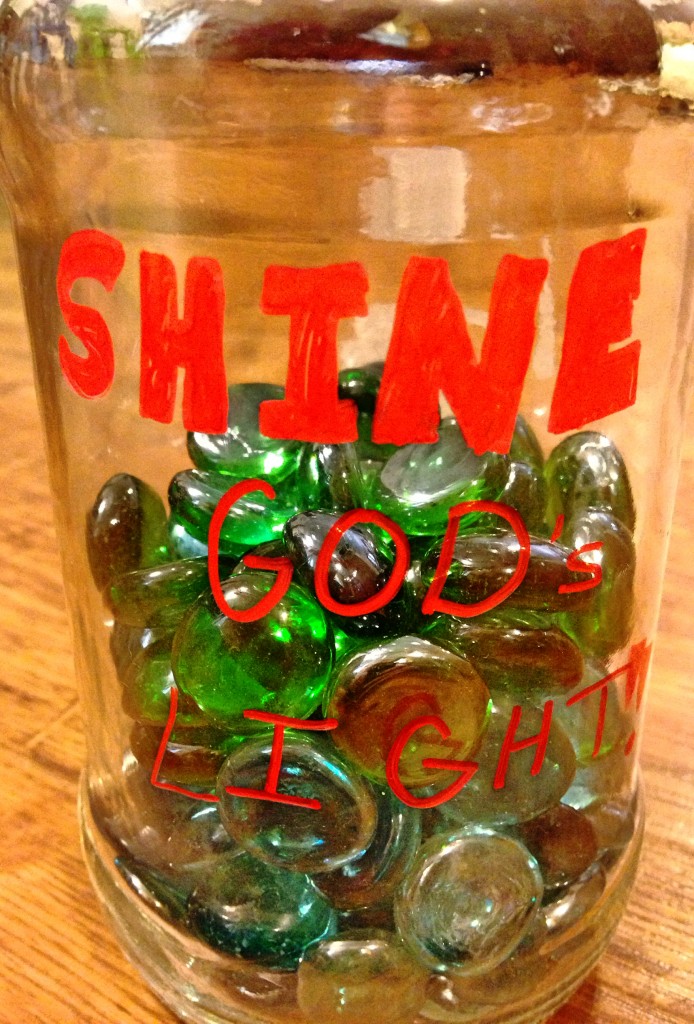 Rewarding positive behaviors definitely takes effort on my part, and it's not fail proof, for sure.  They still act up and are still naughty at times, but their behavior is light years better than it was just two months ago.

Rules for earning a stone:

2.  You can't get a stone for yourself.  Our cup of stones sits on top of the fridge so they aren't tempted.  (This is when the noise of a stone in a glass jars comes in handy….Mommy hears all!)

3.  You can suggest that your brother gets a stone if you see him doing something good.

4.  We can't take stones out.  I have been guilty of threatening them with this on bad days, but it's just not a good idea.  They earned them and they shouldn't be taken out.  Discipline and rewards for positive behavior should be two separate things.

5.  Stones aren't used for bribes or making deals.  No "clean your room and I'll give you a stone!"  Nope, it's "Wow!  You cleaned your room the first time I asked without complaining, thank you, you get a stone!"  Likewise, they can't say "Hey Mom, I'll pick up my toys if you give me a stone."  Scheming doesn't work for stones!

6.  All stones are of equal value.  Share a bite of your cookie with your brother?  One stone.  Spend an hour working with Mommy in the garden to keep her company?  One stone.  Get a diaper for Mommy because you knew she needed help, even though she didn't ask?  One stone.  Simple!

Some people will argue with this whole idea and say that kids should do what parents tell them "just because."  I've heard people say that kids should mind their parents all of the time and if they don't, they (get a spanking, get time out, etc.)  I DO believe that negative behaviors need consequences, but I'm telling you….kids aren't born with the ability to obey and need to be taught.  I prefer to teach them in a positive way because it gets better results.  Sure we discipline when needed, but for us, an appropriate mix of the two works really well.

This is a great way to help the kids learn about how others feel.  The boys have both gotten stones for helping other people and not even doing it just to get a stone.  Once they got used to helping others, it becomes more natural.

If you want to go beyond showing your kids how to "Shine God's Light," and teach your kids about God's love, check out "Simple Ways to Bring Jesus into Your Child's Daily Routine."

How to Motivate Kids - onecreativemommy.com

What a wonderful way to encourage good behaviorI would love to have you hop over and share with us at Inspire Us Tuesday (http://twolittlecavaliers.com/2014/09/inspire-us-tuesdays-lets-go-glamping.html)

What a wonderful (and thoughtful) idea!  I'm going to adopt this technique at home starting tomorrow!  I especially love the "no taking away a stone" idea.  You're right, they earned those stones.