We bought Captain Fussybuckets his first bike at a garage sale last Fall.  It came with training wheels, but no helmet.  We knew the importance of wearing a helmet when cycling, even if the training wheels were still on.  It's important to get into that habit, for sure.  So, Grandma bought the Captain a helmet for either his birthday or Christmas of last year, I don't really recall.  But, he's been wearing the helmet each and every time he rides his bike outside, and most of the time when he rides his bike inside.  (Yes, I let my child ride his bike inside!  We have a big room for the youth group and the couches are pushed to the wall and it's the perfect place for the boys to ride their bikes, cars, Plasmacar, etc.) 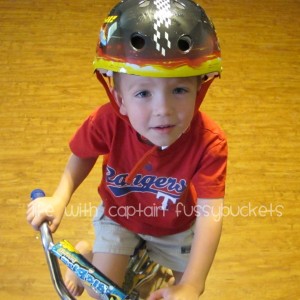 Well, on Monday, we decided to take advantage of the cooler morning temperature and take a family walk to the park.  The Captain rode his bike and wore his helmet, Daddy pushed Baby D, and I walked alongside of them.  On our way back from the park, we stopped at a stop sign and the Captain was getting a little hot, so he took off his helmet.  We were almost home, so he asked if he could ride with it off.  Daddy quickly told him no, that he had to leave it on to be safe, and without a fuss, he put it back on.  Thank goodness, because about one minute later, he took off as fast as he could, lost control of the bike, and flew forward, falling with the bike.  (Yes, you can still fall using training wheels!)  Daddy ran to pick him up and he was crying and complaing about his finger and thumb hurting, which we looked at them at they were a little scraped.  Then he grabbed his head and we took off his helmet and saw this: 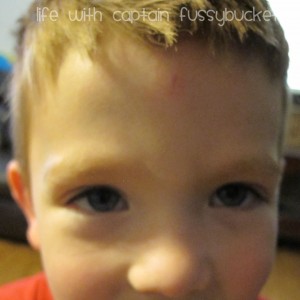 Yes, that tiny little mark on his forehead.  It looked better when I took this picture, but it was just a tiny little scrape from where the velcro UNDER the lining of the helmet scratched him.  The Captain had fallen ON his head when he fell off his bike and the helmet saved his face from a huge scrape and probably saved us a trip to the ER and/or a concussion.  He was riding pretty fast when he lost control.

It doesn't look like much, but his helmet is beat up.  This definitely taught us a lesson because you know if the helmet looks this bad, his face would have looked a lot worse: 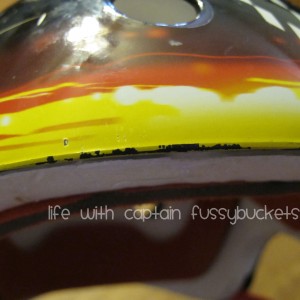 Helmets are important, even if you're three and using training wheels!!

I agree with you completely.  Thanks for the reminder I don't want to be careless

I'll definitely buy my son a helmet once he starts riding bikes! I always want to be on the safe side!

It's definitely so important to make sure you wear a helmet!

Great Reminder! So glad he was wearing a helmet. I tweeted this post and hopefully it will remind people to be extra careful and take the necessary precautions. Thank you for sharing.