Disclosure: I am part of the PTPA Brand Ambassador Program with Restonic and I received compensation as part of my affiliation with this group. The opinions on this blog are my own. #GoToBed  Six tips to help parents get more sleep

I frequently joke that I haven't gotten a full night's sleep for about 7 years now.  I used to be able to sleep through the night, but then around the second trimester with the Captain, I had to wake up multiple times a night.  I either had to use the restroom, or my hips or back were hurting.  Then, of course, he was born and my sleep was interrupted by a crying baby….often.  He did not sleep through the night until he was about 18 months old, and even then, it was not every night.  Through three pregnancies, three newborns, multiple moves, sicknesses, and more, I can honestly count on one hand the nights I have slept 6 consecutive hours.  Baby Brother, at 16 months old, is working on sleeping all night long, and does great sometimes, but other times, not so much.  I crave a 20 minute "siesta" after lunch on most days!

People do not realize how your sleep takes a drastic hit once you have kids.  Now, if you are one of the lucky ones who has a baby that sleeps through the night consistently, do know that you ARE lucky!  I have heard stories of parents with six year olds who still wake up in the night.

The Captain did not sleep through the night consistently until D moved in his room when the Captain was 4 1/2!  It seems he just needed to know someone was nearby and thankfully, his little brother sleeping in the same room helped.  Hallelujah!  But there have also been nights when everyone is sick and we are up multiple times a night.  When Baby Brother was a newborn, I made this meme to add humor to our situation because for awhile, this was all too true: 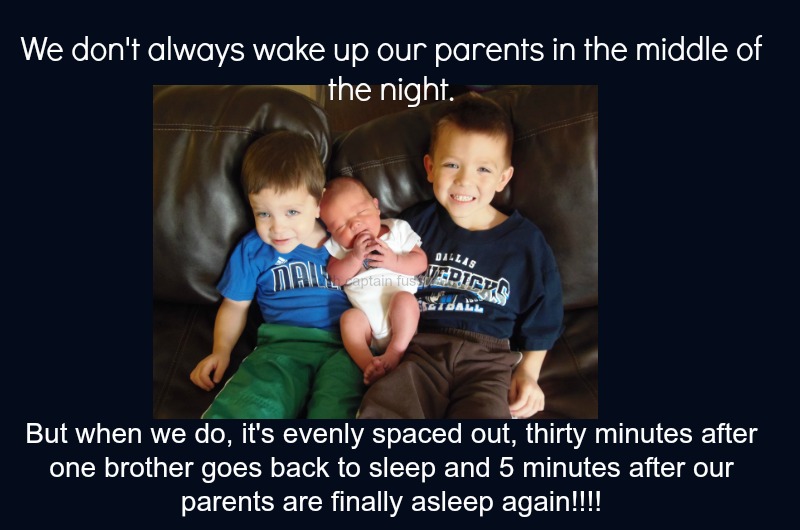 We are on the verge of it all being behind us (hopefully!) but it isn't quite funny yet.  Some kids just don't sleep well and unfortunately, 2/3 of our sons are like that.  That's okay…we have learned to make the most out of our son's sleep habits and are counting our blessings for our one good sleeper. 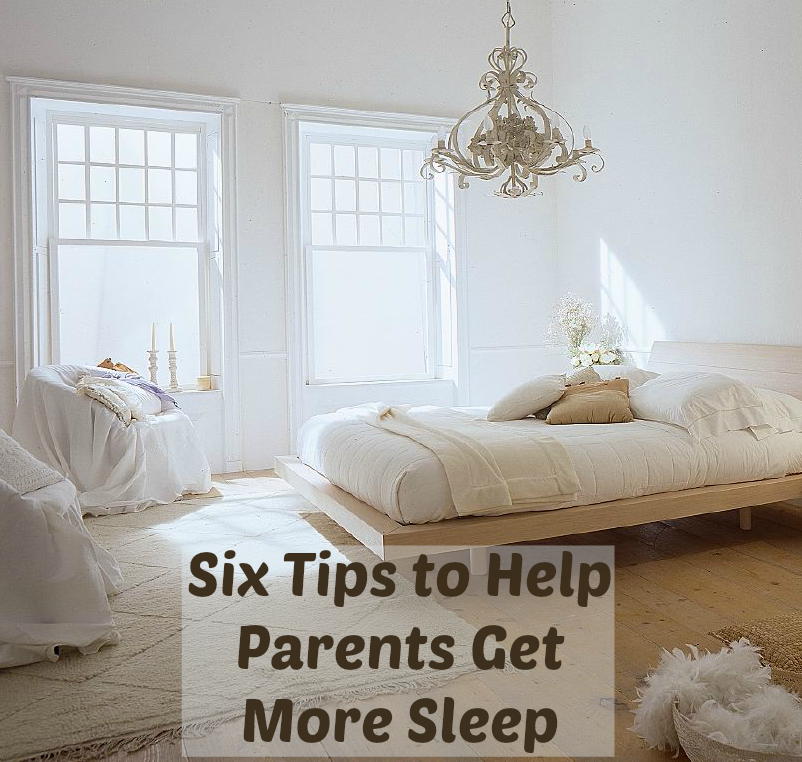 We have spent six and a half years thinking about, craving, and not getting enough sleep.  So, I consider myself a professional of parenting while not getting adequate sleep, and I have compiled a list of five tips to help every parent get more sleep, no matter what kind of sleeper you were blessed with!

1. Reevaluate bedtimes.  We found that no matter what, the Captain would wake up at 7:15 on the dot, most days.  We discovered that he was sleepy by 8 PM and so I started aiming for 8 for their bedtime.  This gives us more time to catch up on chores, veg out in front of the TV for a few minutes, spend time together, and finally, get to bed at a decent hour.  Every parent needs a little downtime, and bedtimes don't have to be super early or super late, just do what works best for your family's sleep needs.

2.  Don't be afraid to train kids to help themselves in the morning.  I know, I know, this might sound horrible, but there comes a time when kids are old enough to be independent.  We told the Captain that if he couldn't help waking up at 7:15, that he didn't have to wake us up until 8.  Call us lazy, but those extra 45 minutes are blissful, especially after the baby has been up during the night!  I sat down with the Captain, who is 6, and wrote out a list of things he could do in the morning.  He isn't allowed to watch or use a "screen" until 7:30, to allow his body to wake up naturally and so he doesn't think he can get up at 6 AM and watch TV.  He can pour himself a bowl of cereal, read books, color, etc.  Now, it took some training and a lot of worrying on my part.  I checked on him a lot during those first few mornings, and coached him through it.  He loves this special time when he is the only one awake and he knows what he cannot do.  I trust him to be safe and he likes the independence.  And on the days when D wakes up before we do, the Captain loves taking care of him and helping him with his cereal.

3.  Go to bed!  Set a timer for the time you want to be in bed.  Get everything you need to get done before that time and if you're not done, save it for tomorrow.  And, either leave your phone in the other room, or set another timer so that you will only spend 5 minutes on your phone and then turn it off (or silence it.)  Smart phones are a great convenience, but really do mess with sleep!  Go to sleep!

4.  Use a sound machine and put the baby monitor in the other room.  I leave the monitor in our bathroom, close the door, and I still hear him when he gets up.  I don't need to hear every single sleep noise, only when he needs me.  And the sound machine drowns out the annoying noises like birds in the morning, kid's sleep talking and noises, and more, but isn't so loud that it drowns out crying and yelling "Mommy!" when someone has a nightmare.

6.  Most importantly, don't take your sleep for granted.  It's simply not true that you can ever "catch up" on your sleep, so sleep when it's time and don't sacrifice your sleep for things that just don't matter and can wait until tomorrow.  Because you never know when the kids will be up sick or having a nightmare in the middle of the night!

Visit Restonic for more information about getting a good night's sleep!  And make sure to follow Restonic on Twitter and Facebook for the latest news.  And follow the #GoToBed hashtag on social media channels, as well.

How did you sleep last night? Wow, sounds like you've been through the ring of fire when it comes to parenting and sleep! But it also sounds like youv'e got a solid plan in place to sleep better. We're looking forward to reading your post next month - and maybe using a few of these ideas ourselves :-)

Black out blinds. Light and a baby do not mix well. When we blacked out our son's room, he slept that little bit longer in the morning when the light would normally start to creep in.