I remember sleepwalking a few times as a child.  One time I remember walking out of my bedroom with my small plastic trash can in one hand, and my blanket in another.  My oldest brother was sitting at the computer and he asked what I was doing, which I think woke me up.  In my haze, I replied "sometimes I just get mixed up" and I went back to bed.  Then another time, my mom was in the bathroom and I walked in and she says I used her face soap to wash my hands.  She asked if I needed to use the bathroom, but I didn't remember that at all.  She said I finished washing my hands and went back to sleep.  There were times when I woke up and all of my dolls were lined up by my bed and I had no recollection of doing it!  Sleepwalking is a very, very weird feeling.

I think I have sleepwalked/talked a few times as an adult, but not much.  My husband, however, is a very frequent sleepwalker/talker.  He has thrown a towel on the wall, insisting that there were spiders all over it, made a lot of noise on our wood floor and told me he was trying to fix the Captain's "wrench set" (which he doesn't even have??), and most commonly, thought he was at church camp or a lock-in and there were people waiting for him.  I always know, now, when he is sleep walking or talking, but in the beginning, it really freaked me out.  One of the first times he did it, I laughed and laughed at him and he got mad and said "I'm going to send your forehead straight to the station!"  Whatever that means, but I was scared.  ha!  Now I just stay quiet and let him do his thing or I just ask him what he's doing, which he almost always replies with something, even if it makes no sense.  I really feel bad for him because I know the confusion and weird feeling that comes with sleep-doing things!

Well, I have been worried that the Captain is a sleepwalker for a long time now.  He has been coming in to our bedroom for over a year now.  We set him up a kid couch for him to sleep on because nothing worked to keep him from doing it and I'm not about to put a lock on his door to keep him in his room.  Kids get scared in the night.  I did, my husband did, and it's okay.  He won't do it forever.

Last night I heard some thumping around in the house, soon after we had gone to bed.  I figured it was the Captain coming to our room early, so I just stayed there and watched the door.  Sure enough, a few minutes later, the door opened and he stumbled in.  But, he turned around and left.  I got up, thinking maybe he left his blanket in his room, but he walked into the living room.  I called for him and he came around the corner, running into the wall, pretty hard.  I got down on his level and looked at him and said "are you okay?"  His eyes were wide open but he didn't respond.  He just stumbled past me and fell on his bed.  I put his blanket on him and went back to bed.  About a minute later, however, he was screaming.  I went into his room, again, and he was just sobbing.  I asked him what was wrong and he said "I want Daddy!" Okay….so Daddy came in there and the Captain told him that he woke up and he was scared.

I know it's just a little thing that happens and most of the time, kids will grow out of it.  I looked at WebMD for possible solutions to our sleepwalking problem and here's what it said:

We know that the Captain doesn't get adequate sleep.  He has started going to "school" a couple of times a week and doesn't nap while he's there.  He's also always been not such a great sleeper, so I'm sure his quality of sleep isn't too great.  I don't think he's stressed, at least I hope not, but that probably explains Daddy's sleepwalking.  The last thing we all need to work on!  We try to wind everyone down at bedtime, but last night we were at church until close to bedtime, so the boys were a little nutso.

I guess all we can do now is make sure the Captain (and Daddy) are safe and don't hurt themselves while sleepwalking!

Do you have a sleepwalking story or advice?  I'd love to hear it! 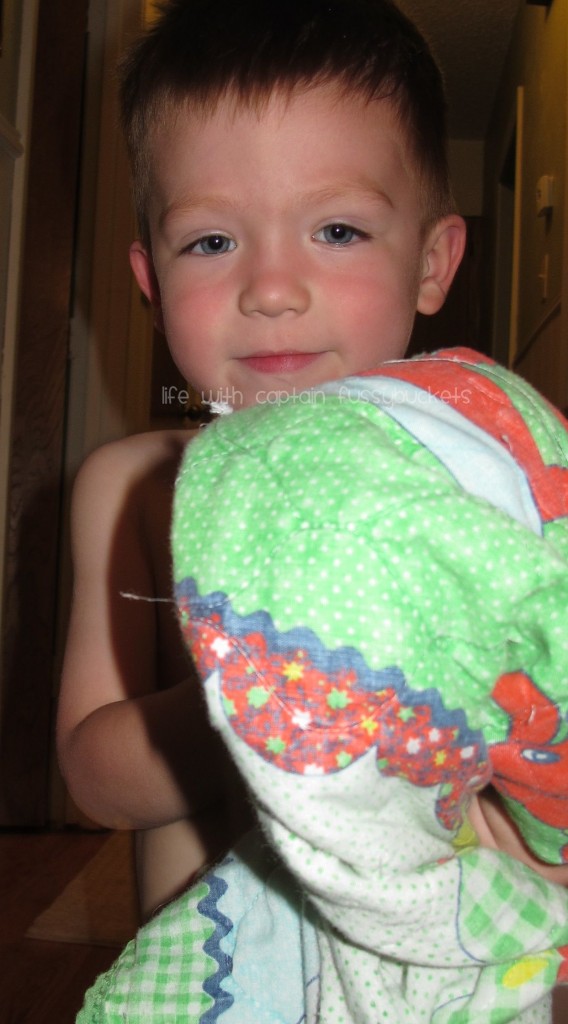 I've been known to talk while sleeping (haven't done it for a while though) but I don't know of anyone that sleepwalks. It does sound like it might be weird to wake up in the middle of the kitchen or somewhere else and not knowing how you got there.  Hope your boy's forehead is not hurting after running into the wall!

When I was kid, I woke up once with my nightshirt off.  Bizarre.  Now I'm way worse than I was as a kid.  I wake up my husband a lot saying I think I saw something on the wall or stuff like that.  He says I'm one of the scariest people to sleep with ever.  LOL   I hope the Captain can get some good sleep so he doesn't wake up scared like that again.  My 4 year old son has been waking up a lot crying since he started school.