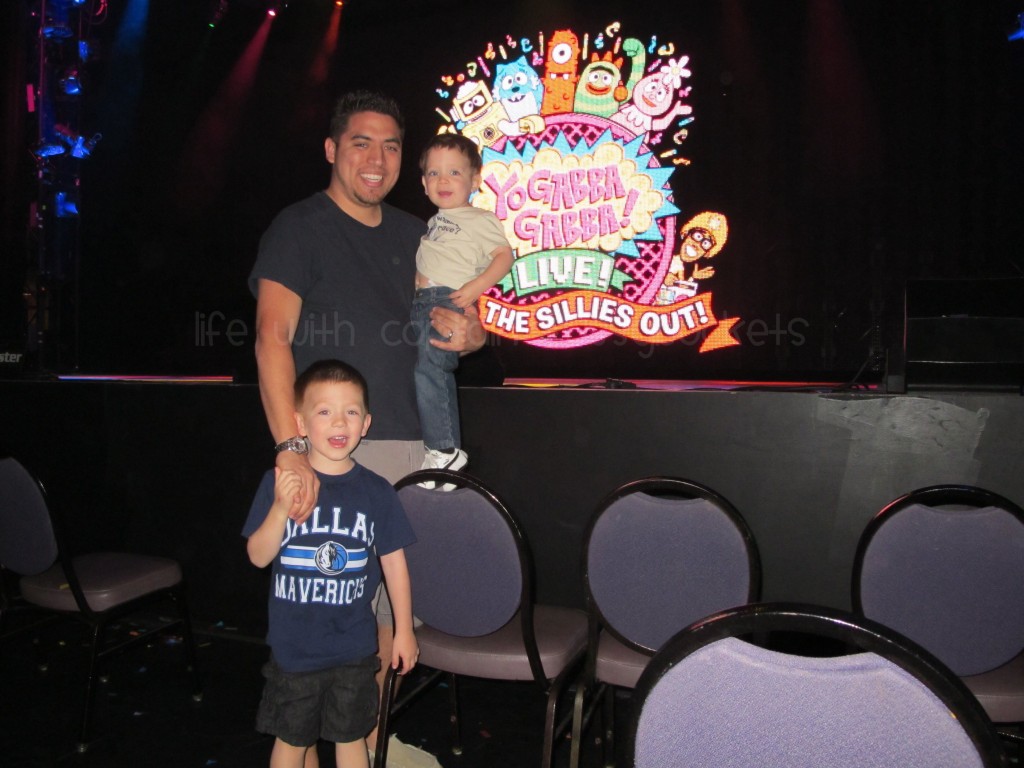 Captain Fussybuckets is four and Baby D is two, so they are both right at the prime ages for loving "Yo Gabba Gabba."  They were beyond thrilled when they found out that we were going to see them LIVE!  We saw a different Yo Gabba Gabba! Live! show in 2011, so we KNEW it was going to be great for the kids AND us!  We loaded up the car and headed for the show at Dallas Fair Park Music Hall for the 6 pm show.  We arrived about 45 minutes early and found fun games, led by Yo Gabba Gabba volunteers.  The boys played this fun beanbag toss game: 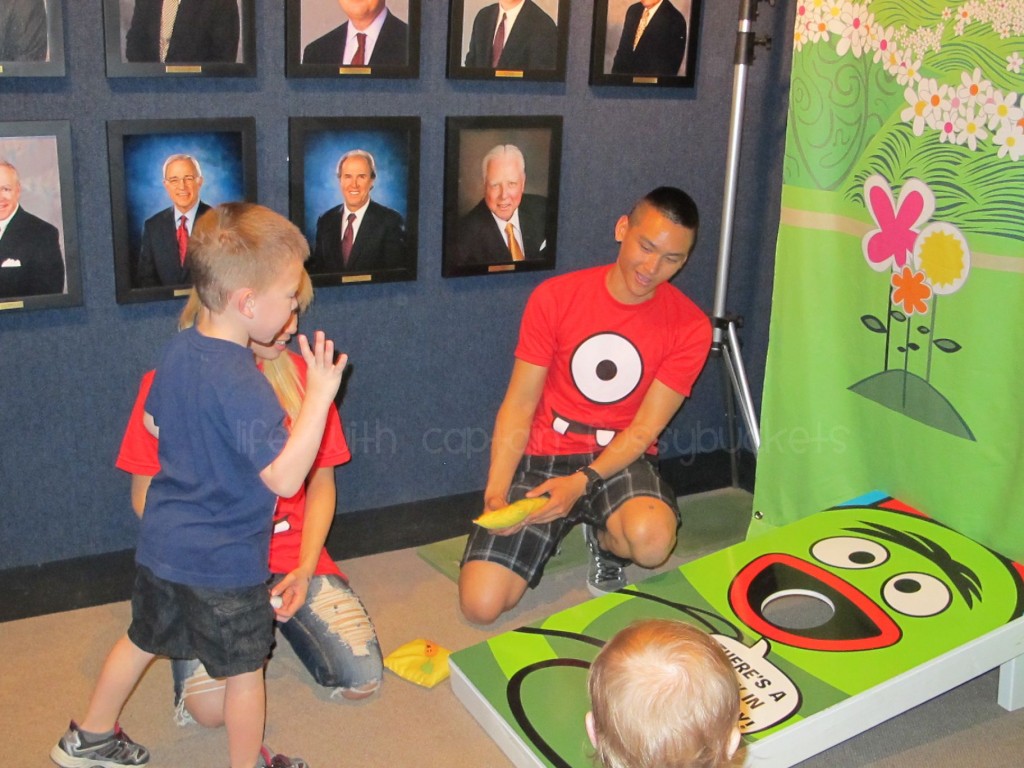 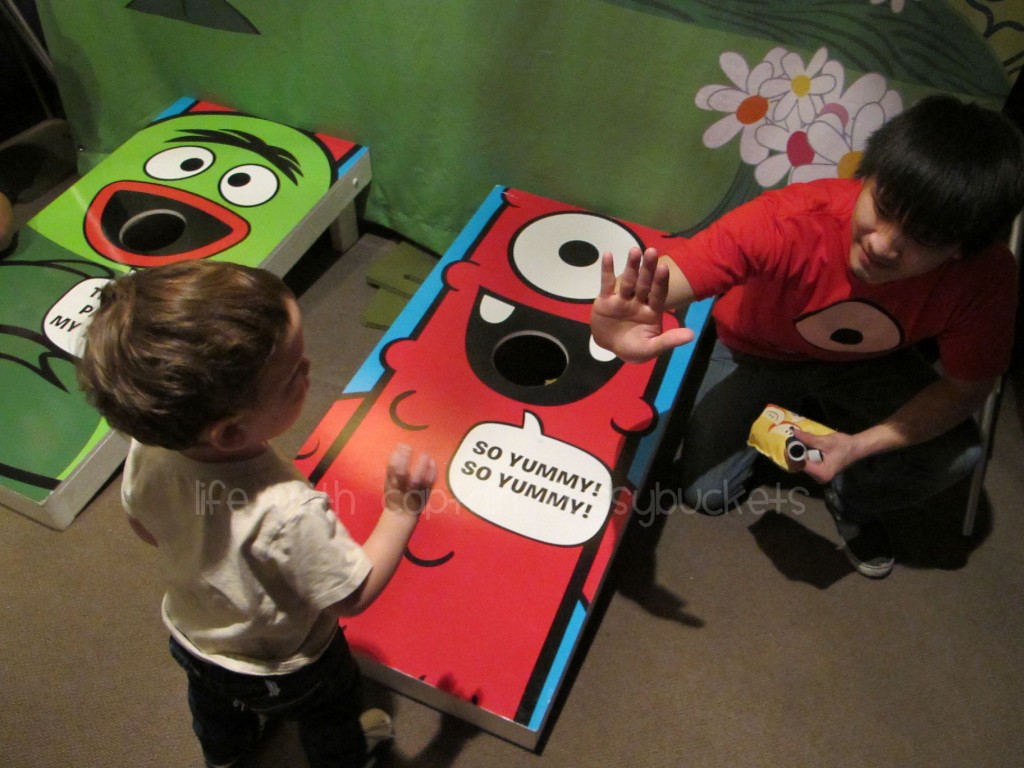 And then we found a place to play instruments! 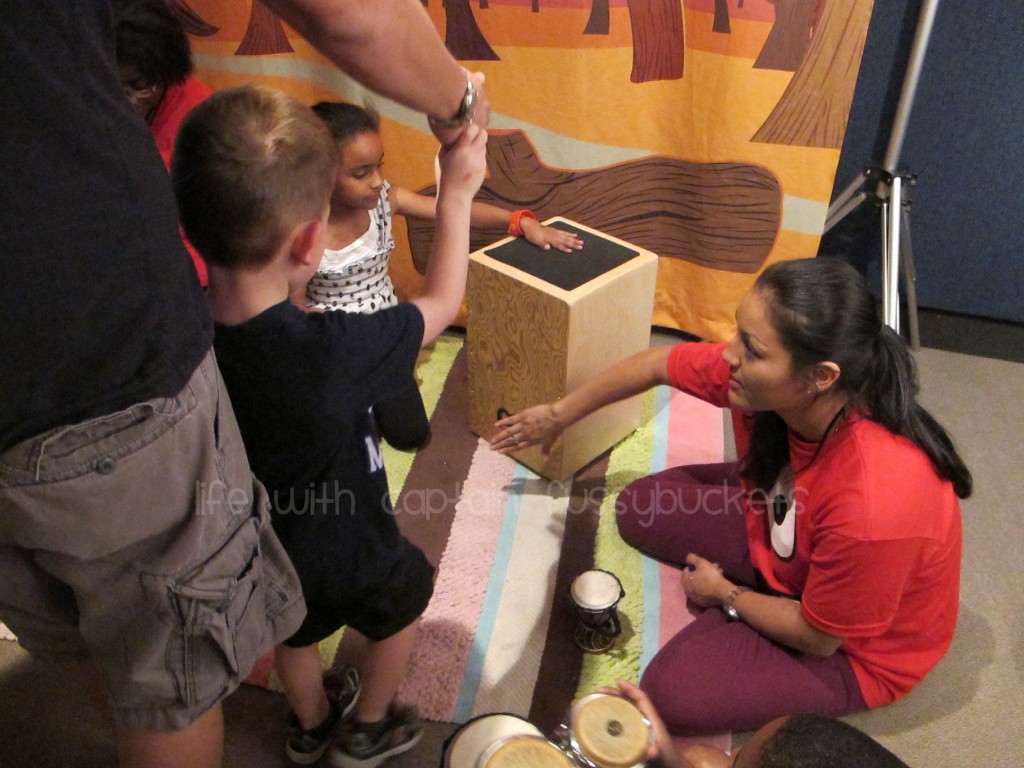 Then we went inside to find our seats and wait for the show to start.  We were so excited that our tickets were in the third row, in the pit.  We had a great view of the show, which started shortly after we sat down.  We were so blessed to get to sit so close to DJ Lance Rock & the gang singing and dancing! 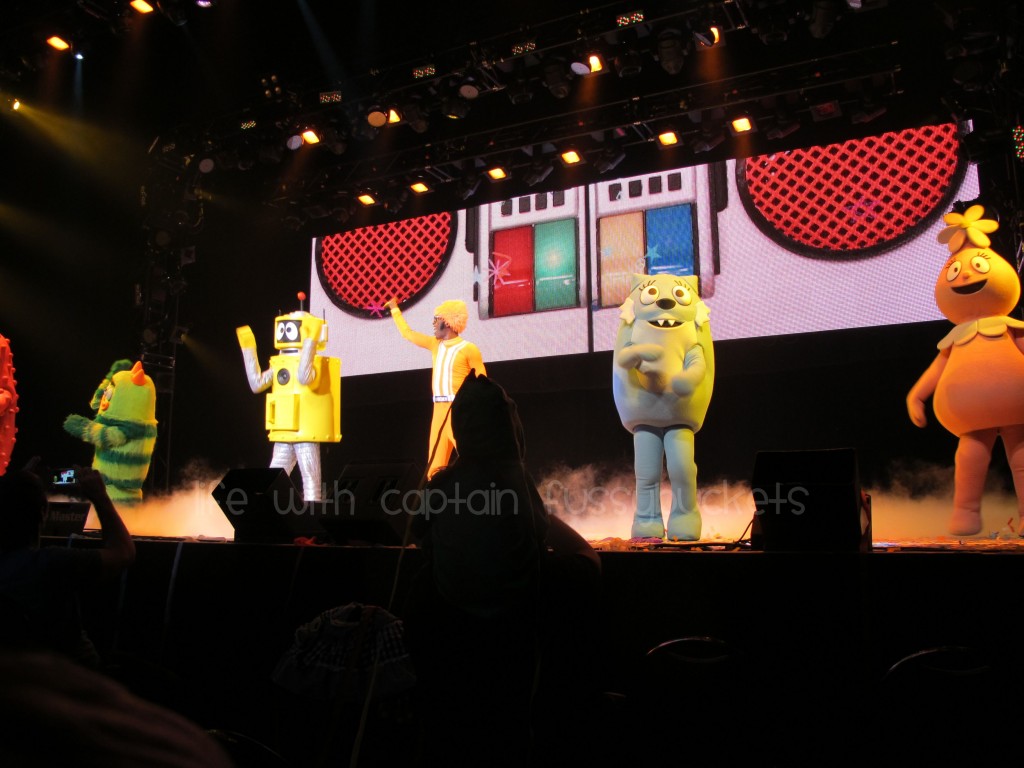 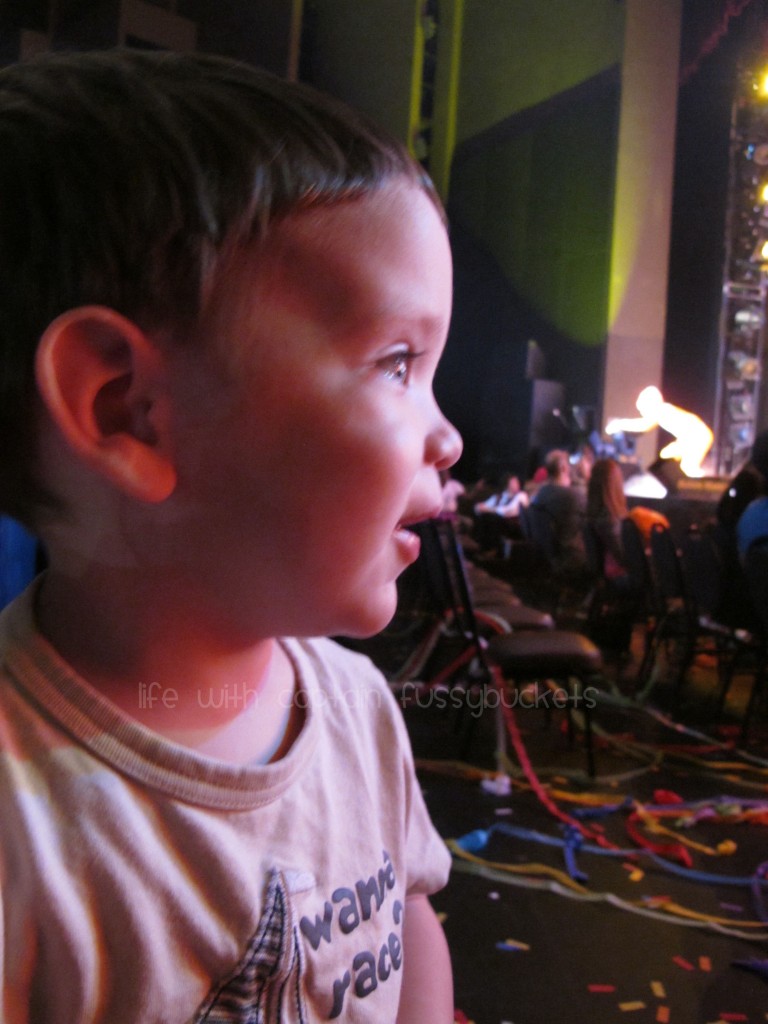 The music, choreography, costumes, special effects, and lights were totally awesome!  (But just perfect to not be too over the top for the kids!) 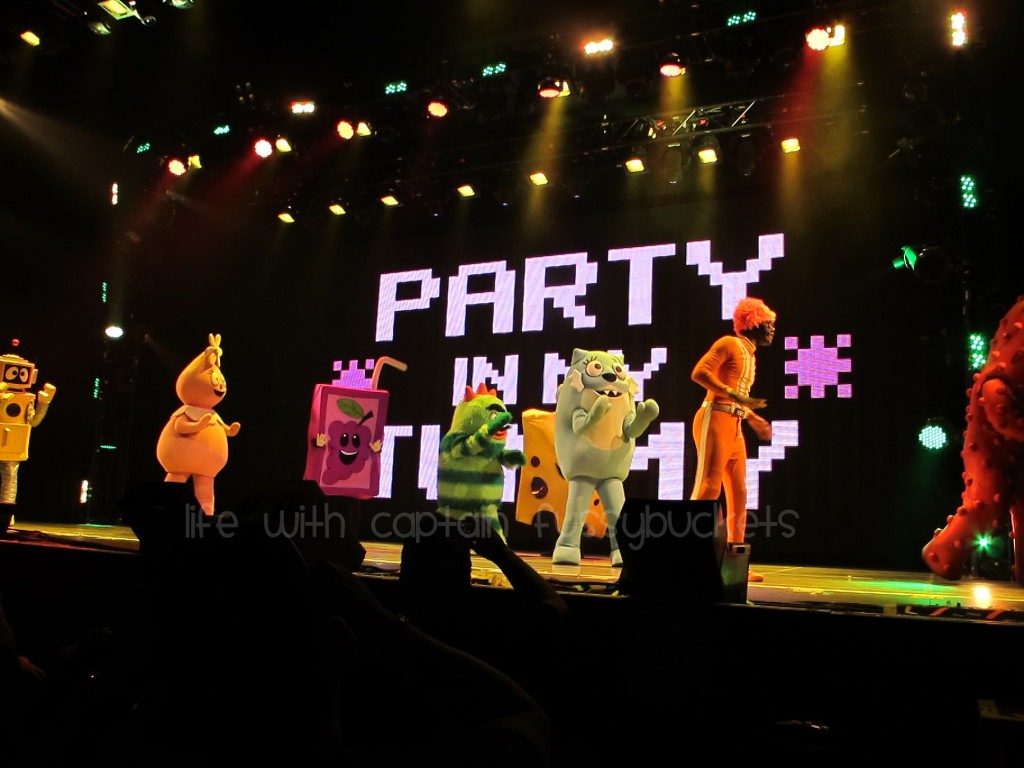 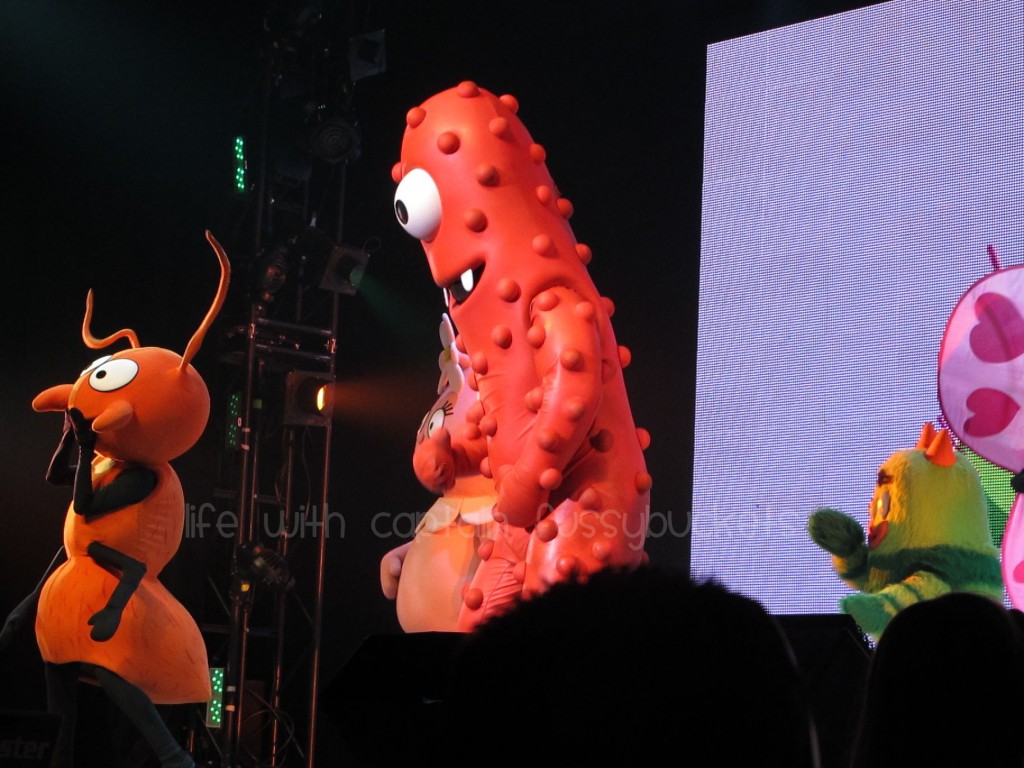 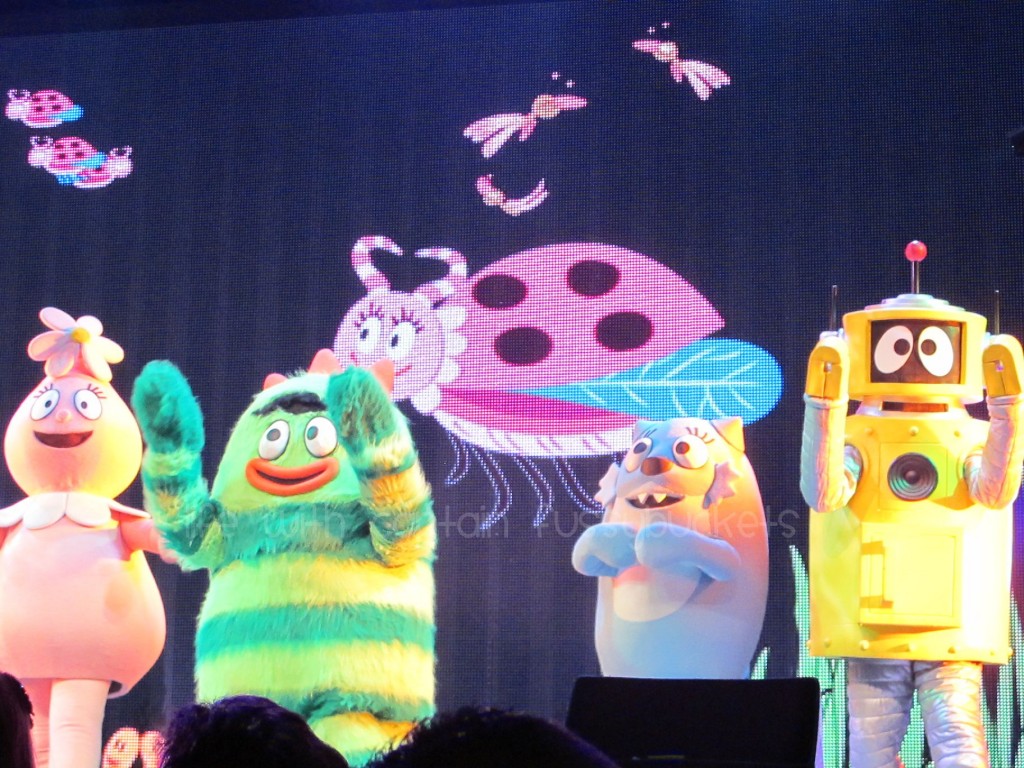 The MOST exciting part was when the Captain was picked to go on stage to "beat box" with Biz Markie and dance with the Yo Gabba Gabba friends!!  He really, really wanted Baby D to come with him, but Baby D wanted to be as far away from that as possible…until Bubba got on stage, that is. 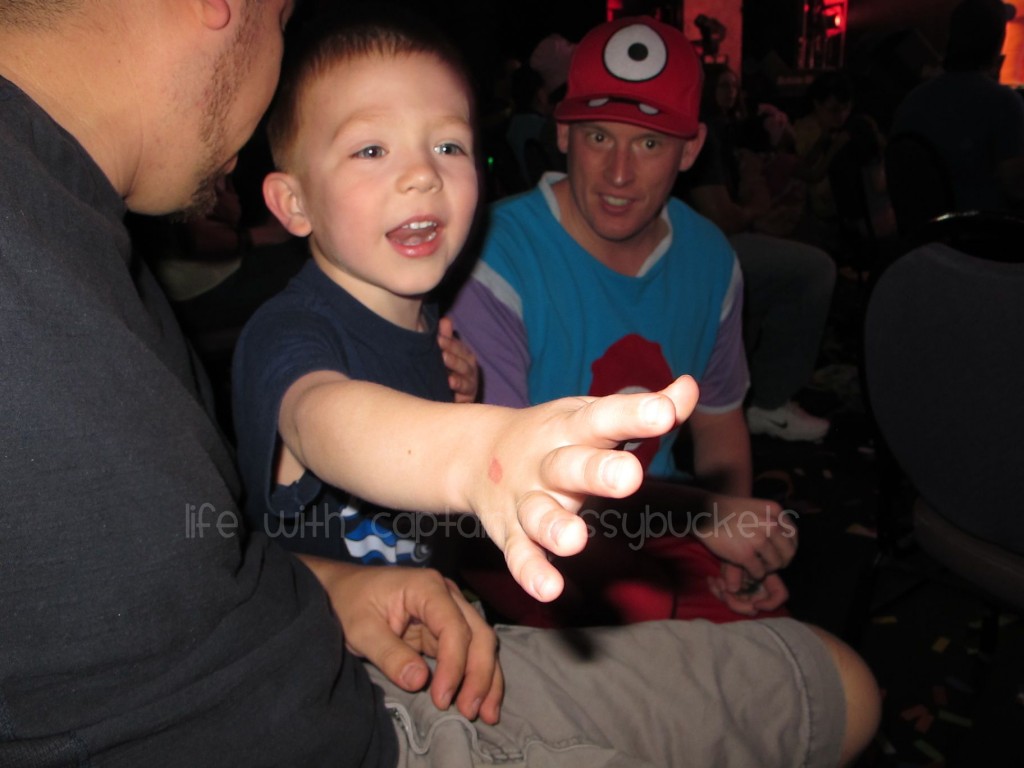 What a FUN opportunity the Captain had!!!  He said he was a bit nervous, but he was so super excited and enjoyed telling everyone about the fun he had!! 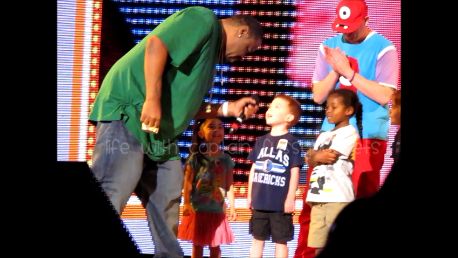 There are a few more shows in the "Get The Sillies Out!" tour!  Check out the Yo Gabba Gabba! Live! website for information on cities, tickets and showtimes!  There are also extras, like the Gabba Party Packages, that include a ticket in the first 15 rows, a ticket to the VIP room to meet the cast, photo opps, and more!

Disclosure:  My family received tickets to this show in exchange for an honest review.  All opinions are 100% mine.

Looks like a super fun show! Really cool that they have games for the kids beforehand.

Awww my kids loved yo gabba gabba . They're a little too old for it now but we enjoyed the memories. Great pics!!

We spent 6 years straight with Yo Gabba Gabba! and I couln't wait for that phase to end. Now that it has I really miss them.

Krystyn @ Really, Are You Serious?

How fun! We went to the show here, but we didn't get there early or know about the games! Looks like the boys had a great time.