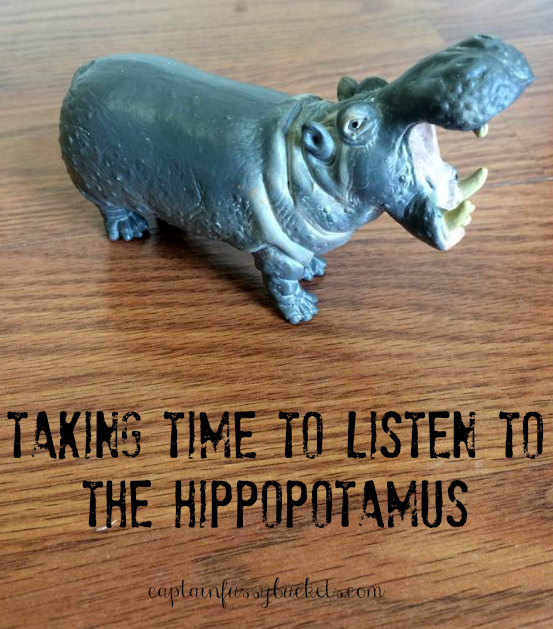 Baby Brother is 22 months old, so not really a baby anymore, but he is our baby.  He is likely more…dare I say it…spoiled…than the other two were, only because he has two adoring older brothers who think he is the funniest, cutest, BEST baby brother anyone could possibly have.  Hubby and I have also loosened up on some things that would never have flown when the Captain or D were this age, simply because we have had to.  No rigid nap or bedtime schedules because it just isn't possible and never has been with three kids.  (And let me tell you, that has made life a LOT less stressful!)  We also give him more sweets than the older two ever had at this age.  Oh, and gum.  It wasn't our intention to give him gum at this age.  I think the Captain was 3 before we ever let him chew gum and even then, he was very closely monitored!  He was our first child, and we were learning.  But with Baby Brother….he is so tall and so curious…he finds gum, sometimes chewed, sometimes unchewed..ick…and has at it.  He also gets ice cream in the carseat and makes an absolute mess because, well, it's mean to not let a one-year-old have ice cream and watch his brothers eat theirs! 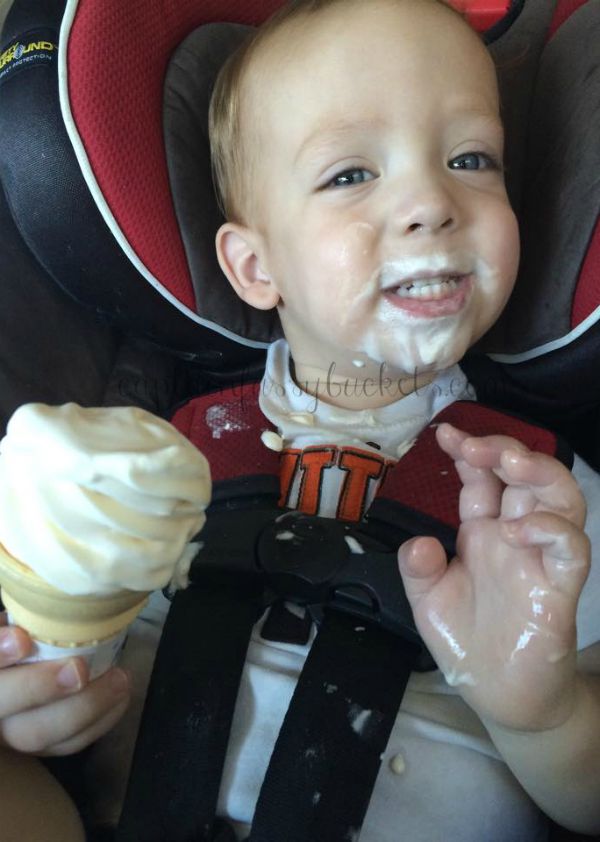 Guess what!? Carseats can be wiped off! 🙂

Baby Brother has a bit of a hitting problem, however, and that's not something we take lightly.  I think the Captain hit me once in his lifetime, when he was angry.  I told him if he was mad, he could hit the bed or couch, but he could never, ever hit another person and since he is usually obedient, he listened.  He didn't hit back when D was a toddler and lashed out when he got mad.  And of course he doesn't hit Baby Brother when he hits….for no reason.  Baby Brother hits a lot, you see.  He likes to hit, the boys laugh at him, and so this is our life.  He mainly targets D, and sometimes he hurts him.  He also throws things at him and kicks him.  He gets appropriate punishment and has to apologize, but it's a slow, slow process and a seemingly never-ending phase.  That's the thing about phases though…they WILL come to an end!

For a few weeks now, Baby Brother has been saying "hit bubbas!" and laughing.  I'll say "no, we do not hit our brothers."  I also say "it's not funny to hit." to which he replies with "funny."  He's a stinker, but he's almost two and I constantly  have to remind myself that yes, some things he "gets" and some things he doesn't.  He hears the word "funny" and repeats it.  He's not saying "yes, Mommy, actually it IS funny to hit them!" (At least I hope not.)

This past Sunday, I was staying in the nursery during church and Baby Brother grabbed a toy hippo.  It was pretty much all he played with for a good 15  minutes.  It was the heavier type of animal toy and he liked banging it on the table.  I was scared he was going to launch it at one of the babies, but he never did, thank goodness.

Fast forward to last night.  He was staying up late with Daddy and me, as he often does so he will actually sleep through the night and not wake me up early, and he brought a toy elephant to me.  He said "hit bubbas!" and it clicked.  He was never saying "hit bubbas!"  He was saying "hippopotamus!"  I said "do you think that's a hippopotamus?" and he smiled and said "hit bubbas," which is really more like "hip pobbas" now that I actually listened closely.  He was so thrilled that Mommy finally knew what he was talking about!!!  I told him that he was actually holding an elephant, but it did look a lot like a hippopotamus.  Then I started wondering what else he has been saying that I haven't taken the time to actually listen to what he's trying to say.  Mom guilt, anyone?

Thank you, Lord, for always listening to us, even when we don't always take the time to actually listen to what you're trying to say!

Love reading your blogs! I just subscribed to your newsletter.