Three year olds are weird.  I always knew this, from my days of baby-sitting and teaching Bible class, but boy, is it true.  Three is that awkward stage between toddlerhood and preschool where the imagination goes crazy and they have a vocabulary to express themselves.  Today alone, my son has used the word "poop" inappropriately and has pretended to "smoke" a piece of plastic he found on the ground.  Now, "poop" and other private words aren't bad words and we certainly don't teach him that because he has to be able to say SOMETHING to let us know how he's feeling, but we're trying to teach him that they're only words you say to Mommy, Daddy, or the doctor.  (or grandparents or baby-sitters, if the need arises, but that's a toughie.)  He's still learning and that's okay, but if you know us and you interact with my son, please know that he's in this awkward stage and we don't allow him to inappropriately talk like this in public.  Saying "I need to poop" is one thing, but saying "we eat poop" is NOT okay, obviously.  But, like I said, you don't learn these things overnight when you're three.

Speaking of overnight, I figured out the the kid sleeps longer on our floor than he does in his room, each and every night.  I guess that phase is lasting longer than I thought it would.  He's also in the stage where he still needs a nap but he sleeps better at night without one.  But then again, sometimes he misses a nap and sleeps so fitfully because he's overtired.  So, it's a challenge.  I think I'll stick with the daily naps because fitful night sleeps are the worst.  And the grumpiness that ensues the following day?  YIKES.

The Captain also has his hang-ups.  He's hung up on the fact that every woman who is wearing a bathing suit or is exposing her stomach in any way MUST be a Dallas Mavericks' cheerleader.

He's also learning to spell, read, sound out words, and pay attention to context clues.  That makes spelling certain words difficult for Daddy and I.  But, the fact that he's learning how to do such things is remarkable and we'll take it.

And…we've known this for a long time, but the little dude has a remarkable photographic memory.  He remembers things, honest to goodness, from when he was almost two years old.  Sure, we have pictures of things to jog his memory, but from those pictures, he can remember other things that happened at that time that we don't have pictures of.  He continues to surprise us every day, with random things he remembers from two houses ago!  It's crazy!  This, also, is keeping us on our toes and being careful not to expose him to things beyond his years, if we can help it.  (not sheltering, mind you, not making him live in a bubble, but introducing things slowly so we can attack the worldly things one at a time!)

So, all in all, three year olds ARE weird, but this is such a fun, fun age.  He loves his little brother SO much (even though he continually "roars" in his face and makes him upset.)  They are best friends and we are so blessed by these two, weird little dudes!  🙂 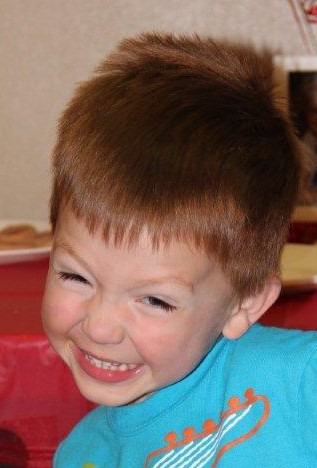 Disclaimer:  I am using "weird" in the best way possible.  Being "weird" is not a bad thing!

Just want to let you know, your post cracked me up! Three is a funny age. Testing boundaries- even verbal ones. And kids think gross things are just so, so funny. I'm sure he finds himself hilarious. lol Glad you can look at this as a normal stage of development and not worry (too much) haha!