Yesterday was Easter.  We don't do the Easter Bunny at our house although I see nothing wrong with him.  I just was a bit obsessed with Santa and the Easter Bunny as a child and would rather my kids not be greedy little boogers like I was.  I have two older brothers that were not as obsessed as I was, so it was all me, not my parents or anything else.  It was all me.  We do still celebrate holidays and our boys get candy and gifts.  After seeing some of the HUGE Easter baskets in stores and online…..I really gotta say….tone it down, parents.

Easter eggs are one thing.  Plastic pieces strewn all over my floor after the hunt is over, candy wrappers, then later, broken plastic eggs on the floor and hurt feet after I have stepped on these awful booby traps.  I was smart yesterday, I helped the boys empty their eggs and then I scooped them all up and put them in a bag for next year.  But I still can guarantee you that I will be finding eggs for the rest of the year, hidden under the TV, in the playroom, and under the refrigerator.

I always had Easter eggs with candy in them.  This was fun.  But now, every kid not only gets a million Easter eggs, but they get elaborate Easter baskets, filled with MORE candy, small trinkets, toys, and even more junk to pick up off of the floor.  Why do parents do this to themselves???  Unless your child is an amazing cleaner-upper, I don't know why anyone would subject themselves with more…for lack of a better term….crap!  My kids get enough crap without ever celebrating a holiday.  They were thrilled with their coin filled eggs that they found in our backyard yesterday.  (They were also thrilled with the chocolate, berries, and cold hard cash that Grandma brought to them for their savings.)  The Captain asked for a chocolate bunny for Easter  so I got the boys a small one and they got to eat it before church.  This was special.  And they were both so surprised and both kept saying "thank you for my chocolate bunny!"   Well, Baby D's was more like "tat too" but I knew what he was saying.

Maybe my kids are just young and I don't know what I'm in for.  Maybe the madness peaks at about 8, and they won't be satisfied with one small chocolate bunny and a little money.  I'm not sure, but I do know that if they got a huge Easter basket, each, after getting coins and chocolate for St. Patrick's Day, after getting a huge box of chocolates and red dyed lollipops for Valentine's Day, after getting a gazillion gifts for Christmas, (which really, they did,) after getting a huge bucket full of Halloween candy, they would never, ever, be satisfied and next year I'd have to outdo this year.  I don't want to be cheap, I don't want to be lazy, I don't want to be compared to other parents, but I have already realized that kids as young as three do remember last year and they will expect the same thing plus more next year.  Plus, there are always pictures.  That's why I'm always AMAZED that parents willingly take so many pictures of their first child's first birthday with the gazillion of gifts that they're sure to get (because it's exciting to spoil your first child on his first birthday, I know!)  Start small, don't take a picture of all the gifts they got, and they'll never have to say "why don't I get as many gifts now as when I was a baby??"

It's not too late to tone it down.  I promise.  And if you really want to spoil your kids, at least go today and buy up all of the unsold Easter candy, toys, or clothes and give it to them a day late (or next year, in the case of toys and clothes) instead of paying ridiculous prices for….well, crap.  😉  Or buy something a little bigger that is more eco-friendly, educational, nutritious, longer lasting, and/or useful!

I apologize if this post offended you.  I'm not judging, I promise.  I'm just saying that you could totally have it a million times easier and raise a less greedy child, as well, or at least have a shot at a less greedy child.  😉  I'll honestly tell you that my kids are greedy and have too much junk, but, we're working on that. 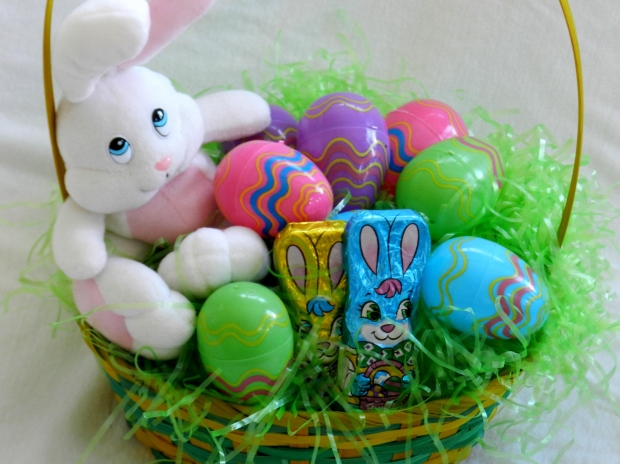 Great post! We keep Easter toned WAY down... they did get some candy, but not much. The prizes in their baskets were books and stickers. That's all!