Something strange has happened, but apparently, it's fairly common.  Baby D, who just turned 19 months old yesterday, is acting like a full fledged two year old.  Just in the past two weeks or so, he's started becoming far more defiant than ever, saying "NEH!" for 'no' and even hitting and pushing us.  This phenomena is very odd, because while he was getting into trouble a few weeks ago, he wasn't being defiant and still got his feelings hurt when we corrected him.  But now……it's like a different kid….a kid in the midst of the terrible two's.  How is this right?  I know from raising Captain Fussybuckets, that things will get far worse before they get better.  In all honesty, the Captain is only now beginning to creep out of those Terrible Two's/Three's, but man, he still has his days.  But his behavior currently resembles the behavior of a preschooler who likes to get attention by talking about poop and other taboos, not a toddler who is seeking independence and testing limits.

I was thinking about when we hit this phase with the Captain.  He was about 22 months when it came on fully, possibly even later, but it was before his 2nd birthday.  We were houseparents at the children's home and, while he had plenty of good influences, let's just say there were some not so great influences, as well.  Let's be honest, there were teenagers living there, so you can only imagine the stuff he heard at that age.  BUT, he survived and then got a new baby brother, and really, he didn't hit the terrible, Terrible Two's until closer to three, I'd say.  Sure, there were the tantrums at the store, the whole having to share the attention of Mommy and Daddy with Baby Brother, the not getting his way thing, but as his independence blossomed and he became more aware of things, the scarier his behavior became!  And now that I think about it, maybe Baby D has more of an issue because he isn't as verbal as the Captain was at this age.  While he's learning to say more words all of the time, the Captain was pretty good at letting us know, through talking, what it was that he wanted.  Baby D isn't quite there yet, and I'm sure it's highly frustrating!

I cringe a little every time someone says to me:  "This too shall pass."  Of course it will pass, but I need some sympathy here in the moment!  ha!  Baby D will grow out of this Terrible-ism and become an independent, sometimes whiny preschooler like the Captain has.  And then, they'll become obnoxious ten year olds and awkward 12 year olds and then miserable teens, and I'm sure that I'll wish I could go back to the Terrible Two's and Three's.  I try to keep that in mind when parenting my two precious boys, really I do.  In all honesty, I am glad they are independent and see what they can get away with, because that means they're healthy and know how to think for themselves, and that will be so beneficial as they get older.  And who knows, maybe it'll make me smarter, too.  🙂  Being a parent of two boys has definitely helped my patience level!! 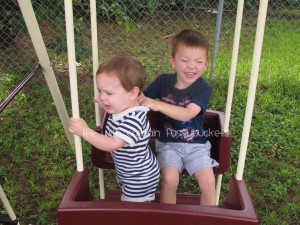 I always said that 3 was much harder than 2.  I feel that they are still babies when 2 but when they hit 3 - watch out, they're big kids!

Ah, the terrible twos, made so much more difficult for parents when there is more than one young child or toddler around that age!

I think boys hit terrible twos early!  My boy started when he was around 18 months and he is almost 7 and it still has not ended. lol  My little girl has not hit them yet, she is 4.  I hear girls hit it around preteen years. :)

Yes, yes, yes! Lol, when my son turned 19 months old, it was like the terrible two's hit.. it is good to know I'm not alone.