This past week was a bit challenging for this Mommy of two.  It all started in the middle of last week, Captain Fussybuckets and I were "FaceTime"-ing with my parents and I jokingly asked him if he wanted to go stay with them for a few days.  To my surprise, he got VERY excited about the possibility and said he wanted to go and "I won't cry!"  He's been having a bit of separation anxiety, so I laughed it off because I knew that he would never go.  But he wouldn't stop talking about "going to Grammy & Grampy's house."  And it just so happened that my dad was going to be in the area that weekend, so after talking with the hubby, we agreed that Grampy could come and pick up the Captain on Saturday morning.  He was SO excited and kept asking when he was going to go see them.  He asked a few times if we could go with him and I just said that we couldn't.  We had things scheduled and Daddy had to work.  So Friday night, the Captain and I pack his bag.  I put enough clothes for more than the time he would spend there, and he threw in a few "essentials" like a Superman costume, a few toys, you know, stuff a three year old needs!

Saturday rolled around and it was cold outside.  But, Captain Fussybuckets wanted to sit on the front porch and wait for Grampy.  He just couldn't wait!  I had a girls' day planned at our church, so I had to leave before Grampy got here, but the hubby reported that everything went fine and the Captain left willingly with Grampy.  Phew!  I didn't think he could do it.  Maybe it helped that I wasn't there, because I probably wouldn't have let him go!  Okay, not really, but it would've been really hard.  We have left him only about three nights in his life, two nights when Baby D was born and the other one when Baby D, Daddy, and I went to a job interview.

The plan was for him to stay until Monday (two days) and then we would both drive halfway and pick him up.  But he was having a blast and didn't cry one time, so he stayed until Wednesday, and Grammy and Grampy brought him home.  Wow!  My big boy did a great job, had a wonderful time with his grandparents, and yes, maybe we got a little rested up (although not the first  night…I was almost a wreck!)  What a special time for him to have, with memories they will all treasure.  Thanks, Grammy & Grampy! 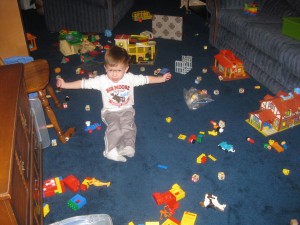 But wait, there's more to Anxiety Week for Mommy!  Baby D has had five ear infections in his life time…that we know of.  The first was in August and it was gone with some antibiotics.  But the past two months have been filled with four ear infections, trips to the doctor, 2 antibiotic shots, a nearly ruptured eardrum, four rounds of antibiotics (some with extended doses, even).  It was time to go to an ENT doctor.  We did, he suggested tubes, and on Thursday, my big man was super brave and so were his parents!  It was relatively painless for all of us and I'm so thankful to the nurses, anethesiologist, and the doctor.  We were in and out of the surgery center in less than 2 hours and the procedure itself only lasted 10  minutes.  The worst part was when he woke up and we weren't there, he was scared, sleepy, and confused, I'm sure.  But, they got us in there quickly and we got to scoop up our baby boy.  He spent a lot of Thursday sleeping off the meds, and I promise, he is already a happier little boy.  I hope that the tubes do what they're supposed to do for the long run, but we are very happy with our decision.  Hopefully our healthy Baby D is back!

Thanks to God, my amazing husband, supportive friends, family, and Grammy & Grampy for being there for us! 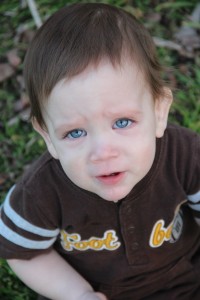 Awww, tough week for mommy indeed! So glad that Captain had fun at his grandparents and here's to no more (or lessened) ear infections for Baby D!