There is a commercial on TV that is urging parents to buy a certain program so kids can get “a head start on learning.”  I truly believe that pushing a child is not going to work for his/her education.  I think surrounding them in a proper learning environment can be extremely beneficial.  I am, by no means, saying that I know more than anyone, for sure, but I do want to share a few things that have been very helpful to remember in our house. 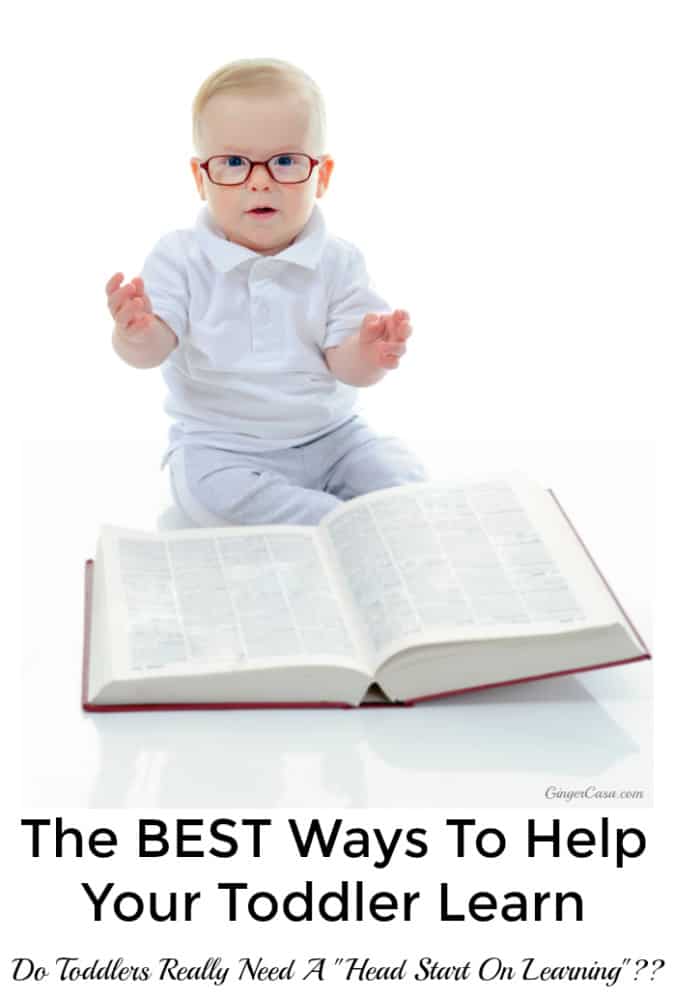 1.  Independent play.  Captain Fussybuckets was always an inpendent little dude.  While he loved social interaction, he also wanted to be left alone to figure things out on his own from a very young age.  I think this helped him learn about the world around him.  I see Baby D going through the same stage right now.  We’ve baby proofed and we also keep a watchful eye over them, but they are free to roam around the house (with bathroom doors closed and dangerous items put up, mind you) to explore and learn about different things.  Trying to ever keep them in a play pen when they were awake was always a huge joke!  They have access to their toys, puzzles, magnetic letters, pretend play stuff, and more.  Is it a mess sometimes?  Oh yeah.  But if everything is locked up, what good does that do for them?

2.  Positive play with adults.  Now that the Captain is three, he’s not so into the independent play thing, as he wants Mommy, Daddy, or whomever to play with him.  This is also crucial to his learning and is just a stage of his life.  He learns by watching other people.  That’s why we want to surround him with positive role models so he can learn not only how to build a really tall block tower by making the bottom sturdier, but so he can form good morals and ethics.  Yes, it does sound silly, but there’s something about playing with a three year old that repeats everything that makes you actually think about your reactions to things….because when you see your three year old act out the way you have, you know that they are soaking everything in, even when you think they’re not looking or listening.  For instance, in our family, we’re growlers instead of cursers.  If something happens that we don’t like, we say “rrrrrr!”  And, of course, both of our boys do the exact same thing, just from watching us!

3.  Educational TV that has a purpose.  Some people that are probably smarter than me claim that kids shouldn’t watch TV before the age of 2.  That’s fine if you believe that and instill it with your kids, but it’s not for our family.  The Captain learned SO many things by watching a little educational TV here and there, even before the age of 1.  It helped develop his love of music, helped reinforce the sign language that we were teaching him (and helped us learn, too!), taught him about things he can’t experience in Texas very often, (like snow, for instance!), and also helped him begin to recognize his letters, numbers, and letter sounds.  He was watching and enjoying the Leap Frog DVD: “The Letter Factory” at the ripe old age of one year old.  He would ask to watch it.  I first got this DVD back when I was teaching kindergarten, because my kindergarten teaching mom told me about it.  I found that this one DVD helped the majority of my students learn their letter sounds better than any other system we had in place.  I’m sure some people scoffed at me using a DVD to “teach” my students, but you know what?  If it helps them learn and isn’t bad for them, I’m all for it.  Twenty minutes of an education DVD as a special treat is much better than other stuff kids watch, trust me.  And the audio/visual learning that some kids need is well, just what they need!  Sure, we did LOADS of other things to teach letter sounds, but this DVD was the one thing that really worked for most kids.  And it worked for the Captain.  At 2 years old, he could recognize all of his letters and now, at at age 3, he can recognize all his letter sounds and is even beginning to sound out words to read and spell.  Sure, all kids are different.  If they’re not interested, they will be at some point, but if you find something that works, let it be!

4.  Don’t rush them.  If Baby D is 3 and doesn’t have any interest in letters or The Letter Factory DVD, I’m not going to push it.  If tomorrow the Captain wakes up and doesn’t want to do anything educational, it’s okay.  They have time.  If they’re interested in something, you should definitely utilize it, but if they’re not, don’t sweat it.  Let them be kids.  Sitting down with a book and forcing your 3 year old to try to sound out the words is going to do nothing but cause stress and possibly make your them hate books.  So let it be.  I think our society has put a lot of pressure on parents to teach their kids and “prepare them for school.”  Every single day, our children are presented with so many learning opportunities through play, social interactions, and just by living and asking questions!  They’ll be ready for school and a life of learning if you surround them with love, attention, and opportunities to learn.

5.  Early intervention.  With #4 said, if you feel something isn’t right, talk to a doctor.  I know some amazing women who were keen on their kids’ development.  When they weren’t making sounds when they should have been, they got early intervention for their kids.  They are being advocates for their children’s learning and that is so remarkable to me.  I know that God has hand selected these parents to care for these amazing children so they can learn how to express themselves through sign language and/or speech.

6.  Last, but not least, talk to your kid.  May seem obvious to some, but you are your child’s first teacher.  Talk to them.  And not in a baby voice! 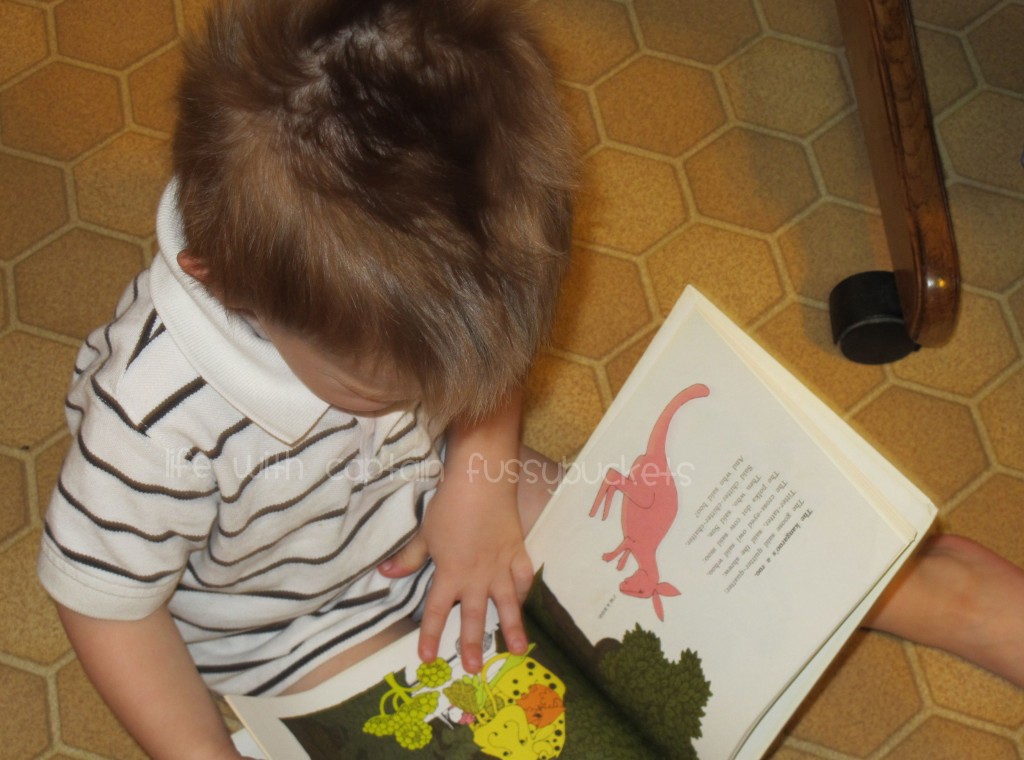 Agreed. I've always led my children from early on in learning but if they weren't interested I would never push it. They have always liked to write and learn new things.

My son is almost about to turn 1 and I am already over my head in all the education talk. I can only hope that my son achieves all the potiental he has and still has fun.

me, too!  Having fun is the best part and I don't think we should take that away from these BABIES!!

Great tips! I think this is all very important. We have done many of the same things. I have a girl, and at the age of 2 she was interested in letters. We love those LeapFrog videos too. Even now, she loves the newer ones about math and phonics. And PBS cartoons? They are her favorite and I am amazed at what she has learned. We are now doing Pre-K and she is a sponge, and wants it more than I do. :)  Thanks for posting this. I sure appreciate it. Every kid is different, and that is what I like about the homeschool concept. You can teach at your own pace.

My children have always roamed the house (with babyproofing in place) and yes, my house during the day has been filled with toys, music, and tv in the background. My boys have always mixed their toys and learning tools and never chose one over the other. We make learning items readily available to them so that if they want to play with learning magnets or books, they are at the right level for them to reach, touch, and use. Great article!