Sleep is one of my most talked about subjects, just ask any of my friends on Facebook!  I'm constantly posting about how the boys slept, how I slept, what woke me up, etc.  And you blog readers know that I like to post about this topic, too.  🙂  So a few weeks ago, when I read "Nap Time Is… When?" at Tales From The Nursery, I had to leave a comment and now I want to expand on it some more.

In the post, Darcy talks about how her daughter, who was almost 15 months at the time, is very "go with the flow" and doesn't have a set nap time or a set bed time.  And you know what?  I think that's fabulous if you can make it work.

Captain Fussybuckets was, and still is, a kid in need of a schedule.  I tried the go with the flow thing and he ended up taking short naps in my lap while nursing or just be absolutely miserable because he was exhausted but it was already past the point of sleep.  If that doesn't make sense to you, you're lucky.  If it does, I know you feel my pain!  An overtired baby is NOT fun.  The Captain has always been go, go, go and very rarely has he actually told us, through yawns, actions, or words, that he was ready for a nap.  So, we had to wing it, put the kid on a schedule (of sorts) and do what we thought he needed.  It was more of a "take a nap X hours after he wakes up" sorta schedule…not "He must close his eyes at exactly 10 AM every single day" schedule.  Within a few weeks of putting him on a schedule, he was sleeping better at night and during the day.  We were less stressed out over his sleeping patterns, as well.

Today, at 3 years old, he's still a sleep fighter.  He doesn't have an absolute bedtime, but we always aim for a certain time.  Lately it has been 9 PM.  Sometimes he's asleep by 9:20, other nights it's after 10.  If he were in school or had to wake up a certain time every morning, we would work harder at getting him to sleep earlier, but for now, this works for us.

Now Baby D, on the other hand, is far more laid back and is usually easier to get to sleep.  Give him his paci and his crib and he'll konk out in no time (usually!)  He tells us when he's sleepy and always has.  He has a flexible nap schedule, but if he's yawning earlier, we put him down.  And if he's going nonstop and it's naptime, we don't force him to go to sleep.  He's pretty easy going and when he has to miss his morning nap on Sundays for church, he's a little grumpy, but it's not horrible.  He's more like Darcy's daughter in that he can go with the flow and adjust as we need him to.  And he also tells us when he's sleepy, which is a small thing but we are very thankful for this!!

So what's the point of this nap story?  Something I've always said:  all kids are different.  And all parents are different, too.  It doesn't make any one mom BAD or GOOD, but you gotta do what works for your family and shrug off those comments that question how you are doing things.    Only you know your child and his/her needs! 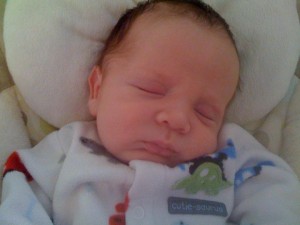 My kids were completely opposite sleepers. My daughter sttn at 10 weeks, my son took 7 months- but he is definitely the better sleeper! I do whatever I can rightfully do, to make them sleep!

co sleeping worked great for us until he got to be a year and started taking up half of the bed.  Then we got him on a toddler bed and he would get up every hour. So as of thee nights ago we got him into his pack and play and he only gets up once now to eat!!!! Good luck with yours

Exactly what I say when it comes to co sleeping. Works for some and not for others!

Even though it took my dude awhile to sleep on his own and be a good sleeper I am so happy. I really hope when we have a second one it goes just as good.