This post was brought to you by the Waxahachie CVB and Scarborough Renaissance Festival in Waxahachie, Texas.  We were provided with free tickets to faciliate this post, but all opinions are mine. 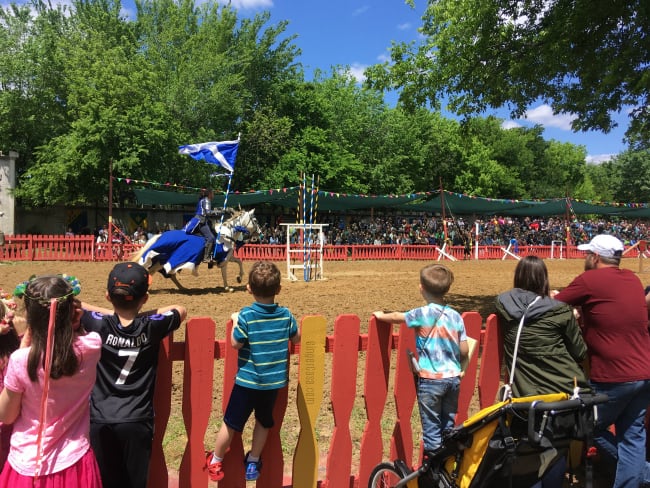 We moved to this area of Texas (south of Dallas) almost eight years ago.  When we first moved here, we noticed castle like structures and wondered what it was. Then, in April and May, we noticed lots and lots of traffic on Saturday mornings, especially. The Scarborough Renaissance Festival, or “Scarborough Faire,” as most people around here call it, comes to Waxahachie, Texas for only two months out of the year, and only on Saturdays, Sundays, and Memorial Day.  It honestly does not look like much from the road, just the “castle” entry way and a field of parking.  After hopping online and when we finally visited a few years ago, we now know that there is so much beyond that desolate field!  There is a world of enchantment, fun, excitement, and folly!

The opening ceremony begins at 9:45 AM and the closing ceremony is at 6:45 PM.  There are plays, shows, music, stores, food, drinks, rides, a petting zoo, along with security personnel, first aid, restrooms, water fountains, ATMs, and everything is handicapped accessible.  The actors that portray the Royal Court, villagers, and peasants are trained by the Scarborough Academy of the Performing Arts and can be recognized with a special medallion.  (There will be times you will have trouble distinguishing between a performer and a dressed up guest, trust me!)

There are people selling maps for $3 in the parking lot, but I just took a picture of the map when we got in and referenced that.  Here it is for you! 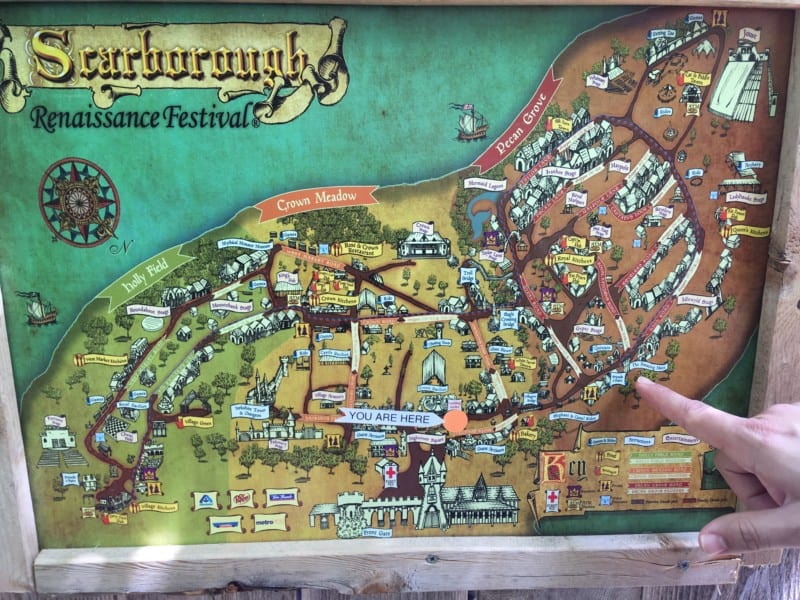 My kids really liked the Juggling Toys shop, because someone was there offering free lessons! 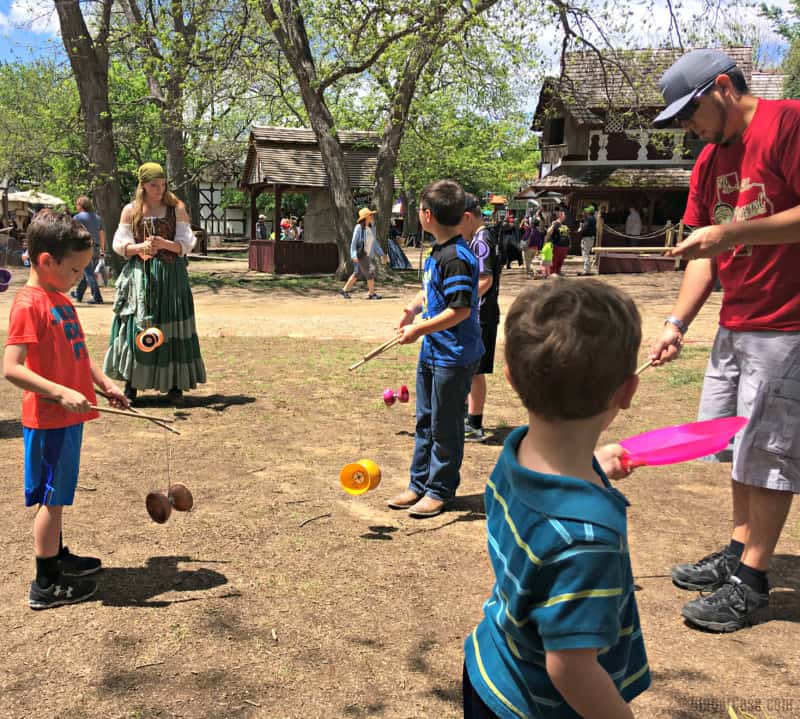 The camel and elephant rides were a hit, too.  The elephant line was super long, so we were thankful they chose the camel: 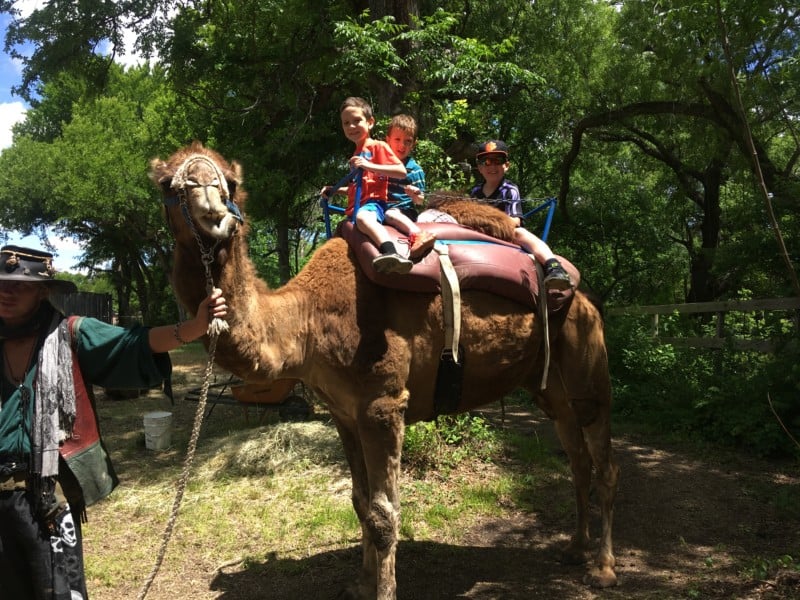 Archery was a hit, too! The oldest was able to help the other ones because he has been practicing at home. 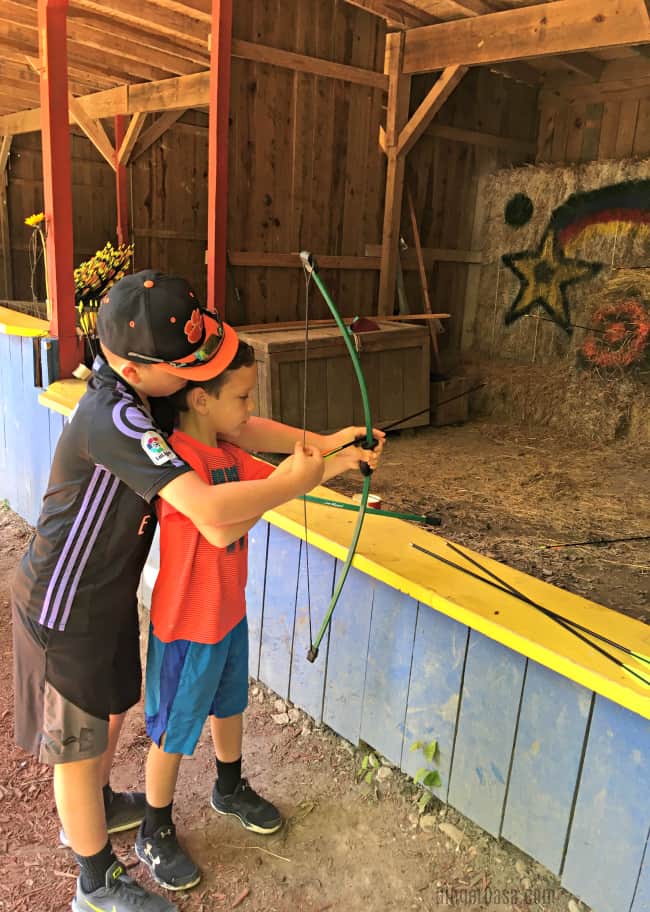 Through the festival are many places to eat and drink (regular bottled tea, sodas, and water, as well as alcohol.) 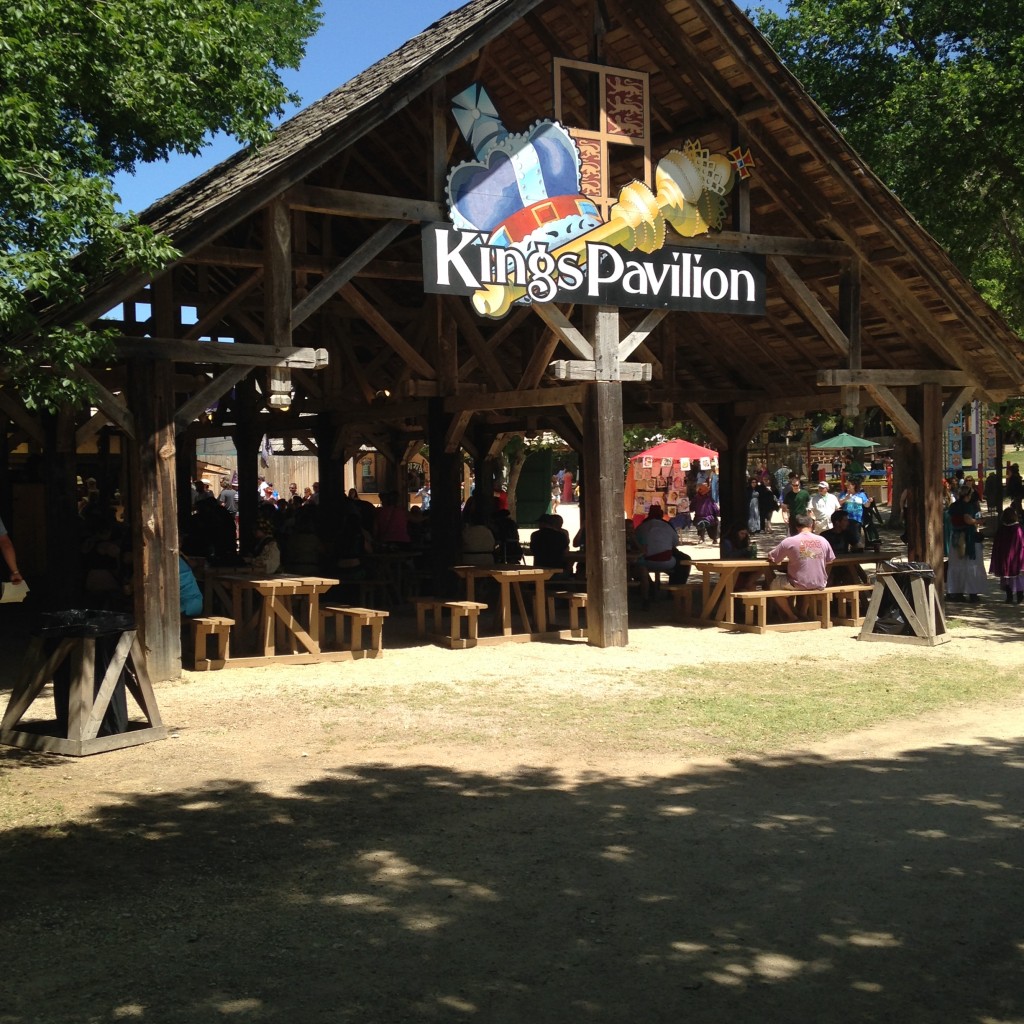 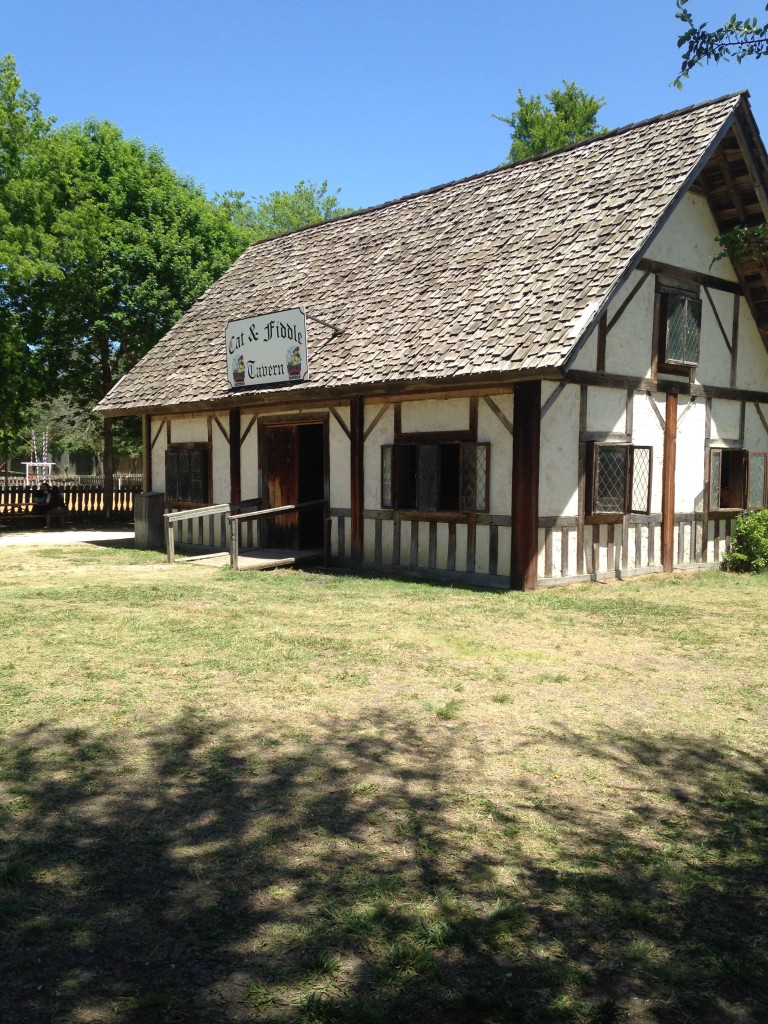 When we went a few years ago, hubby had a turkey leg and the boys and I enjoyed Chicken on a Stick.  It was really good, too!  The boys ate theirs and it was flavored well…definitely way better than I had expected! There are MANY more food options, not just what you see here!

Our oldest eating a turkey leg back in 2014: 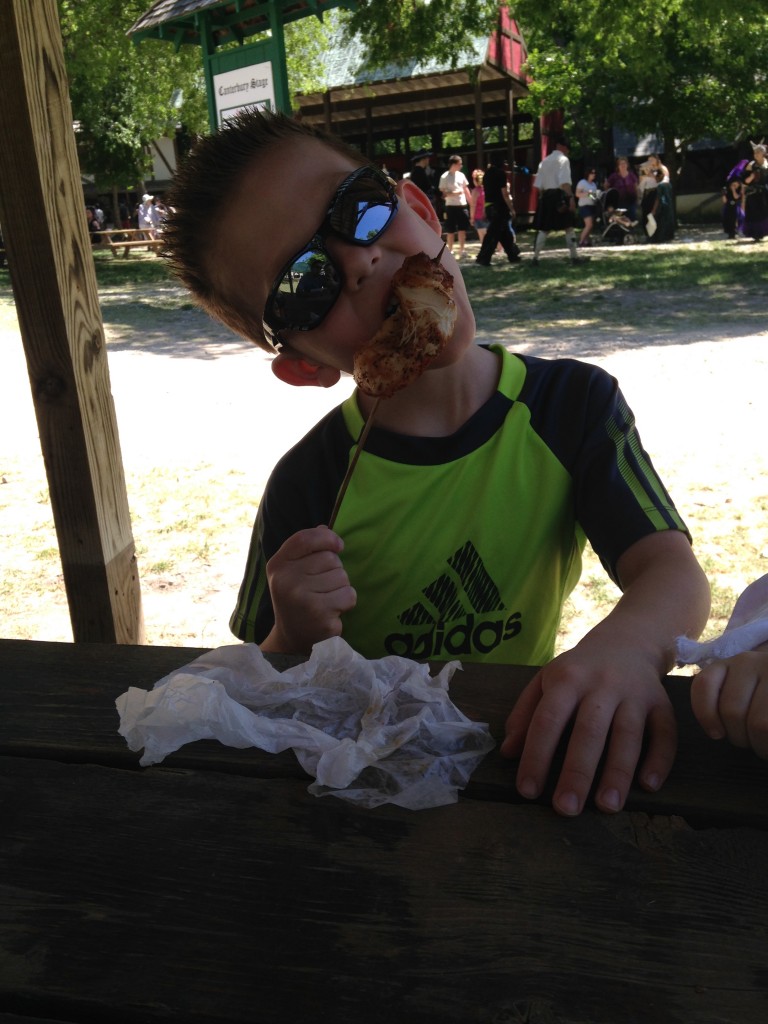 This year, we had just eaten lunch, so we just had root beer floats, cappuccinos, and funnel cakes. 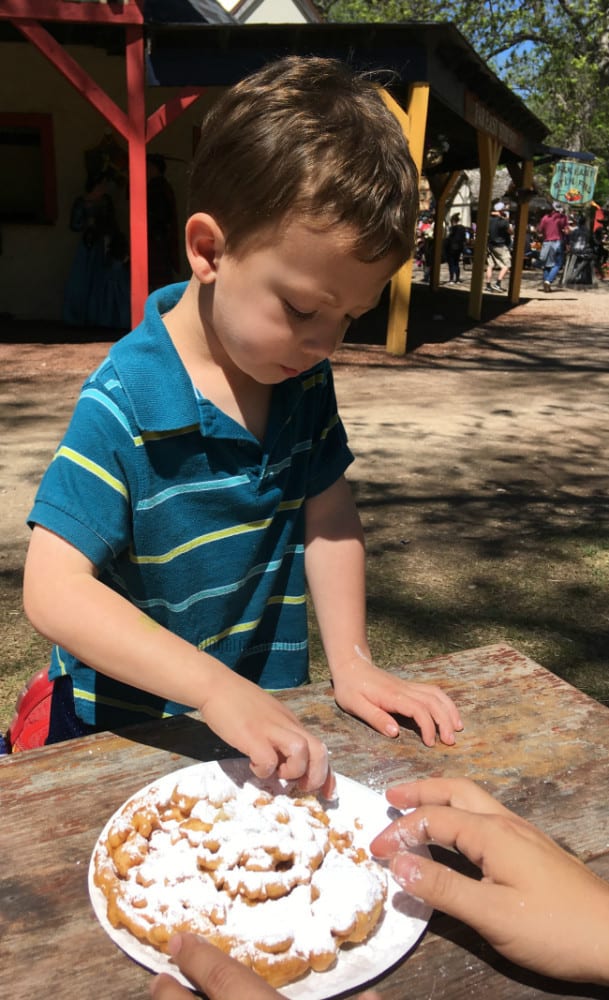 The shows are really awesome and have trained performers acting and doing tricks.  Some of our favorites were Cale the Juggler and magician.  Some shows are not for kids, though, so make sure to check out the signs and your program to make sure you don’t wander into an inappropriate for kids show.  Other popular shows include the Fire Whip Show, Kamikaze Fireflies, and Arsene The Magikhana Show.  There are countless choices including dancing and music, as well, so make sure to scout out your favorites and plan your day accordingly! 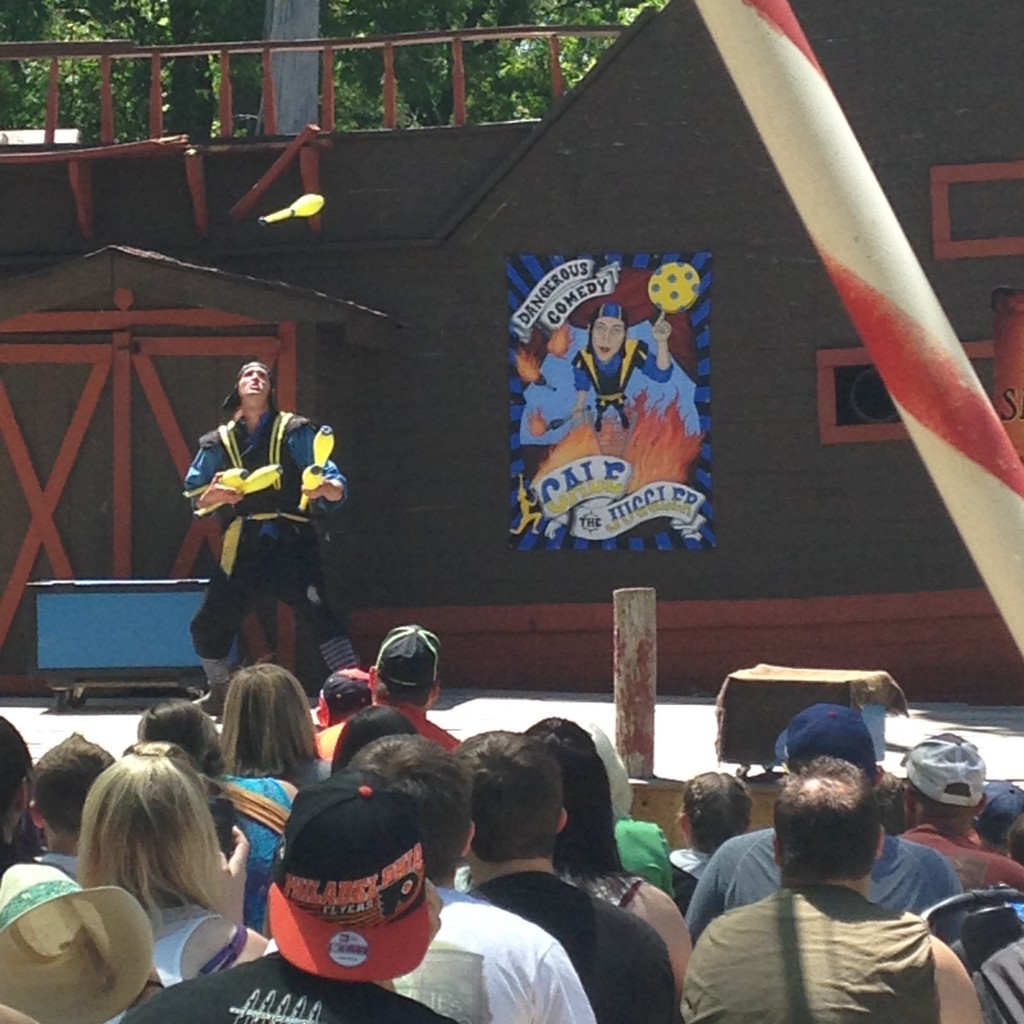 Some of the boys’ favorite parts of the day included the rides, that are all man powered.  This was The Crow’s Nest: 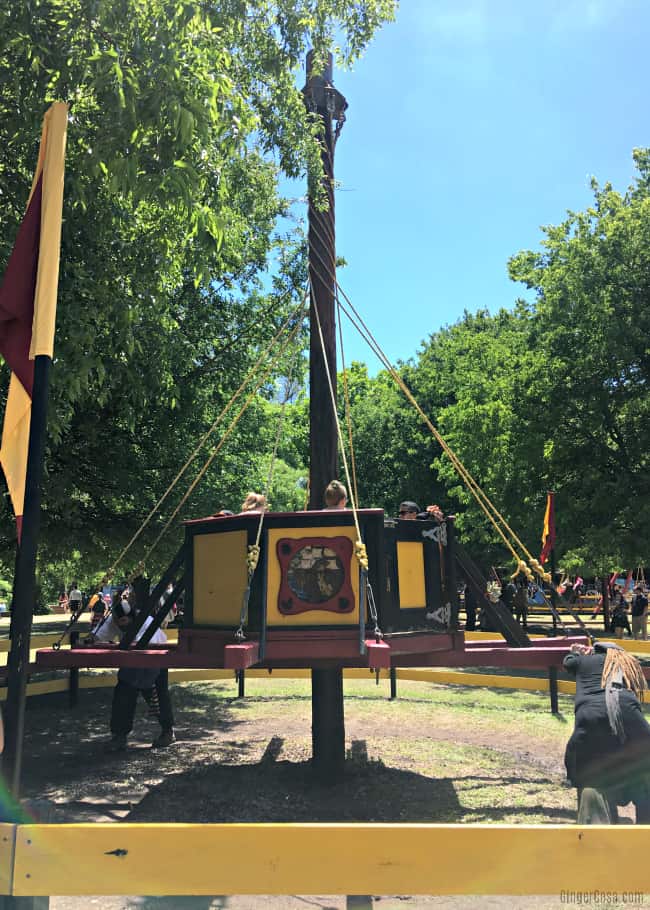 The men spun them up and down about three times, so they were all pretty queasy after the ride!  It was fun, though, they said!

The rides are all about $3 per person. 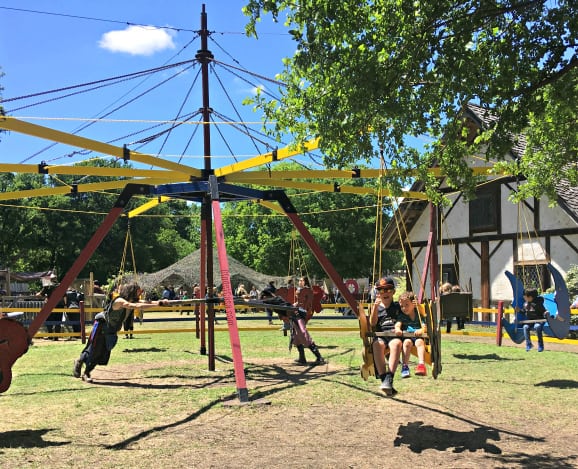 I think the 9 year old had enough at this point…ha! 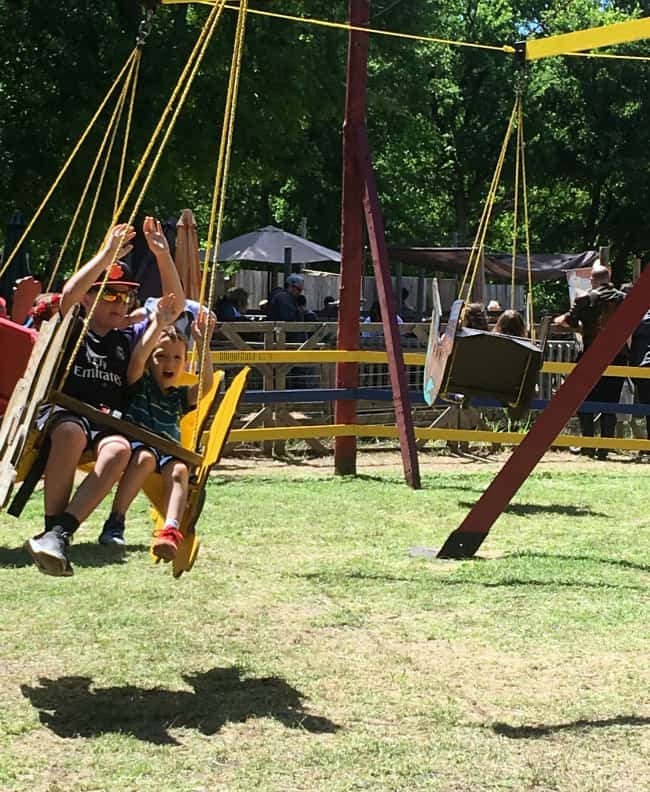 Their favorite ride was the jousting ride:

The boys also really enjoyed the Petting Zoo the last time we went.  For $3 a person, you get a wristband that is good for all day entrance at two different parts of the petting zoo.  Food for the animals can also be purchased. 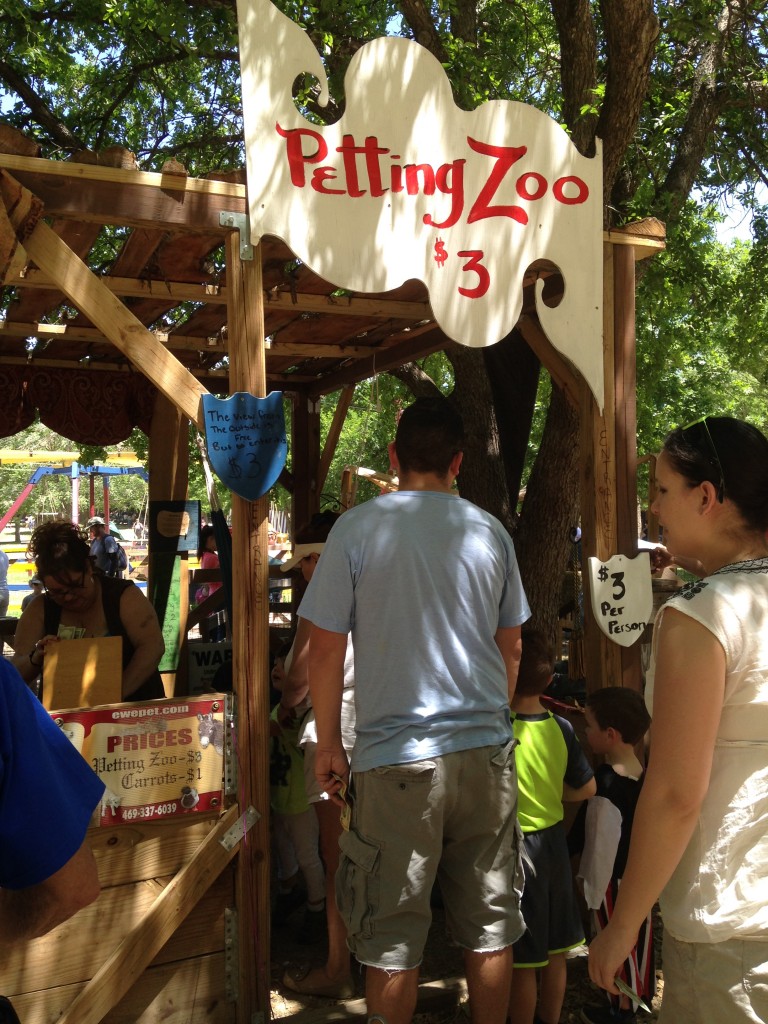 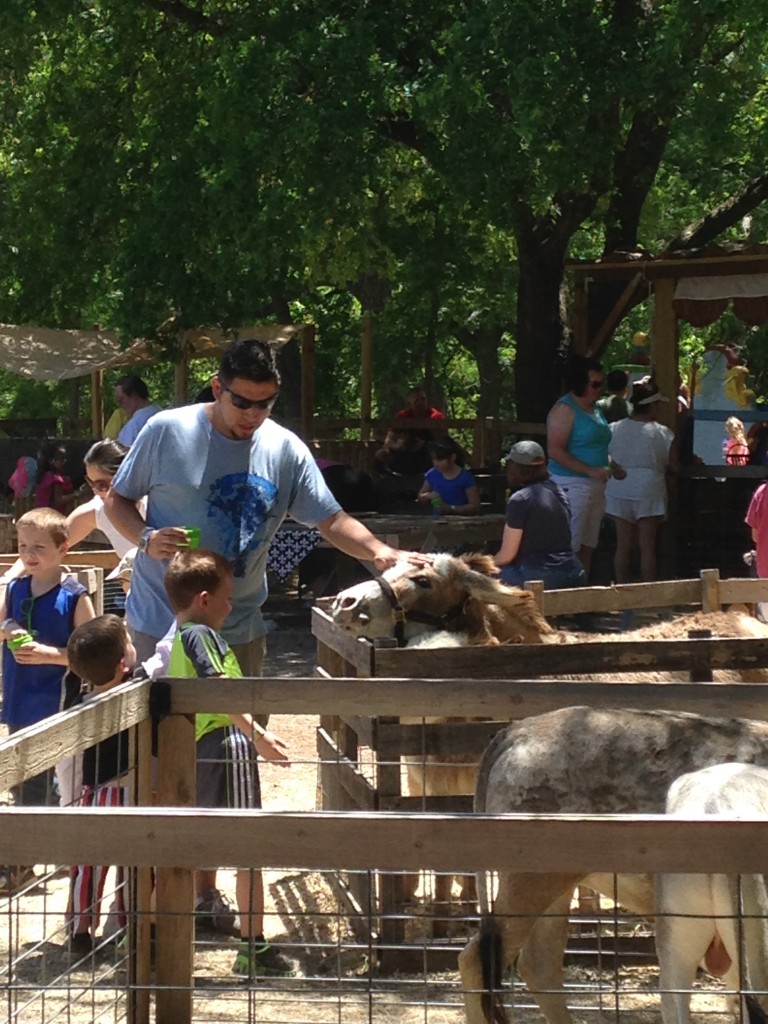 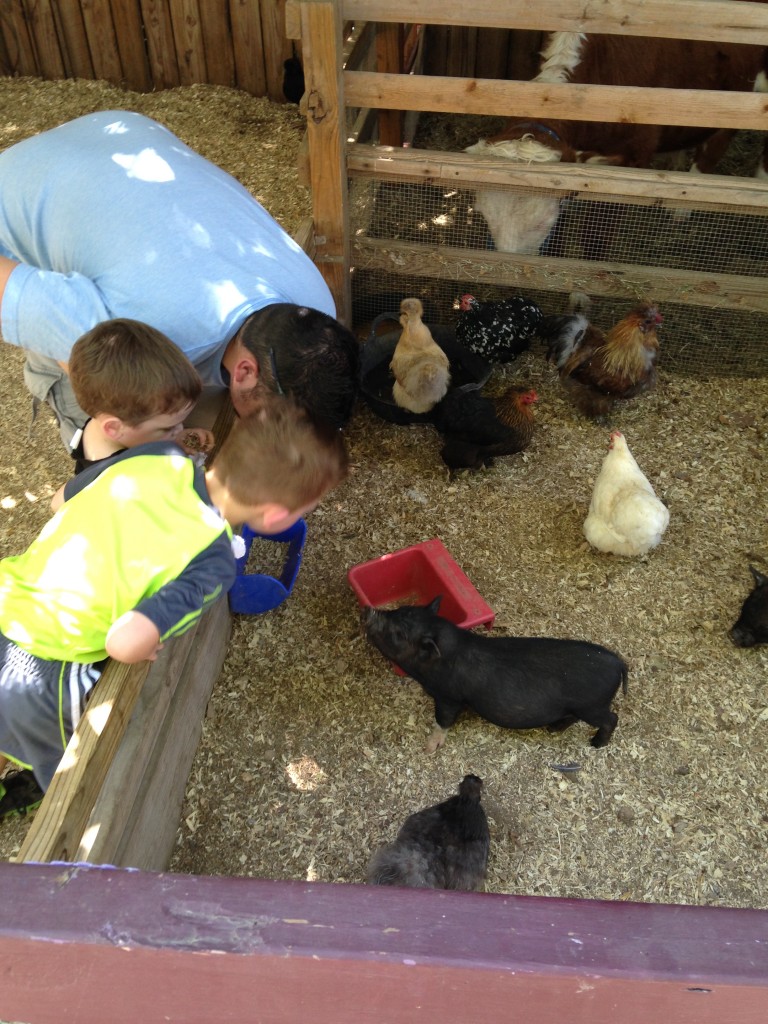 There are little games around the Faire to play, too: 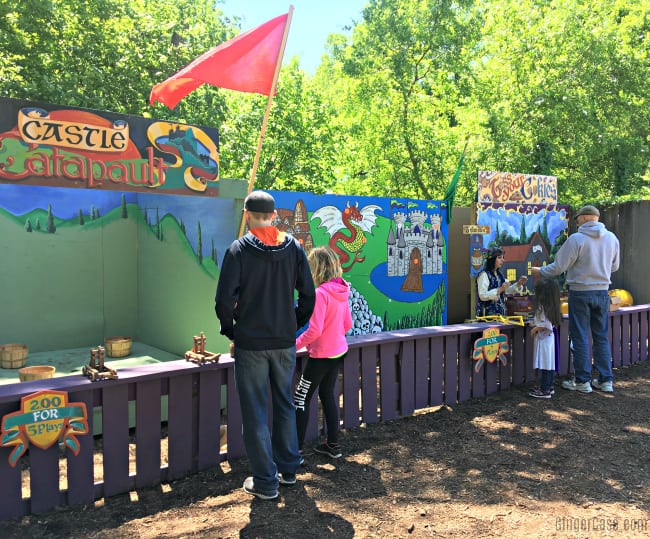 Don’t miss the hundreds of shops, either! 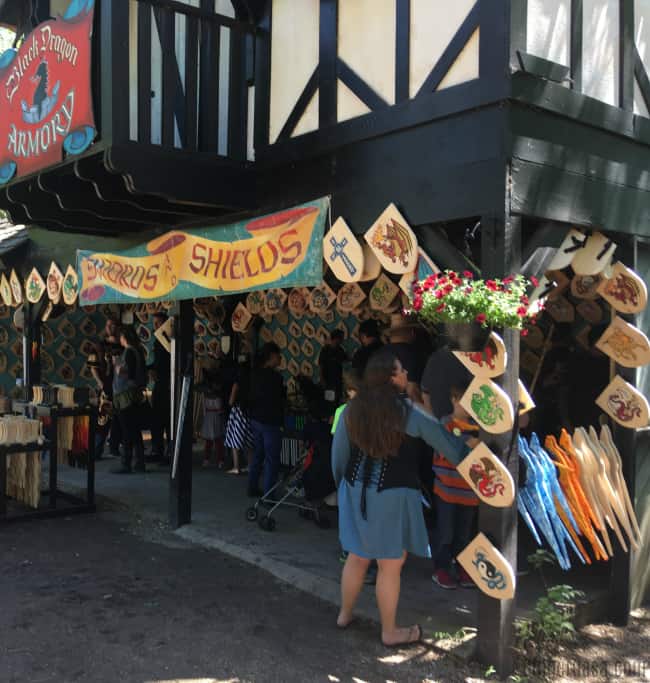 Other fun things that we will have to see on our next visit:

We went on a day that was perfect.  I wore a light jacket and sunscreen and the boys didn’t and were just fine.  As summer approaches, it does get much more hot, so plan accordingly.

The parking goes on forever and ever, so we were glad to get a relatively close parking spot when our day was over! 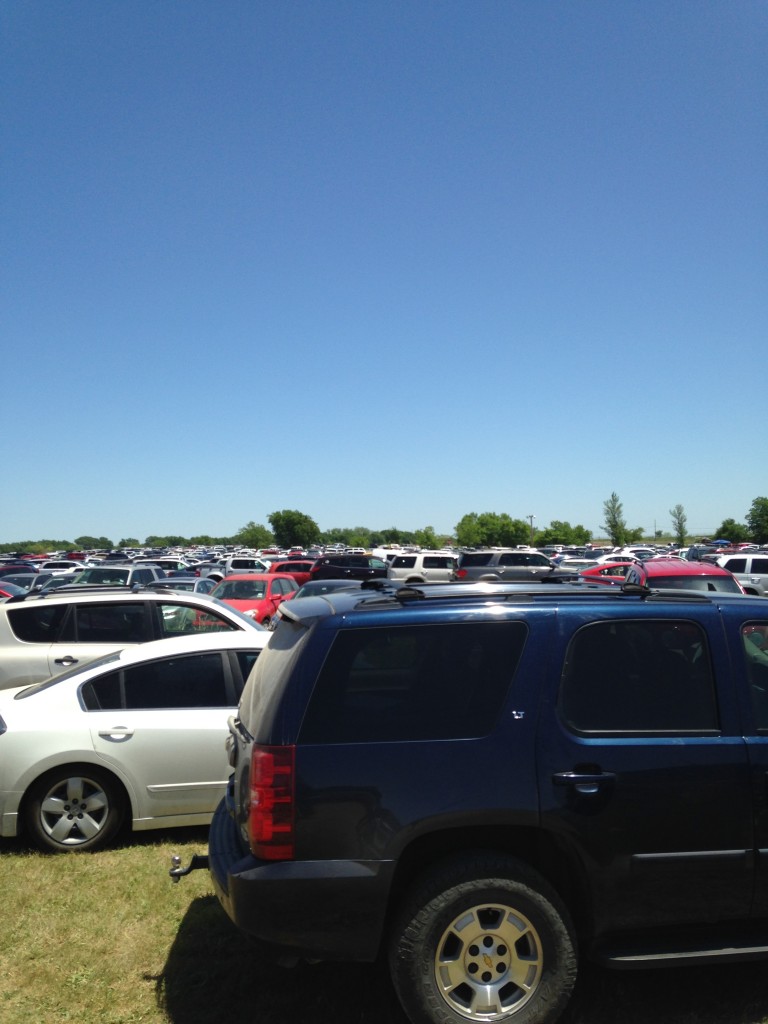 Tips for traveling to Scarborough Renaissance Festival with your family:

Have you been to Scarborough Renaissance Festival?  What was your favorite part?  If you haven’t been, plan a visit soon!

Check out some other kid friendly things to do in DFW!

My family will be attending for the first time this year and your post was very helpful and I planned on taking a lot of water. With the rides and things, I need to start saving so we have spending money while there.

You'll have to let me know how you like it!

A Full List of Kid Friendly Dallas and Ft. Worth Things To Do

Don't miss out on the magic of Scarborough Renaissance Festival! - Thrill of the Chases

We had so much fun, too! I loved going and can't wait for next year already!

Aaaaah!!  I've been dying to go since I moved to TX!  Looks like you had a wonderful time.  Although I haven't been to the Scarborough Renaissance Festival, I've gone numerous times to a similar one in MN.  There's something so fun about "going back in time."  And I, in particular, am all about the food!

Yes, the food makes it all that much more wonderful!  :)