Parenting.  It’s a never ending learning experience.  All kids are different.  You know all of the sayings.  So, Baby Brother takes a lot of naps in my arms, in the carseat, or in the Boba, which allows for a lot of time with the good ol’ smart phone.  As Baby Brother was napping in my arms this morning, I happened upon this tweet from Jon Acuff this morning and you know, it’s good: 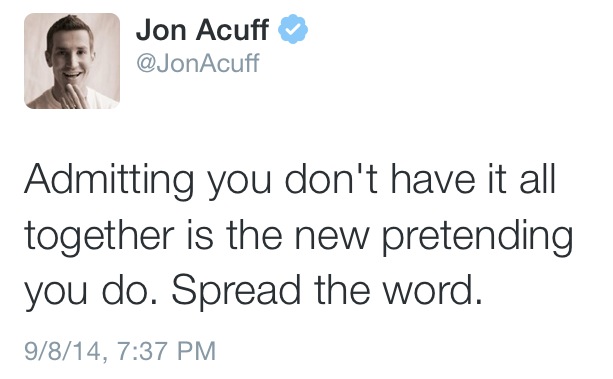 I love to post pictures of my family because that’s about all I have the time for.  Blog posts take time to conjure up.  And I am THRILLED to read blog post after blog post about parents not having it all together.  It IS a trend, but it’s a wonderful one.  Makes all of us moms feel less like the Stepford moms and more real with less guilt.  (maybe)

It seems like I haven’t had a personal post here in MONTHS.  Time has really gotten away from me lately.  Apparently, having three kids is way harder than having two.  All those people who say “going from 1-2 is hard, going from 2-3 is easy” are so, so wrong.  I have really taken it easy with Baby Brother, though, and not being all Nap Nazi has really helped the stress level around here.  The Captain had to be in his crib at all designated nap and bedtimes or else we were doomed for the next 24 hours.  He was a very interesting first child for us.  We did the best we could to survive and he has turned out pretty well, so far.  D was more laidback and thus, made it easier on us.  Baby Brother is laid back like D, but he’s also got his own sleep issues like his older brother.  I blame their sleep issues on one thing:  The Paci.  D was the only one who took a paci and the only one to sleep through the night early on.

But, back to the point.  Three kids has been tricky, but I think we have all settled in nicely after 9 (!) months.  We have also started homeschooling which some would say is beyond ridiculous when you’re looking for less stress, but in our experience, traditional school=stress and anxiety.  Maybe our kids are just super attached, but homeschooling is working well for us.  This isn’t necessarily what we will be doing for the next 18 years, but we aren’t going to stress about it.  It’s working now and that’s all that matters.  All three boys are thriving and I am enjoying spending time with them.  It has been tricky to nail down a schedule that works for us (especially with a baby who doesn’t do crib naps often,) but it’s coming together.  I feel like their little brains are coming alive after a summer of too much TV and neglected blocks, Duplos, and puzzles are finally getting much love.

Baby Brother is into everything.  EV.RY.THING.  Including the potty.  Oy.  The only thing that makes me not cringe about that is the fact that the boys are pretty gung ho about the cleaning toilets chore.  Phew!  We are working on keeping the toilet lids closed or at the very least, the door to the bathroom closed.

Soccer season has started and both the Captain and D are playing.  They’re loving it and different practices on different days has taught us some serious time management and planning skills. I honestly cannot imagine doing anything….ever…if the Captain was in public kindergarten.  Some days we have a whole day to prepare for something simple and we are still late.  How does that happen?  Well, it’s probably due to someone having to um….poop…but well, it happens.

So, yeah, three kids has really made this blog have fewer posts, us to have less sleep, less money, more broken objects, less sanity, etc, etc, but it has been a huge blessing.  We love our little guys so, so much.  Our hearts are full and our family is complete, even though our sentences may not be all of the time. 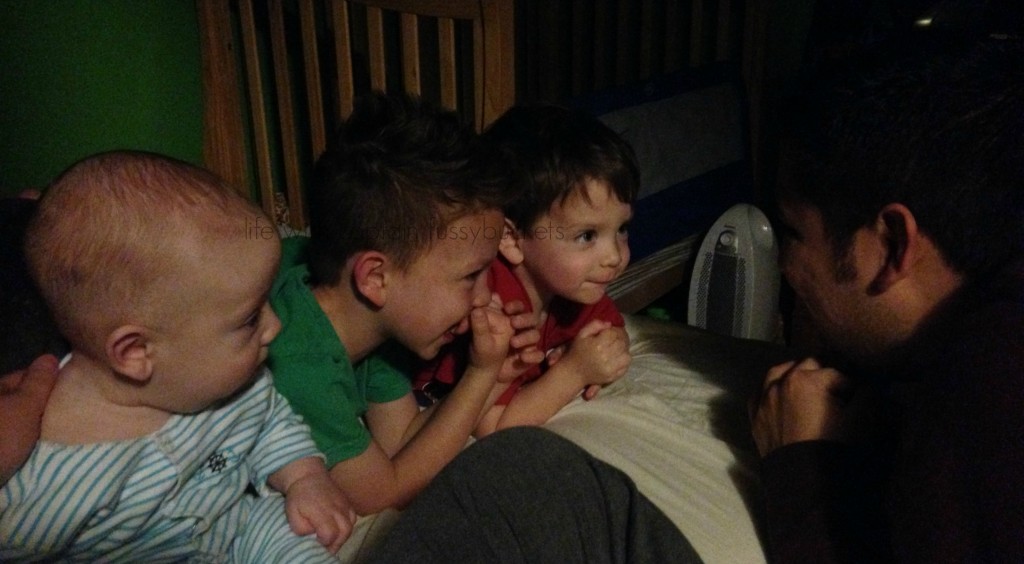