Recently we were faced with the question – "How do we talk to our child about death?"  About a month ago, my husband's grandfather became ill.  It was very sudden and unexpected.  Although he was 78 years old, he was the picture of health.  He had a GI hernia, though, that caused chronic hiccups.  Not just a short bout of hiccups, but hiccups that kept him up and were unrelentless.  He went to the doctor and they referred him to a GI doctor, but the hiccups soon caused him to start vomiting, and he aspirated, causing pneumonia.  He was in the hospital for a couple of weeks, with no sign of getting better.  A week ago last Thursday, he was sent to hospice and died later that night.

The Captain knew that Nino was sick.  He prayed for him dilligently every night for him to get better.  We never took the boys to see Nino in the ICU, but we did get to see Sweet Grandma (which is their great-grandma) while he was in the hospital.  Hubby and I began talking about how we were going to talk to the Captain about Nino when he died, because we knew it was imminent.  We decided to take the honest approach, like we try to do with every situation life throws at us.  The Captain is four, so he's full of questions and also has a very vivid imagination.  We wanted to make everything clear and answer any questions he had, without giving him too much information.

That night, we were lying in bed with the Captain, doing our normal story and prayer time when Hubby wisely told the Captain "do you know how we have been praying for Nino to get better?  Well, tonight we need to start praying for Sweet Grandma because Nino died tonight."  The Captain's reaction surprised us.  He said "So Nino got to go to Heaven?!"  So sweet and so innocent.  We smiled and said "yes, Nino is in Heaven with God."  He had a few questions, like "So did Sweet Grandma look all over the Earth and she couldn't find Nino?"  That's when we realized that he thought that bodies go to Heaven, too, which, he had no reason not to believe that.  We explained that God doesn't take bodies to Heaven….he takes our Spirit.  WOW!  Now that's a hard concept for adults to understand, let alone children!

Since then, he's had a few more questions and we've answered them all truthfully.  We agreed that we should probably not take him to the viewing of the body, but the funeral would be okay.  I could not be more happy with our decision.  The Captain reacted in a way that we really didn't expect, but probably should have.  When it was time to walk by Nino's body, he kept looking at it.  We had told him that the body is here, but the spirit is not, but he still needed to prove it to himself.  He went back to hubby's mom, Grandma, and said he wanted to see the body again.  She took him up there and he asked to touch it, which she let him do.  He touched Nino's hand and that was enough for the Captain.  It was cut and dry for him.  The body was here, but Nino clearly wasn't.  He was in Heaven, with God.  I took that as a great lesson from the Captain.  We tend to overcomplicate things with our mature ways of thinking.  So many people have varying opinions on life and death but we just know what the Bible says and if we simply take it for what it says, it will all be clear.

It wasn't until the Captain saw Daddy and I crying that he started to tear up.  He pressed hard on his eyes and I told him it was okay to cry, but he didn't.  I think he was sad about Mommy & Daddy crying, rather than Nino being gone.  He LOVED Nino, but he was happy that he got to go to Heaven with God.  We will have sweet memories of this godly man who loved us and our children so, so much. 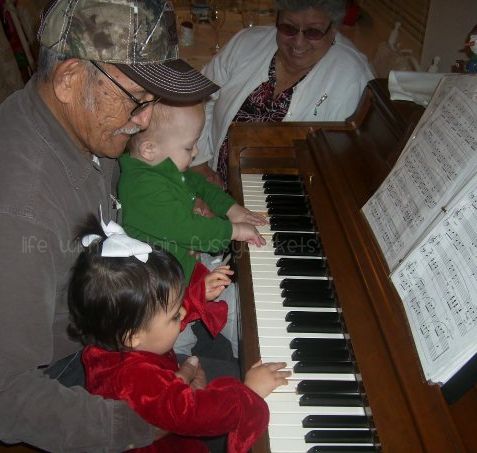 If you're wondering, we also took Baby D to the funeral, with the help of my parents to entertain him during the service.  He doesn't understand at all, but I still think it's best to not shelter our kids from life.  It's our personal belief for our own kids, and that's not necessarily right for every child.  It's our gift as parents….we do what we think is best and sometimes it turns out great and sometimes it doesn't and that's okay.  But we can rejoice in every circumstance that we were given these precious kids to parent!

You handled that extremely well.  I always believed in being honest with my children and giving enough information to cover the topic but not in grueling detail.  I wish it was that way when I grew up, as children we were shielded from everything and found out the hard way.  Found you on Google+ and will be following.

Great post, Gena.  We recently had a pet fish to die and I really didn't know how to handle it with my toddler - actually went about it all wrong.  We haven't had a family member pass away {goodness, I hope we don't for a VERY long time either}, but I know it will be a hard conversation.  It sounds like you really handled it well.

It's so hard to know what to do!  You reminded me....when the Captain's first Betta died...about a month after he got him for his 3rd birthday, I just told him he died and had flushed it before he saw that he was dead.  The second fish that died, a few months later, the Captain wanted to see and ask questions about.  We were just honest with him and told him we were flushing it.  Harsh, maybe, but he handled it well.  That does NOT mean that another kid or even our other second son would handle it well.  I think parenting is all about guessing what's best for our kids most of the time.  :)