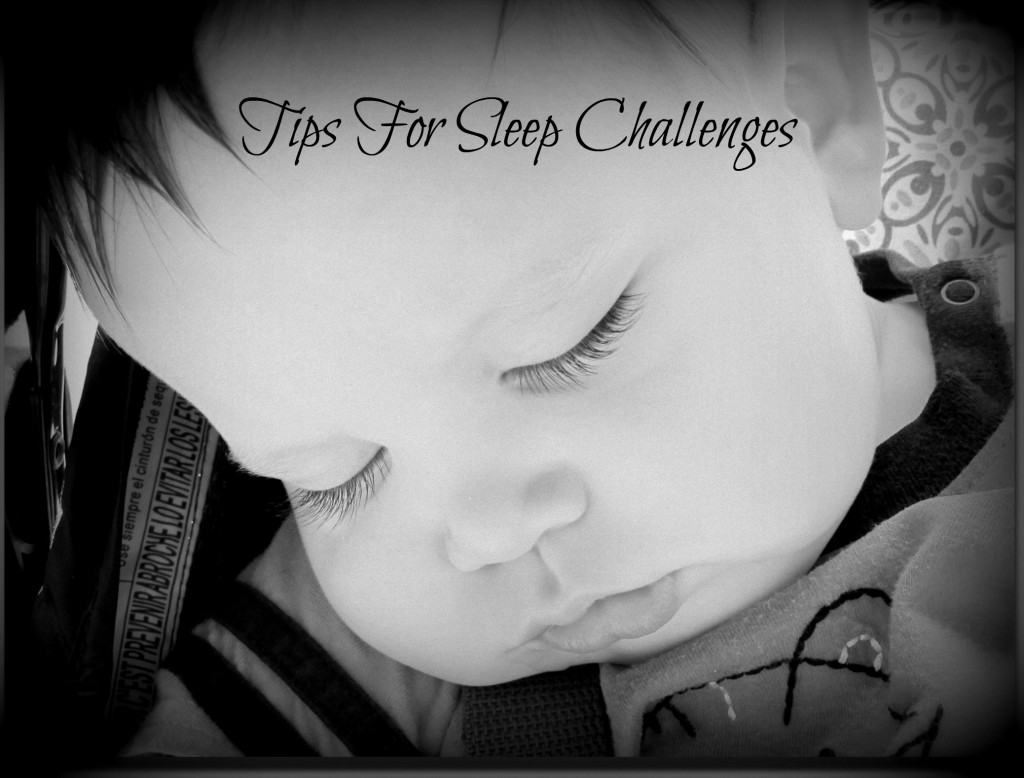 Welcome to the February 2013 Natural Living Blog Carnival: Addressing Sleep Challenges. This post was written for inclusion in the monthly Natural Living Blog Carnival hosted by Happy Mothering and The Pistachio Project through the Green Moms Network. This month our members have written posts about how they address sleep challenges in their homes.

1.  Babywear.  Baby D took many naps in the sling or Beco early on.  He was a catnapper and it helped me get out and exercise or get things done around the house, so it worked.  I was actually kind of bummed when he stopped napping in the carrier!

2.  Don't be afraid of the pacifier.  Captain Fussybuckets never took to liking the pacifier and we didn't force the issue.  Of course now, at four, we're happy we didn't have to break him of the paci, but he did have his own sleep crutches that we had to get rid of.  For awhile, he nursed to sleep and after that, he had to have a bottle, car, or stroller to fall asleep.  After we got rid of the bottle at 18 months, he slept through the night.  Go figure.  But Baby D loves the paci and he's still using it at naptime and bedtime to fall asleep.  No biggie, he won't be taking it to college! 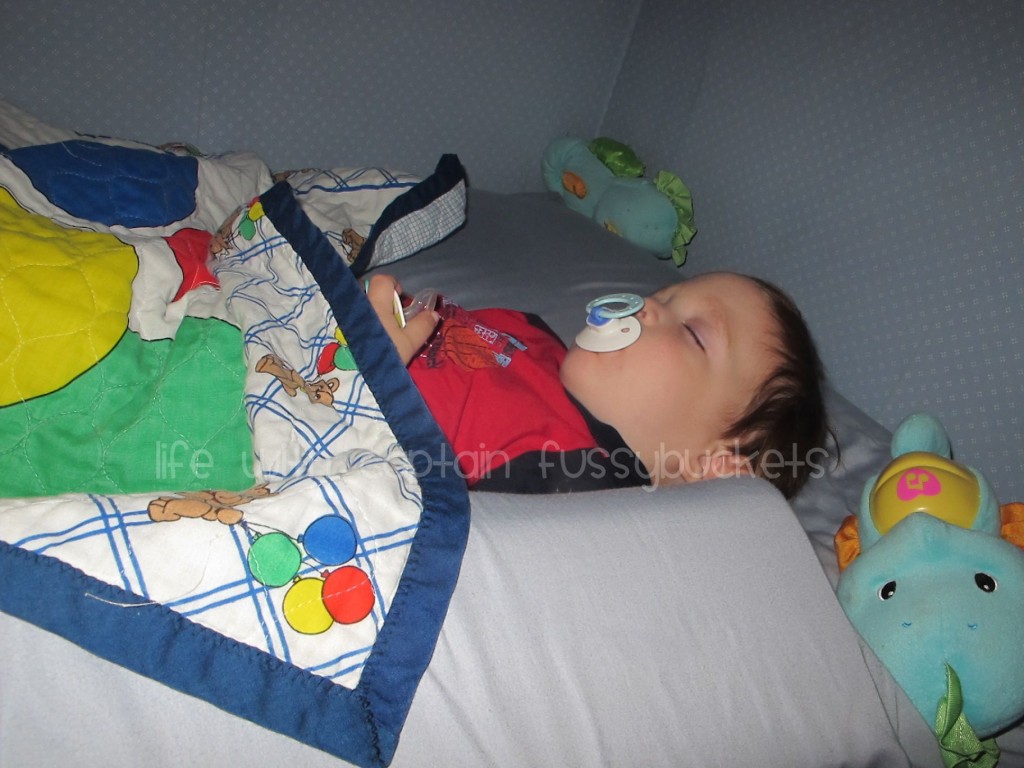 3.  Don't freak out over naps.  Both of my boys were catnappers.  They loved 15-45 minute naps up until they were about 6+ months on. I kept scouring the internet for tips on extending the naps and scheduling them so they'd sleep the same time each day.  It just didn't work for the boys and that's really, really okay.  It stinks because of the "sleep when they sleep" advice, but they're not going to get sick or be horrible sleepers for life or never nap if they catnap early on!  So just go with the flow and do what you can, but know that they'll sleep longer when they're good and ready.  I personally think it's sweeter when they take longer naps later on than be awesome sleepers early on and then teething or sickness or just growing up shocks you into the realization that they are their own little person!!

4.  Have a plan, but have a few back-up plans, too.  Most co-sleepers didn't plan to be co-sleepers.  Well, okay, maybe some did, but most everyone I've talked to says they had great plans to just lie the baby down in their crib and peacefully sleep the night away in their own room.  (ha!) We weren't all night co-sleepers many times, but there were times when we had to be and especially when we were travelling, we were forced to go to Plan B.  Have a few places where Baby or Child can sleep, don't limit it to one place.  This goes for travelling, too.  Not all kids will sleep in a Pack N Play, no matter how nice they are.  There are travel beds, co-sleepers, foam bumpers, mattresses on the floor, and of course, good ol' co-sleeping.

5.  Don't upgrade to a "big boy" or "big girl" bed too soon.  The Captain moved to his own "big boy" bed when he was about 26 months old, when his baby brother was about a month old.  It worked for him.  He didn't realize he could crawl out for a LONG time, but when he did, he didn't stay there.  Baby D is currently 26 months old and I can't imagine him being in anything but a crib!  He is completely content with his crib and no body else is waiting to use it, so it's perfectly fine for all of us.

6.  Get a great monitor for peace of mind.  We have used our Angelcare motion sensor monitor since Captain Fussybuckets was a baby.  We are able to sleep better knowing he's okay.  We also love our video monitor because you just can't be in the same room with Baby all of the time and it helps to be able to peek in on them while they sleep.

7.  Sound machines work wonders.  When the Captain was a baby and waking every 45 minutes at night, we were desperate.  For a few months, we had three sound machines in his room, hoping that they would help.  And they did, but really, three was a bit excessive.  🙂  Now we have air purifiers in all of our rooms and they have worked really well!  You can also soothers, sound and sleep machines, and cute music makers like our favorite, the Soothe & Glow Seahorse.

8.  Be prepared for sleepwalkers.  The Captain began walking in his sleep around 2 1/2.  He would walk into our room in a state of confusion and at first, we'd just pull him into our bed.  After a few nights, we realized this was becoming a habit and he was walking straight to our bed as early as 10:30 PM!  So, we went to Plan C and set up a little couch in the corner of our room.  Since then, he has come straight to that couch almost every single night.  We've gotten used to it and well, again, he won't be doing it in college so it's okay.

9.  Choose a bedtime that is best for your family.  We used to get the Captain to bed by 8 PM every night.  We just thought that was a good time for a baby to go to bed for the night.  But, when we moved to work as houseparents at a children's home, we realized that a bedtime wasn't really going to work for us.  We had late night things to attend, not to mention Wednesday night church that ended at 8, I believe.  So, we just went with the flow.  If we had to keep him up late, he adapted.  I remember very clearly the night we stayed up to watch the series finale of "Lost" and took him with us.  I think he finally crashed around 10 PM and he probably didn't sleep in the next morning.  Now the Captain's "bedtime" is between 8:30 and 10, depending on if he napped that day and what we have to do the next day.  Baby D is pretty much the same, although he loves sleep a lot more and actually asks to go to bed.

10.  Do what's best for your family.  Everyone has advice and some even will tell you that what you're doing is wrong.  But, you and your spouse are the only ones who have to be up with the baby every night, so only you really have a say.  If co-sleeping feels right, do it.  If sleep training feels right, do it. If it's working for you, your spouse, and your baby and it's safe, then, it really is up to you. 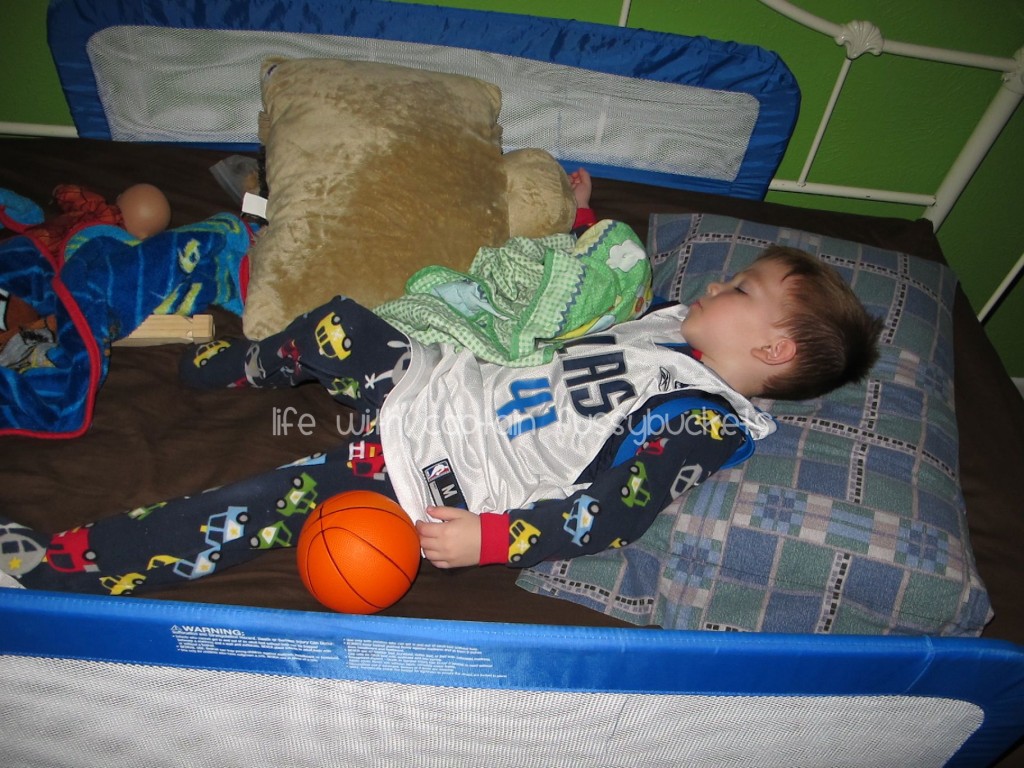 If you have any great sleep tips or stories, I'd love to hear them!

Visit Happy Mothering and The Pistachio Project to learn more about participating in next month’s Natural Living Blog Carnival!

These are great tips. It's so hard because mom and dad are so tired too, that often we'll do anything just to get some sleep. It's hard to remind ourselves that sticking out a plan will help us ALL in the long run :)

Babywearing is such an easy way to get little ones to sleep. I love it. I also totally agree with not transitioning to a big kid bed till they are older and ready. You want them to be old enough to really grasp the concept that they need to stay in bed.

I tried babywearing with my first and he took to it most of the time but I could not depend on it.  He was too eager to see what it was I was doing when I would wear him.  He loved it though when I would sit still and wear him.  Now he is an extremely cuddly toddler and I love it!  We're trying to break him of the bottle to go to sleep right now.  He never really like the pacifier either, but the bottle at bedtime is his crutch.  He is actually doing quite well with the weaning though.

I totally agree with no upgrading to a big kid bed too early. I think parents rush it too much and then regret it when their little ones get up too early. That happened to us too.

I love your advice that each family and child is different.  Doing what works best for your family is the right idea.  My daughter sleeps with a paci too and she is 26 months.  It's good to know she won't be taking it to college with her.  :)

haha!  Thanks for the encouragement!